After celebrating a huge success with their flagship product Dehumaniser II, voice processing software developer Krotos upped the ante with a condensed, more affordable plugin called Dehumaniser Simple Monsters. Including just the core features of Dehumaniser II, arranged into a neat and simple interface, Simple Monsters is geared towards people who are looking for quick and convincing voice effects in real-time, without having to study a tome of a manual first.
Dehumaniser Simple Monsters is available as a VST, AU and AAX plugin, both for PC and MAC.
Let us take a look together and see if we can wake the inner demons with this neat little piece of software.

With Dehumaniser II (which we also reviewed on TAS), Krotos marked a new milestone in voice effects processing, allowing you to create vocal and monster effects ranging from subtle to beyond recognition – all from within one single plugin. While for Dehumaniser II, Krotos decided to go for a modular approach, allowing you to freely connect effects modules with each other, in Simple Monsters, you are given a set of fixed effects or effects suites.

Through a streamlined interface, consisting of six FX sliders and a so-called Scrubbing Convolution Module which derives from the original Dehumaniser II, you’re able to mangle either your own voice recordings or pre-recorded material in real-time to morph them into all sorts of strange creatures, monsters and demons.

With sound designers and voice actors in mind, who want to be able to control the vocal processing themselves while recording in the booth, Dehumaniser Simple Monsters offers thorough remote controlling options via TouchOSC for iOS.

After your purchase, you’ll receive an email including a download link for the software along with an activation code. The authorization and activation for Dehumaniser II is iLok-based, so you need to at least have an active iLok account in order to use the plugin. After the installation, you can just start up your DAW of choice, load up Simple Monsters from your plugins menu and upon the first start will be greeted by an authorization window. This is where you need to enter or paste in the activation code from your email. After that, you just have to log into your iLok account (with internet connection enabled), and activate your license.

With the plugin activated and ready to use, let’s take a look at Simple Monsters’ interface.

Like I said before, Dehumaniser Simple Monsters’ interface is well organized and easy on the eye, which allows you to focus on the sonic qualities of the plugin. On the right side, you’ll find five different effects sliders, namely:

A very important thing to know, is that every slider interacts with the other sliders in a symbiotic way. This means that changing a certain parameter on one control, affects the other ones in return, resulting in a wealth of different tones. Another vital fact to understand is that every FX slider not only controls one single effect, but rather a complicated array of processing parameters and filters. Although it would be interesting, to know what goes on exactly, leaving the complicated part of the processing behind the curtain leads to a greater ease of use. 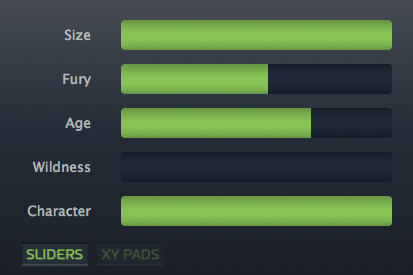 Fortunately, Simple Monsters’ reference manual provides some clues on the actual effect of sliders. The sliders Size and Age control the pitch of the audio material and work in relationship to each other. While Size can be seen as a coarse pitch shifter ranging from the voice of a child to that of a giant, the Age parameter acts in a bit more delicate fashion. It seems to also simulate a “throat length” effect, with which you’re able to turn a female voice into a male (and the other way around).

Fury seems to add a certain type of noise overlay to your recording, making it sound more or less aggressive and angry.

The slider labeled Wildness acts like a randomizer, adding processing variations in pitch and filtering when turned towards the right end.

The amount of the overall, combined processing is controlled by the Character slider. It feels like a sort of dry/wet control for the effects, but it also effects the dynamics and feel of the effects applied.

Utility-wise, you’ll also find two additional rotary controls on the interface. While the first one controls the dry/wet mix of the plugin, the “Stereo Spread” control allows you to expand the stereo width of your signal. It will also “stereofy” a mono signal, depending on the amount you dial in.

On to the next important feature: the Scrubbing Convolution Module. Represented by its own little GUI and a waveform, this module is a convolution-based effect that allows you to overlay any sound file with your original voice recording while dynamically responding to the recording’s attributes. Put simple, you can take any sample (let’s take one of a roaring lion for example) and add it to your voice recording. Depending on the amount of sample level, you dialed in with the Sample Playback Level slider below, the sonic characteristics of the lion sample will be more or less layered on top of your original recording. In our case, this would result in a voice, sounding like a sort of wildcat-human/beast hybrid. While Krotos already provides you with a host of different animal samples from otters and parrots to leopards and walruses, you’re free to choose any of your own samples and load them into the engine via the file menu above.

Another part of the Scrubbing Convolution Module is the actual scrubbing part. Realized through a granular engine that analyzes the sampled you loaded, you’re able to scrub (moving within the audio file) through the sample depending on the amplitude of your incoming signal.
This results in the sample overlay sounding much more organic and responsive to the audio recording.

Via the nodes in the waveform display, you can choose the start and end points in between which the engine should scrub as well as adjust the responsiveness to the incoming audio signal. To reset the graph you created by clicking and dragging the notes, you simply click on the Reset Graph button.

Finally, let’s have a look at Simple Monsters’ remarkable X/Y pads. Accessible via the “X/Y Pads” button below the sliders, you’re provided with two independent X/Y controls you can assign different parameters to. Well, independent only to a certain degree since like you may remember me saying earlier, all of the effects parameters work in conjunction. I think, this is the overarching concept behind Simple Monsters’ – everything affects everything.

Now, assigning a certain parameter to either the X or Y axis of one pad, is as simple as clicking on the roll-down menu below the pad itself and choose an attribute. Of course, attributes you already assigned to another X or Y axis are greyed out and not assignable twice. When you’re finished choosing parameters, you can hold and drag the white dots in any direction to change multiple processing effects at once over time. Any changes made on the X/Y pads will be reflected by the sliders in the bar view. Needless to say, you could also assign the XY controls to a MIDI controller, which brings us to the next topic:

As I mentioned in the beginning, Simple Monsters offers complete integration with the remote controlling app TouchOSC. Touch OSC features a protocol for communication among computers, sound synthesizers, and other multimedia devices that is optimized for modern networking technology. This way, you’re able to remote control every parameter of Simple Monster’s interface from your mobile phone or tablet. It supports the idea of being able to control your voice processing yourself while recording, without the need having to sit in front of your computer. A great feature, especially for self-recording voice actors. 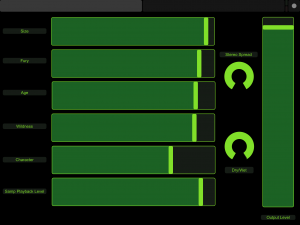 In order to remote control Simple Monsters reliably, you obviously need an instance of the Touch OSC editor on your computer, as well as the according app installed to your mobile device of choice. The second thing you need is a template for the original plugin. Luckily, Krotos has done its homework and provides you with a free, pre-programmed template for TouchOSC which can be found in the program folder. You can then transfer the template to your TouchOSC app using the aforementioned editor on your computer and should be good to go. Simple Monsters’ manual walks you through the setup process very descriptively.

The sound of Krotos’ Simple Monsters is quite hard to describe since it’s pretty complex and has a lot of different processors involved. This leads to many possible tonal options reaching from subtle voice manipulation to downright ferocious monster effects. While most pitch shifters tend to destroy the intelligibility of voice recordings when pitched down too low, with Simple Monsters and the help of some slider movements, you’re able to get low rumbling, but comprehensible voice effects. While at the extreme edges of settings, you have to live with some audio artifacts like small delays and weird modulations, searching for the parameters’ sweet spots and letting them work together (via the X/Y pad) yields the best results. Also, making good use of the convolution-based sample scrubbing feature helps, to achieve convincing sounding monster and alien effects.

One thing I was missing, is an option to robotize voices. While providing lots and lots of organic voice processing effects, it would have been nice also being able to create some Transformer-ish types of sounds. Of course, this is easily doable by placing a vocoder after the Simple Monsters plugin, but it would have been a plus for me, if it was directly featured in the software itself.

Krotos brought the core features of its flagship voice processor Dehumaniser II together and compressed them into a clear and easy-to-use interface. Simple Monsters offers you a very broad range of possible voice effects, ranging from the sound of tiny creatures to giants and orcs. Two of the most important features for me are that it achieves this from within one single plugin and that it does so in real-time. This way you can work out the desired sound directly while recording. The Sample Scrubbing Module is a useful and important addition to the five effects sliders and helps achieving a more convincing effect. Another clever solution is Simple Monsters’ remote controllability, making it a breeze for voice-actors to control all the parameters from within the recording booth.

For a rather small plugin like this, the price of £149 ($184.00) seems a bit high at first, but given the amount of effects processors included which work in the background, kind of makes up for this. This is especially true if you think of the number of plugins you’d normally have to buy and chain together to achieve a comparable sound.

If you’re not sure if Simple Monsters is for you, you can download a free demo of the plugin to try it out. Also, students are given a 50% discount on Simple Monsters.

In my opinion, Dehumaniser Simple Monsters is the perfect solution for self-recording voice actors and small to medium post-production studios. It’s easy to use, fun to play with and features a whole lot of tonal options to create most of the monster sounds you can imagine.