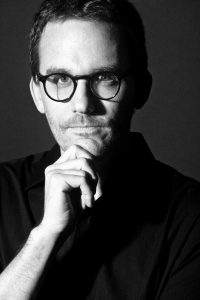 SuperMansion, 6 Ways to Die, House of Purgatory, The Confidant

Tell us a little bit about your background and how you got into film/tv scoring?

I had the chance to compose filmmusic for a couple projects right after I got out of college without knowing much of the mechanics of filmscoring. I remember a good friend of mine saying, “If you’re serious about this stuff, they teach filmscoring in the states you know…”. Half a year later, I was enrolled in the UCLA filmscoring program studying with Gerald Fried, Robert Drasnin and Christopher Young. It was actually a couple years earlier that Chris Young’s score to “Hellbound – Hellraiser 2” made me explore writing for films. I remember watching this film as a horror buff thinking, “I had no idea you could write this kind of music for a film like this.” The score to this was like an epic homage to the entire genre. I was hooked.

While I was at UCLA I continued scoring small films and student projects. I also met my Wife there.

You were born in Switzerland. Do people there look at the composing world different than people in the states?

I was lucky growing up in a rich and diverse culture. We had so many wonderful theaters and concert halls, even locally. My mom used to take me to the symphony, plays and recitals on a regular basis. I learned to appreciate a wide variety of music from a young age.

I think it’s in the Swiss gene to be meticulous with attention to detail and an insane work ethic. You need that in this business for sure. I’m known for having very detailed mock ups. What the director hears during the ‘show and tell’ session is very close to what will be heard in the final recording.

Although I grew up on Mahler, Tchaikovsky and the Straus and Sibelius tone poems, I’m always discovering new music and artists and try to never stop evolving. I’ve always been like that. Most certainly studying at UCLA made me think about music in a different way. That’s where I discovered some of Jerry Goldsmith and Bernard Herrmann’s great recordings. I remember studying with Bruce Reich and learning a completely different approach to counterpoint. He also turned me onto Penderecki, Ligeti and Arvo Part which opened up a whole new dimension for me.

How did you prepare for SuperMansion and what would you say was the most difficult part of making the score for this season?

Animation in general can be challenging because you are scoring to animated storyboard quite a bit. While the voices are recorded very early on and cut into the animatics, there is a lot that you can miss as a composer especially on action sequences. You really have to fill in the gaps a little in your head when you’re working that way. On the upside, I think it can also free you up to approach a scene in a way you may otherwise not. It allows you to not get so focused accommodating all these hitpoints—and there are a lot in animation—but focus on the natural flow of the music. You’d be surprised how many things can fall into place when you get that part right.

On Season 3 of SuperMansion, it’s a real treat because I do actually get a lot of the final animation in my work-prints.

How did you keep your score “fresh” when you are on a TV series over the course of 3 seasons?

The animations, actors and storyline are my inspiration. Every episode always has something new and outrageous. On a show like this, I think it would be hard to become “stale”. Zeb Wells, the Creator of SuperMansion, is terrific to work with. He is open to creative and crazy ideas and has allowed me to push things a little further. He actually lets me cross the line without being worried of going too far. That’s where it gets really fun! Every season also has a couple of ‘Special’ Episodes where we change up the musical palette completely. In the Summer Special, which aired this past August, the score is actually very much retro influenced. We wanted to make it like our favorite shows we grew up with: Hawaii Five-0, The A-Team and The Brady Bunch. I absolutely love TV scores from the 70’s and 80’s. We ended up with lots of bowed Vibraphone, Percussion and a smaller String Section than we usually use. We also recorded a Drum Kit in mono with a single microphone to get the right sound. We have an episode coming up where we pay homage to the 80’s and 90’s Time Traveling action movies.

You have published several albums with Universal Music’s Killer Tracks. Can you talk about those and what sort of vibe they are?

It’s been fantastic working with Killer Tracks. The albums I did with them are mainly investigative, suspense, horror and we also did a cinematic/emotional type album that seems to pop up on every other show I turn on.

In your bio you refer to some of your work as razor sharp electronic. Can you talk a little bit about this and how you get that sound?

A lot of my contributions to the Superhero genre and Trailer Music world have been hybrid orchestral, a mixture of a conventional orchestral pallet with a lot of electronic synth and drum elements. Even industrial at times. I love the full range of the orchestra but always look to experiment and mix sounds to keep it fresh if the project allows it. Although my main influences in my orchestral scoring have been Mahler, Tchaikovsky and the Straus and Sibelius tone poems, I’m always discovering new music and artists and try to never stop evolving. I’ve always been like that. My playlist is filled with female Heavy Metal artist right now.

What tools and technology are you currently using?

I’ve been a Cubase user for many years and would be lost without it. It’s a fantastic and incredibly deep workstation. Two iPad Pro’s are at the center of my desk running all sorts of macros, shortcuts and preprogrammed functions for Cubase. These things save me several weeks in time every year. It’s something that has developed over the last five or six years and we keep changing and adding to optimize the workflow. I run one DAW in my studio with four networked Sampler Machines, a dedicated Video Slave System and a centralized File Server for project, office and shared files. These days I mixdown even the demos with a Music Editor and a wide Stem set for safety. My main preamps are the NEVE 88RLB and 1073. The 88RLBs are my go-to for all instruments and DI. The 1073s I mainly use for Vocals. The final masters and stems are delivered in Protools.

Do you have a go to instrument?

Although I was a Guitarist for many years, when I’m working out themes, ideas or just simple moods for a project, most of the time I start at the piano, which I find more organic than sitting at my sequencer. I have a Yamaha Studio Upright which has MIDI in and out’s that are hooked up to my MacBook Pro writing station. I then transfer the sketches to the main DAW after that.

When I first started out I used to focus way too much on individual moments instead of the bigger overarching architecture of the filmscore. These days I like to say, “You score a film – not a scene”. That may sound a bit nebulous, but think about it.

It’s so important to know the business aspects of music. I certainly wish I had understood more about Performing Rights Organizations and the royalty side when I first started out. I had a bunch of music playing on some major programs. Many years later, I realized I could’ve received substantial residual income from those gigs.

In this interview, we talk to composer Brandon Roberts about his work on Unbroken: Path to Redemption - An unbelievable true story of Olympian and World War II hero Louis Zamperini. END_OF_DOCUMENT_TOKEN_TO_BE_REPLACED

In this interview, we talk to composer Kurt Oldman about his work on a SuperMansion series and also touch on his past work. END_OF_DOCUMENT_TOKEN_TO_BE_REPLACED

In this interview, we talk to Gaayatri Kaundinya about her work as a composer and singer on The Hundred Foot Journey, Jungle Book and Million Dollar Arm. END_OF_DOCUMENT_TOKEN_TO_BE_REPLACED