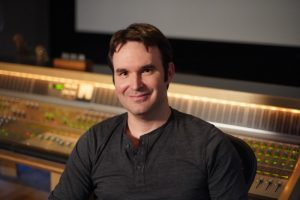 Hi Brandon and thank you for taking time and doing this interview. Let’s start by introducing yourself and telling us a little bit about your background in music?

My name is Brandon Roberts, and I compose music for film and TV. I grew up on the Monterey Peninsula, which has a huge music community and history, so I was very fortunate early on to be exposed to jazz. In high school, I even got to serve burgers to Alan Silverstri who lives up in Carmel. During my time studying music at USC, my jazz interests sort of evolved into film composition and I haven’t looked back since.

How did you get involved with the upcoming Unbroken: Path to Redemption?

There were four people who were integral to my involvement: Mandy Mamlet, the music executive at Universal Pictures, Matt Baer & Lisa Gooding, producers on the film, and director Harold Cronk. I had a couple of meetings with all of them and we discussed the musical direction at length before they hired me. Probably the biggest plus was that we were all on a similar page regarding our vision for the score: we wanted the music to feel like it was in the same world as the original film, however, it had to follow this new chapter in Louis Zamperini’s life.

What were some of your sources of inspiration for the music in Unbroken: Path to Redemption?

I loved Alexandre Desplat’s score for the original film. I thought he captured that phase of Lou’s life perfectly. However, in Unbroken: Path To Redemption, much of the drama shifts from the war to internal struggles (with PTSD and alcoholism, for example), hence my score had to explore new territory to complement this. John Williams is an omnipresent inspiration for most film composers, I believe. In this case, much of the score for Unbroken: Path To Redemption utilized clear themes and a large orchestra so there is no better inspiration than the king.

Can we get a little bit of the insight of your creative process for the film?

Harold and I joked about my “day of panic” which is my first day writing on a new film. It involves comfort food and despair. However, soon after, I find something to latch onto that becomes the core of the music. In the case of Unbroken: Path To Redemption, it was incorporating authentic World War 2 artillery shells into the score to evoke Zamperini’s nightmarish flashbacks to the suffering he endured as a POW. I acquired the shells on eBay and then explored every possible sound they could make. Since they are brass, they have an unbelievable resonant quality and were perfect for ambient, rhythmic, and even melodic ideas. I processed and sampled them and, in the end, the weave their way throughout the entire score creating a subconscious harkening back to the war. Simultaneously, I created two thematic ideas: a love theme for Lou and his wife Cynthia, and a heroic theme for Lou’s finding of peace through his relationship with religion and Billy Graham.

What would you say was the difficult part of scoring Unbroken: Path to Redemption?

The most challenging aspect was finding an effective way of evoking Lou’s internal struggles, musically. I was very careful to find the right balance between music as a supportive role and music as a guiding emotion. Sometimes the score had to evoke an emotion that wasn’t necessarily reflected in the action on screen, but clearly was the crux of the sequence. These moments required a lot of thought and trial-an-error, but were incredibly rewarding when done right.

What would you say was the most exciting part of Unbroken: Path to Redemption soundtrack?

I count myself very fortunate that there is one! Some of my favorite scores do not have soundtrack albums so I got very lucky. It’s testament to how much support there was for the scoring process and dedication to Lou’s story. In addition, the band Switchfoot recorded a wonderful original song for the film entitled “You Found Me”. It is the first track on the album and beautifully captures the film’s message of hope in the face of adversity. The album then dives straight into the score, which musically tells the story of the second half of Lou’s inspirational life journey.

What are you working on right now, and can you tell us more about that project?

I just finished co-scoring a film called Underwater with Marco Beltrami starring Kristen Stewart. The film is a thriller that takes place on the ocean floor. Sound is perceived very differently underwater, so it was a unique challenge. Presently, I am working on the score for a cool TV pilot about witches called, Motherland, set in an alternate America. It’s a crazy premise, but works really well.

I tend to write on the piano and on the computer (specifically, Digital Performer). That is where I make the synthesized mockups before recording with the orchestra and soloists. I also incorporate a lot of original sound design and thematic elements at the beginning of the writing process. This could be processed live-recorded elements, like the artillery shells, or fully synthesized elements like my modular synths. It just depends of the project. However, these elements always get popped back into the computer for manipulation via a variety of plugins. A few that I love and use frequently are Soundtoys, FabFilter, and UAD plugins. Recently, I’ve gotten really into hardware synths like the Moog Sub37, the DSI Pro2, and a modular rig I started building.

Be patient. When I first started out, if someone were to tell me it would take 10 years to start getting some of my own notable projects, I simply wouldn’t have believed them. But in hindsight, it takes time to build all the necessary skills and relationships. Also, I would encourage finding someone whose music you admire, and asking if you can help in any way. Yeah, you might be getting coffee for a while, but you will pick up so much knowledge just being in that environment. I am fortunate to have worked with some very talented composers including Bear McCreary, Christopher Lennertz, Marco Beltrami, and Buck Sanders and I have lost count of the ways they have influenced me.

Brandon, thank you so much for taking the time and answering my questions! I wish you all the best for your future projects.

You are quite welcome, and thank you!

In this interview, we talk to composer Brandon Roberts about his work on Unbroken: Path to Redemption - An unbelievable true story of Olympian and World War II hero Louis Zamperini. END_OF_DOCUMENT_TOKEN_TO_BE_REPLACED

In this interview, we talk to composer Kurt Oldman about his work on a SuperMansion series and also touch on his past work. END_OF_DOCUMENT_TOKEN_TO_BE_REPLACED

In this interview, we talk to Gaayatri Kaundinya about her work as a composer and singer on The Hundred Foot Journey, Jungle Book and Million Dollar Arm. END_OF_DOCUMENT_TOKEN_TO_BE_REPLACED