Today I am going to explore the world of contact microphones. Contact microphones are different from normal traditional microphones since they are designed to sense sound vibrations through solid objects. One of the most famous uses of a contact mic was done by sound designer Ben Burtt when he attached one of them to a metal wire and then hit the wire with a hammer. The resulting sound was used as the laser blast sound in the Star Wars movies. In this review I am going to take a closer look at the C-series contact microphone handmade by Jez Riley French.

I could not find the basic technical specifications for this microphone but here is a list of features that Jez mentions on his website: 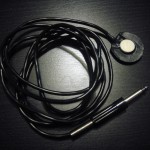 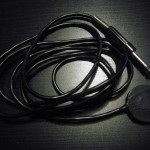 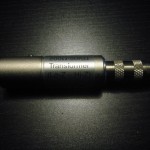 The first thing I recorded was a cordless hair clipper. I decided to experiment and try to place the clipper against a metal drying rack. I attached one of the contact microphones to the body of the rack with regular adhesive tape, started the clipper and began recording. At this point I didn’t know the hair clipper was almost out of power so I was pleasantly surprised that recording was on when it finally died out. Here is the recorded result of that event.

The first test was a success and I was hooked. I was also quite impressed by the sound quality and the low noise floor of this little microphone. I immediately wanted to test it out more and especially both mics together as a stereo pair. I decided to record the metal kitchen sink so I attached the microphones underneath the sink with tape and then filled it with water. I started to record short water gurgles by opening the faucet in short bursts and I was blown away by the result! The recording had nice deep bass frequencies mixed with the surprisingly clear water gurgles. Here is the edited version of the original recording accompanied with a pitched down version as well.

A work colleague brought his 3D printer to work and of course I asked to record it after work hours. I wanted to hear what the X and Y-axis motors sounded like with contact microphones attached to them. This time I decided to use blu-tack to attach the microphones to the motors since there was not enough space to use tape. I did some test recordings and noticed that the sound was “off” somehow so I checked the microphones and they were okay. After a while I decided to use less blu-tack so I could get a good stable contact with the motors. This seemed to work nicely and off I went to record an hour and a half of rich full sounding mechanical motor sounds. Here is a brief edited sample of the 3D printer recording session.

Last but not least: I recorded some nasty stomach rumble sounds while having a stomach flu. At first I had some difficulties of locating the best source for the sounds but soon I found a good spot for the microphone on my stomach. Again I encountered the handling noise issue when holding the microphone in my hand. This is not a fault of the microphone since they are designed to pick up sounds this way but it’s important to bear that in mind when using these. The following sound example is pretty gross but really awesome too so listener discretion is advised!