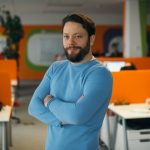 Hi Rok, thank you for taking time and doing this interview. Let’s start by introducing yourself and telling us how you started working as a sound designer?

Sound and music have been a part of my life as long as I can remember. Half of my family is musical, so I was surrounded by instruments, synths, microphones and mixers from an early age. I played around with ukuleles and various keyboards as a kid, but it wasn’t until I got my first PC and discovered software like Cakewalk, Cubase, and Reason that I first started to get more serious about sound in general. To have a complete control over the whole process of creating and producing music from scratch with a PC really fascinated me. I started learning about DAWs and audio techniques, plugins and mixing when I was around 16. During this time, I also took some courses on audio production. But I was also generally curious about a lot of computer stuff like 3D, animation, graphic design, web design, programming and video. And I wasn’t the only one – at that time, online communities and message boards were growing and I became part of a large community of digital-oriented creative people in Slovenia called 3delavnica (3D workshop). We shared knowledge about our online and offline projects, and grew and learned from each other. As the only person amongst the graphic, video and 3D group with audio knowledge, I was the go-to-guy for any project that needed audio. That included everything from random 3D animations, video projects, DJing and some really cool but never finished indie games. Some of the friends I worked on those indie games projects with got jobs at Zootfly. A company that was starting to make an impact in the industry at the time. They need a sound guy, so they invited me to join, and that’s how my professional career got started. What followed was 10 years of unforgettable experiences in game development with a great team that made projects for publishers like Microsoft, Ubisoft, JoWood, Fox Network, Brash Entertainment, Deep Silver, 505 Games, etc.

Talking Tom is one of the most recognizable mobile games. How did you get involved with the company?

Marko Lavrin, an animator at Ekipa2 d.o.o. (Outfit7 subsidiary), was doing sound design for the company at the time, but as the projects and the company grew, he became more and more occupied with animation, so they decided to find a person dedicated to audio only. I had the experience and the knowledge from my 10 years as the main audio engineer at ZootFly. I heard great things about Ekipa 2 (Outfit7 subsidiary) – the fantastic work environment, amazing team, cool projects – because I had some friends working there. So, it was a no-brainer. Ekipa2 (Outfit7 subsidiary) needed a sound guy, and I wanted to be that guy.

The recent game you have worked on was Talking Tom Pool. What were your main responsibilities on the project?

I was responsible for the complete audio-scape of the project from start to finish. That meant finding the right musical style, the composer, the actors. I had to record, find, and design all the sound effects. I was involved in recording, editing, cutting and syncing character voices. I made sounds for the cut-scenes, created the flow transition sounds, the UI, VFX and gameplay sounds. And then, after that, I implemented everything, gathered feedback and adjusted, mixed, tested and polished it all into the final product. It was a lot of work but loved every minute.

How did you approach the sound design for the game and what would you say was the most difficult part of creating the game?

It amazes me how water can create so many different sounds. Try throwing a coin in the bucket of water, a stone in the lake, or just blowing some bubbles in the bath and you’ll see just how many sounds you can get. The sounds water makes were perfect as the base for menus, buttons, and other UI and VFX elements. Because the game is full of water, it was one of the key mediums in the Talking Tom Pool game sound design – even in the parts with no water actually. The difficult part was to mix all the sounds in the sandbox – the hub of the game. It’s a huge area in the game, full of characters that run around, jump in the water, scream, laugh, slide the slides, etc. The sheer number of sounds to create and sync with the animation was huge, so it had to be well-optimized and thought through. We needed to be able to reuse sounds, but not be too repeatable. Proper panning, attenuation, and volume settings had to be set for each sound to make it all sound like a real world full of real characters. And all that had to work well in a 3D space, with the moveable/pannable camera. Plus, it all had to work really well with the music and the rest of the game sounds. None of that would have been possible without the support I received from the great team I worked with on the project – developers, game designers, animators, and more. And one of the most important parts of the great sound experience in the game is the music, composed by Martin Bezjak. He did an amazing job composing the main score.

Did you also record the needed sounds for the game or or did you have help from sample libraries?

When working on a project like this, you don’t want to limit yourself to one medium. Nearly all the sounds created are a combination of different sources, including: my own recordings (past and recent), libraries, musical instruments, synths, composer’s stingers, etc. The actors for character sounds, for example, were carefully selected by auditions and in-house recordings and the foley sounds for the animations were recorded and mixed with some stock audio and some in-house recorded material. The VFX and gameplay sounds, meanwhile, were recorded and mixed with some of the sounds from libraries, as well as sounds of me actually playing in the pool over the summer. And some of the ambient sounds are my of friends’ children playing, recorded on a sunny summer day. A mix of very different sources get packed into any final product.

What sample libraries were most useful during production?

The Boom Library sounds are an amazing addition to our collection, mostly for layering and sweetening some transitions (their Magic and Sci-Fi libraries were particularly good for that). I used some of the Sound Idea’s Comedy and Cartoon Sound Effects collections for the funny character sounds and I used some sounds from Antisample’s – The Plunger sound library for a great addition to water-y blubs and blobs.

You also worked on titles like Marlow Briggs and the Mask of Death, Narco Terror and the The Expendables 2 Videogame, which are quite different from what you are working on now. What would you say is the biggest difference in making sounds for PC/Console games and mobile games?

It’s funny actually, when I was getting started in the game development industry, the Xbox and PS2 were dominating the game console market, but the hardware was actually slower and performance was worse than today’s mobile phones. So, everything was about optimization, compression, and performance. After a decade of Moore’s law, it felt like there were nearly no more limits. It was all about surround sound, large files decompressed into RAM, countless custom sounds and songs, with gazillions of settings and tools for sound designers, letting us literally capable of making magic. Now a small pocket-sized mobile device can do what a PC could do ~10 years ago. It’s all about optimization, compression and performance again. It’s a similarly stimulating time in mobile – rediscovering it all. I’m looking forward to seeing what the next few years bring. It’s an exciting time.

On the technical side, you are quite familiar with proprietary software as well with middleware such as Wwise and Fmod. How important do you think it is for a sound designer working in game audio to know his or hers way around middleware?

Anyone seriously thinking about going into game audio should know how middleware and engines work. Making sounds is just one part of the story. Controlling how the sounds behave in a 3D, uncontrollable game environment, and how to make smooth flow transitions and mix everything in the engine is a big part of sound design for games. If you want to excel in gaming audio, then knowing about middleware and how engines work, how assets are organized and what the logic behind gameplay, animations, transitions, and flows etc. is, will be a great plus. My best advice to anyone looking to start out would be to just jump in and get your hands dirty – try lots of different tools, middleware, and engines. Get involved! You’ll learn a lot.

This one is for the gearheads. Would you mind telling us a bit about your technical setup and the gear you’re using?

It’s pretty basic actually. I’ve got a couple of Rode and Sennheiser mics for vocals and foley, a shotgun mic for outdoor stuff, a couple of M-audio and Blue Sky Media Desk monitors, AKG headphones, a Zoom H6 recorder, one Motu and one Scarlet interface. I’ve also got a Behringer Tube preamp, DBX 166 XS Compressor / Gate / Limiter, and a Komplete Kontrol keyboard. I think that’s it! I guess you can do the rest with the DAW, a good plugin chain, and some creativity.

What do you think was the most memorable moment in your sound design career so far?

There have been a few! But back in the early days of my career, I had a pretty awesome time recording M84 tanks shooting in an actual military drill for Panzer Elite Action. It was also a great experience working with Microsoft Production Studios on Marlow Briggs – I really enjoyed working and learning from the other audio guys on that project. And editing Wentworth Miller’s (Michael J. Scofield) dialog for Fox TV’s Prison Break game and Dolph Lundgren’s screams for the Expendables 2 game was also pretty cool.

But actually, when I think about it, one thing that blows my mind every day is the sheer number of people that hear my work through my audio for Outfit7. It’s literally millions of people every day! Outfit7 currently has 7 billion app downloads – it’s pretty epic.

If you had any advice for sound designers starting off in the business what would it be?

Get stuff done. It’s rare to find people that get stuff done. If you’re just starting out, find something you can do and finish it. Don’t procrastinate or fidget – just roll up your sleeves and do what you have to do. And you should tackle the most challenging tasks first and learn to love them. You can do this – you don’t need to have a PhD in sound engineering to get into the industry. You will learn and improve on the way and you learn the most by doing. You just need to make a start.

Rok, thank you so much for taking the time and answering my questions! I wish you all the best for your future projects.

Thank you for the opportunity! It was great talking to you.