In this review, we will be looking at the latest Sound Ex Machina’s library called UI Sounds: Futuristic. This library is the third in the UI Sounds series and it features, as the name suggests, futuristic UI sound effects. If you want to know more about the making of the library, check out our interview with Kostas Loukovikas. Let’s begin.

UI Sounds: Futuristic comes in few formats (WAV, MP3 and OGG) and is spread across four main categories. Each category gives you a hint of what kind of sounds you can expect. In most categories, you will also find many subcategories. For instance; In “actions” category there are six more subcategories like “browse, calculations, holograms, etc” and in “notifications” and “selections” categories there are even more subcategories. While it is nice to have sounds spread across multiple categories, there is also a downside of navigating through all of the folders and subfolders. Latter applies especially if you are not using Reaper’s media manager or Soundminer or similar. Not a big deal but I think it’s worth mentioning (we will get to metadata later on). You can always rearrange the folders to your liking.

There are 400 sounds included in the library not including other formats. The library will set you back for around 40 bucks which is sort of a standard price for a pack of this range.

The whole library is available in 96 kHz and 24 bit which is nice but I doubt you will need to extreme stretching or pitch shifting especially since most of the sounds are generated using synths. As for the sound quality, I have to say I like it, but I have few remarks. Buttons category, although useful, feels out of place in a futuristic library especially since most sounds are mechanical. This makes this library less coherent. Same goes for a few futuristic sounds that feel out of place. Not that it is a bad thing but I got this library for a review and I feel I have to mention this just so you know what to expect.

I can’t really say a bad thing about the designed sounds in general. To me, they sound great. Some are a tad too glitchy but in general they work great. It was a nice surprise that not all sounds are designed in upper frequency range, quite contrary, many are in lower mid range of the frequency spectrum. You also get few alarm sounds which are quite cleverly designed and at the same time a bit odd. In the example section of the review you will hear some these sounds as they are.

The metadata is present in all files and it seems to be fairly simple. I noticed the name of the file is also in the BWAV field which is a bit redundant since you can probably find it via filename search. Also, I noticed a weird character in the hologram filename (åologram), which isn’t that big of a deal but some computers might have an issue reading the file. As always I am attaching screenshots from Reaper, Metadata Touch and Soundly so that you can check the metadata yourself. 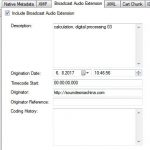 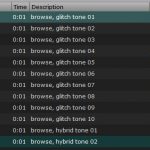 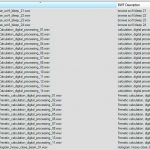 For this example I used the same animation I used for the Binary Code review which you can check here. Although both libraries are in the futuristic domain, they certainly have a different tone.

All of the sounds in the video are used as they are without any effects applied to them. The only thing I did was trim and fade and volume, pan control.

For the price of $39 US + VAT where it applies, I have to say that UI Sounds: Futuristic is a nice addition to your arsenal of UI sounds. Although sounds are arranged in several groups, that doesn’t mean you have to use them this way but it is nice to have an idea of how the developer suggested using the sounds. The library is not 100% coherent but it is well designed and useful.