Brand-new sample library developer Keepforest recently announced their very first product: Evolution: Dragon – and I got the rare chance to give it a test drive before it’s even officially released (release date: December 1st 2016).

Evolution: Dragon is a playable sample collection for Kontakt, consisting of cinematic sound effects and loops that are aimed at trailer music and film music composers.

In addition to that, you’re provided with plenty of cinematic pulses, riffs, rhythms and loops as well as over 120 synth patches.

Let’s take a first look at the library and find out together, what it’s got in store for us!

Apart from providing a wealth of Hollywood-style sound effects from all the typical FX categories, Keepforest’s brand-new scoring tool focuses on easy customization and a simple, but flexible interface structure to make the effects blend in well with your project.

All of the samples of Keepforest’s 3.5GB large library were recorded in 44.1kHz / 24 Bit resolution and are distributed among 99 patches.

In total, Evolution: Dragon comes with:

Since I was provided with a pre-release version of Evolution: Dragon, I can’t tell you much about how the download, installation and activation process will look like with the actual release. However, I will add this part as soon as the library comes out. Since it’s designed as a Kontakt library though, I assume the process will resemble the one you’re familiar with from other libraries.

What I can already tell, however, is that in order to use Evolution: Dragon, you’ll need a full version of Kontakt 5.5.1.

When opening Evolution: Dragon for the first time, one thing that caught my eye directly from the get-go was… well an eye. An animated dragon’s eye to be more precise, sitting dead center in the middle of the photorealistic interface. And while we’re here, why not start our interface tour with the dragon’s eye?

Apart from slightly creepily watching you, Evolution’s dragon eye in fact has a purpose and turns out to be a rotary, master multi-effects control. By turning the round handle that’s sitting on the outer ring clock-wise, the library’s engine slowly blends in a combination of effects which influences all the sounds in a patch. Taking a look under the hood reveals that turning the control up introduces some saturation, an overdrive effect as well as a high frequency boost.

I guess, this universal ‘destructor’ processor’s concept is borrowed from Heavyocity‘s ‘Punish’ control which they introduced a couple of years ago and converted into its own plugin just recently. The combination of effects roughens the sound and provides them with a certain edge, up to a point where it gets really nasty (in a positive meaning) in the upper limits of the control. The dragon eye is a nice way to shape a given sound further and push it forward in the mix. 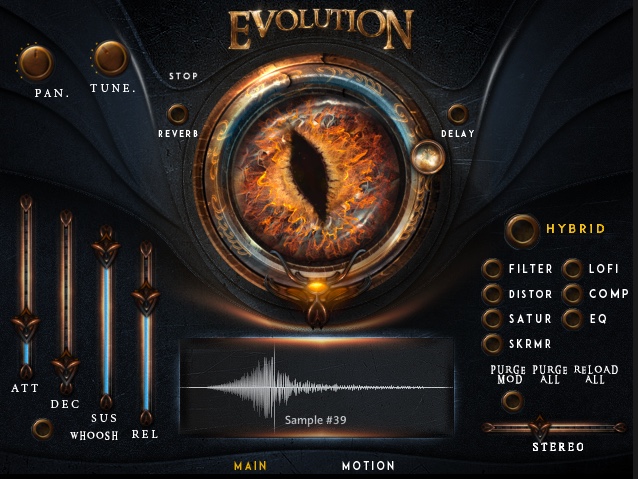 On the left side of the interface, you find a global tuning and panning knob at the top as well as a full ADSR control in the lower area, to shape the envelope of your sound according to your needs. An important control that I found a bit too easy to overlook is the ‘Whoosh’ switch below the envelope sliders, appearing on the two ‘Whoosh Hit’ patches. It switches on or off the whoosh portion (the sweeping lead-in part before an impact) of a sound. This allows you to control whether you want to have your impact sounds with a pre-whoosh leading into it or if you want them to be smack on the beat, directly starting with the impact itself.

Instead of the Whoosh control, the Risers patch has a ‘Long’ control, letting you switch between a normal or a longer version of any riser.

Just to the left and right of the dragon’s eye there are two switches for turning an internal reverb and delay module on or off.

On the lower right side, you can find a variety of effects controls, which can either be switched on momentarily by pressing and holding an according keyswitch (E6 – C7) or permanently, by clicking on a desired effect with your mouse. The largest FX switch labeled ‘Hybrid’, activates a combination of processors similar to the dragon’s eye control. As far as I could tell, Hybrid engages a saturation effect, another overdrive module and introduces a low frequency boost at around 80Hz. All of which are processing methods to make a sound more powerful and gritty.

Especially when combined with the dragon eye, you can achieve awesomely brutal and destructed sounds.

The last to control elements of the main interface are purge switches used to empty your RAM from unused samples and keeping only the ones you’ve used in a project. Next goes a stereo imaging slider. As expected, it turns stereo signals to mono when turned to the left side and widens up a sound’s stereo image when turned to the right. Be careful with extreme wide settings since they not only mess up your mono compatibility but also can introduce phase issues.

A vital feature of Evolution: Dragon is, that you are able to adjust every tonal element to your track’s root note(s) using the according keyswitches C0 – B0. While the pitching also works with all the non-tonal elements, it has a lot more effect on the pulses and loops portion of the library.

Coming from the SFX part of Evolution: Dragon we’re now going to take a look at its rhythmic elements.

There are two different types of rhythmic engines included with the library, Standart and Beat Machine. Both use Evoultion’s own host-tempo-sync’d step sequencer that offers a great deal of customization options, effects and even two LFOs to auto-modulate a loop’s tempo and panning. According to the developers, ‘Standart’ offers loops with smaller attack & release portions, thus shorter, punchier sounds as well as the ability to change the whole structure of rhythmic samples to get a correct location of weak and strong beats. On the other side, ‘Beat Machine’ does a better job of transforming loops into different pitches and tunings and has a lower CPU footprint.

The library’s developers did a nice little demonstration of the rhythmic section of Evolution: Dragon:

Evolution comes with a neat collection of preset synth patches that are housed in the same engine/interface as the SFX patches. To be precise, while the sounds of the synth section do derive from various synthesizers, they’re not generated in Kontakt itself. Instead, Keepforest took samples from the synth patches they created and spread them across the keyrange – very much like a ROMpler. Therefore, each synth patch in Evolution: Dragon consists of only one single snapshot sample that’s pitched up or down according to the keys you play. Opposed to working with a real synth, this means that the quality of a patch’s sound changes quite drastically when you reach the low or high keyrange limits.

Although this technique of taking synth snapshots and programming them into a sampler is quite common with SFX sample libraries nowadays, I’d love to see someone taking a wider key range of samples from each synth sound, so the pitch shifting sounds more natural. Nonetheless, in a reasonable range, most synth patches perform very well and have an appealing sound.

Evolution’s synth patches are sorted into different folders like Basses, Leads or Pads and based on the tiny sample size load up almost instantly. This makes it a breeze to flick through the many sounds.

A real plus is that through the library’s elaborate interface, you’re able to further shape and customize a synth patch to your liking and even create rhythms out of it using the ‘Motion’ tab.

THE SOUND OF EVOLUTION: DRAGON

Playing through the FX, rhythms and synth patches left me with the impression that the overall sound of the library is very powerful, pristine and in-your-face. Most patches sound modern and well produced and could easily compete with sound effects heard in current Hollywood blockbuster campaigns.

Especially with the SFX section of the library, it feels like you’ve already heard those sounds a hundred times in the cinema before.

The SFX section’s samples sound well recorded and processed. Rather than going for absolute uniqueness, they feel like they’re designed more with a bread-and-butter approach, though. Being a composer myself working in the trailer music branch and having to deal with music supervisors a lot, I learned that especially with trailer sound design, uniqueness is key. This is why I – and a lot of my composer colleagues – always strive for finding and creating new, recognizable FX. 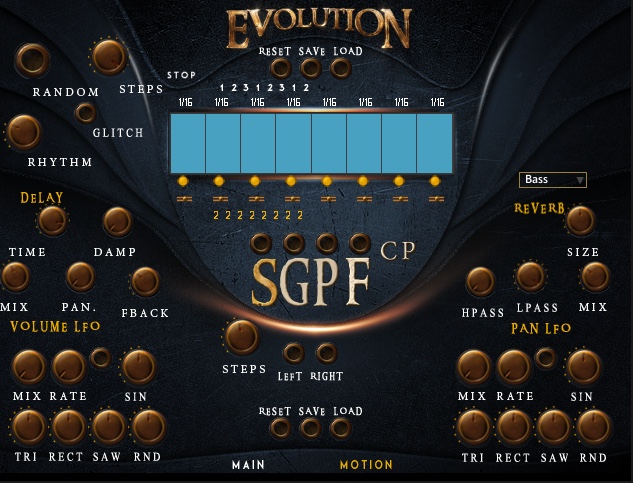 Now, when I said they feel like I already heard them before, it means that these types of sounds get used in trailers a lot and therefore are frequently found in successfully placed trailer music. The sounds included in Evolution: Dragon will easily blend into any of your cues and while not always necessarily being the most flamboyant ones, will provide you with a solid and impactful foundation of state of the art trailer sound design.

For my part, I really like the dragon’s eye ‘destruction’ knob, but feel like it could even mess some more with the sound, at least at higher settings. Sometimes, you just want to smash a sound to pieces and the eye could be the perfect place to achieve this with.

While the concept isn’t entirely new, Evolution: Dragon provides you with an essential toolbox of state-of-the-art trailer sound design material. The samples included are well recorded, thoughtfully produced and for the most part sound very upfront, punchy and Hollywood-like.

As mentioned earlier, some patches could use a bit more unique or unusual sounds, but nonetheless, they work perfectly fine as solid cue starters and will probably just suit your track well in 90% of the time.

If you really want to get the most out of the library and create unique results, make good use of the feature-rich, but still easy-to-use interface. In the end, if Keepforest didn’t want you to get creative yourself, they wouldn’t have given you so many customization options.

All in all, Evolution: Dragon feels like an inspiring new set of samples that not only trailer music composers will love to get their hands on but also people working in the video game and film music scene. With a release price of $119.00 (regular price $149.00), Keepforest‘s first sample library settles in right between competing products like Hybrid Two’s Project Alpha & Project Bravo ($99.00 each) and Heavyocity‘s Gravity ($449.00) while delivering a comparable amount of content.