In September 2015 Spitfire Audio announced, that Albion “legacy”, their award winning orchestral/cinematic/percussion sample library, released in 2011, will go out of duty and will no longer be for sale. The public was quite surprised by Spitfire’s decision, since no other major sample developer has ever done something like this. Soon after the previous announcement Spitfire announced the release of Albion One, Albion’s successor.

In the 4 years time of the release of Albion “legacy”, Spitfire has truly grown and is now one of the leading sample developers of orchestral and cinematic sample libraries aimed at professional composers of Film, Tv and video games. On their website they Spitfire states: “They (Spitfire) felt the experience gained, and the feedback garnered from thousands of users could present a product far superior to the original ‘legacy’ version, a product that would continue and deserve to be the most popular product Spitfire has ever sold. Quite simply Spitfire wanted to make Albion better, bigger, fatter, brighter, tighter with more articulations, more sounds, more loops with more control, more features and functions.”

So Spitfire went back to Air Lyndhurst Studios and recorded a 109 piece orchestra for the orchestral part of Albion One and recorded percussion loops with Paul Clarvis at Air Edel studios for the “Brunel loops” section.

Spitfire also states, that Albion One is everything you need to make epic modern music in one box. So lets see if Spitfire really managed to outdo themselves!

You have to think of Albion One (AO from her on forward) as 4 products in one. Albion: Albion Orchestra, Darwin Percussion Ensemble,Stephensons Steam Band & Brunel Loops.

AO is composed out of 49884 samples and requires 53,3GB of disk space (106,6GB during installation) and works in Kontakt 5 or Kontakt 5 free player. Lets take a look at the individual categories:

This large orchestra was recorded via priceless ribbon and valve mics viaNeve Monserrat pre-amps, the largest 88R Neve console in the world and onto pristine 2” tape before being converted with the top-of-their-class Prism AD converters at 96k. Before I even delve deeper, I can say, that all in all, the quality of the recordings is truly phenomenal. Albion orchestra offers 4 different microphone positions (Close, tree, ambient, outrigger).

AO’s orchestra comes with already orchestrated sections of strings, woodwinds and brass. In the main folder you will find patches, in which you trigger different articulations via key switches (brass high, brass mid, brass low, strings, woodwinds high & woodwinds low). You also have a sub folder with high and low string runs and another folder with various legato patches. For the users, that do not like keyswitches, Spitfire also added a folder where you can find all the articulations as separate patches. The extensive list of articulations can be found here.

With Albion orchestra you will be able to produce a very realistic sounding full orchestral composition, since Spitfire masterfully recorded all your typical and less typical playing techniques. Out of the box, it just sounds great. The lush AirStudios acoustics embedded into the recordings give Albion orchestra a very characteristic “AirStudios” sound, that you will for sure enjoy. For the people, that enjoy a wetter sounding orchestra, Spitfire added a “Lush reverb” slider. I usually do not like the “preset” reverbs sample developers add to their libraries, but this reverb really works great with Albion orchestra since it is very bright and airy.

Making a sketch with Albion Orchestra is a real breeze, since you are working with orchestral sections (strings, woodwinds, brass) instead of individual instruments inside the orchestra. The sustain patches generally work great for creating chordal accompaniment, the shorter articulations (stac., spic., pizz, ect.) are nice and tight, but most of all, the legato patches are astounding. My favorites are especially the octave legato patches. One of the golden rules of orchestration is to have your melody played in octaves or even double/tripple octaves by different groups in the orchestra; so recorded legato octaves are always great to have in you sample library collection. When an orchestra plays octaves in a concert hall, the hall resonates in a special way, that produces additional lovely harmonics. You will never be able to achieve the same sound using separate first violins and second violins samples playing octaves in your DAW.

For orchestration geeks like me, the down side of having to work with only orchestral sections instead of individual sections and/or individual instrument is, that you will not have a full control over your orchestrations. But in the realm of DAW composing, no one cares if you are using 24 horns and 16 trumpets simultaneously. If it sounds good, its good! The next time I will have to produce a quick mockup in a few hours, I will just open my Albion One Orchestra template, that I have created, and I will be done in no time.

For owners of other Spitfire orchestral sample libraries, that have also been recorded in Air Studios, Albion orchestra is a great addition to have, since it blend seamlessly with these Spitfire products. I have also tested how Albion orchestra blends with sample libraries of other sample developers and found out, that it blends with practically anything you throw at it. For example beefing up the “strings high octave patch” with a layer of an additional first violins samples. Albion One also comes with all the legacy patches. Try layering the new Albion orchestra, with the old one! You can get some great results this way.

An extra thing to note is, that most articulations have been recorded in several dynamic levels, that are triggered via cc1 or velocity (depending on the patch). Some patches also have a vibrato control option.

All in all I am highly impressed by the Albion Orchestra in AO. I am an owner of the Albion “legacy” and I have to say, Spitfire really improved the orchestra in this version.

I have always been struggling with my percussion writing, but as soon as I loaded up Darwin percussions I was immediatelly inspired and instantly fell in love.

As Albion orchestra, Darwin percussions have been recorded in the Air Studios hall with the same microphone setup and an additional close microphone. The sound is very natural and the instruments available can produce a big array of timbres. From soft rhythms too massive hits. I do not know the details about how many round-robins and dynamic levels are available, but my impression is, that there are many of both. Even creating rolls and flam effects is a breez with Darwin percussions.

“Brunel loops is a big selections of raw and warped loops from original recordings featuring percussionist Paul Clarvis playing a collection of unrecognisable relics. These are designed to be sculpted into your tracks with the unique crossfadable dynamic functionality with up to three dynamic layers per instrument and many of the loops designed for 8th, 16th and 12th style meters. All of these loops lock to your host tempo and can naturally follow even the most “rubato” of passages.” 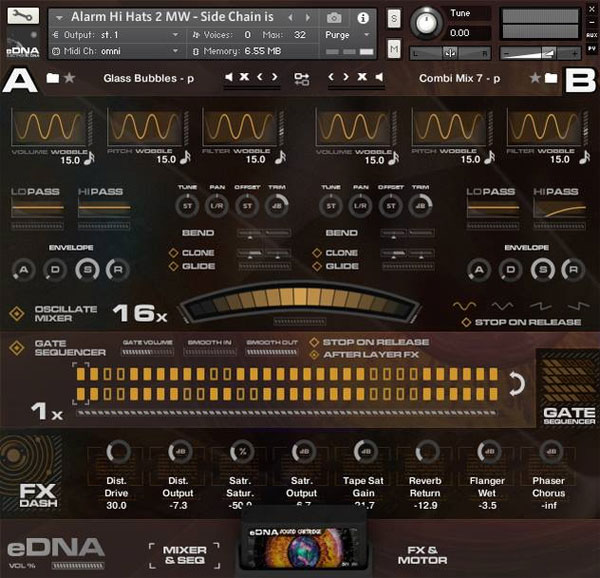 Brunel loops are aimed at giving drive and speed to your compositions. The large selection of loops will keep you occupied for hours and you are for sure to find a loop, that will fit your composition. The sound of the raw recordings is quite dry, so it gives the user a lot of freedom with tinkering of the sounds.

Brunel loops also work inside the new Spitfire eDNA engine inside Kontakt, that gives the user a lot of freedom with tweaking the sounds without leaving the realm of Kontakt. The amount of possibilities are almost endless.

For Stephensons steam band, Spitfire producers took the raw orchestral recordings they made for Albion One and morphed them into various pads, drones, effects and other sounds. Again, the amount of content is huge and the eDNA engine gives you the possibility to combine sounds and tweak them even further. Since the sounds are made out of the raw orchestral samples, they blend perfectly with Albion orchestra. Stephensons steam band are great for creating tension, atmospheres or even rhythmic synths. One does need some time to get used to the eDNA engine, but once you get the hang of it, you will be able to create some very unique sounds.

The GUI for Albion orchestra is the same as for most of the more recent Spitfire releases. The GUI is very intuitive and consists of the main window and settings windows. On the main window you can select your desired articulation, adjust the dynamics, expression, vibrato and reverb. You also have a quick room-close mic mixer, that can be useful, but must be used with caution, since the slightest movement of the fader alters the sound quite drastically. Luckily you are able to adjust all the mic positions in the settings tab. The abundance of mic positions makes it very easy to get your desired sound. Also in the settings tab you will be able to adjust the tightness of the samples, round-robin control, purge samples and various other settings.

Darwin percussions feature their very own sleek one screen GUI where you can alter your mic positions, select or deselect your loaded samples, purge samples and control the dynamics and expression. There is nothing really fancy going on, but it does the job done.

Stephensons steam band and Brunel loops work with the eDNA engine, that has its own GUI, that offers various possibilities. 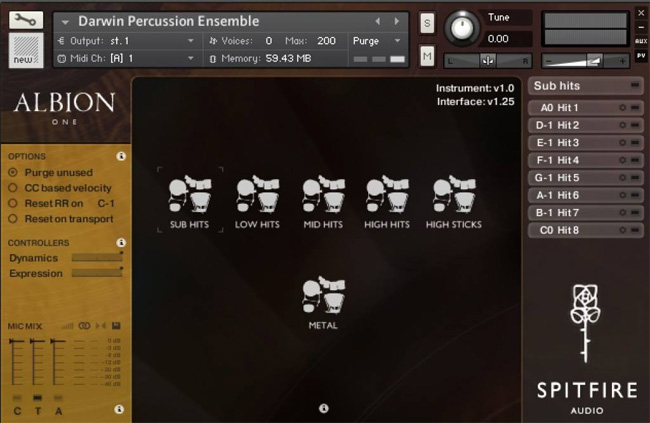 The price of the instrument is 319£ (448EUR, 482$) without added tax. This is in my opinion very cheep for the amount of content you are getting with this library. You are basically getting four different products for the price of one. For students and teachers Spitfire is also offering a 30% discount. So weather you are a professional or a newcomer, Albion One is worth every penny of the price.

There are not many sample libaries out there, which offer so many possibilities in one box. In the beginning I asked a question, whether Spitfire outdid themselves with this library and the answer is: “Yes, they have!”. I can imagine someone only having Albion One as their sole sample library and being able to score a major feature film with no problem. The sound is great, its intuitive and with it you will be able produce convincing orchestral/hybrid tracks very quickly plus, the price is affordable so anyone can buy it. Albion One is in my opinion a must have for anyone in the business.