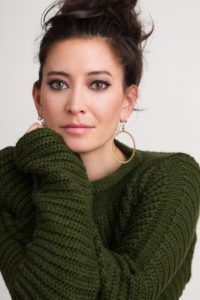 Blindspot (NBC), Riverdale (CW), The Other Side of Home (Documentary, shortlisted for the 2017 Oscars), Piss Off, I Love You (TV Series) Best Wishes From Millwood (Winner of the Audience Award for Narrative Short at Austin Film Festival), Courting Chaos (Feature with 4 awards including Best Comedy Film at Hollywood Reel Independent Film Festival)

Hi Sherri, thank you for taking time and doing this interview. Let’s start by introducing yourself and telling us a little bit about your background in music?

Thank you for having me! I was always involved with music in some way. I studied classical piano from age 5, and grew up playing in various music groups and bands. I was singing a lot in various youth and church groups, and played the trumpet (poorly) in jazz band. Far more proficient on piano, I accompanied the choirs and theater performances of my middle and high schools.

Songwriting and singing was really the start of my composing career. I’d perform at recitals or for whomever would listen. Somewhere in there I heard an amazing score by Michael Kamen for the movie Robin Hood: Prince of Thieves, and was totally mesmerized by the magic of music to picture. From then on I knew I wanted to do that for a living. I got a Bachelor of Music in Composition and Theory, and after a number of years of teaching private piano lessons, I moved to Los Angeles to attend USC’s graduate course in Film Scoring.

How did you get involved with the Riverdale TV series?

I guess like most things, it was good timing! I was already collaborating with Blake Neely on several of his shows. And when the Riverdale pilot came in, I totally fell in love with it and was excited to work with Blake on helping him develop this new sound. We had such success in our partnership during the first season, that moving forward it became the natural next step to share a
screen credit.

Can we get a little bit of the insight of your creative process on Riverdale TV series?

The score of Riverdale performs a specific function that’s different from some of the other shows I’ve worked on. Rather than driving story, keeping pace, or hitting a lot of action (although that’s needed at times), the music is really meant to lay a sonic groundwork for the drama to play out. There’s a lot of subtlety in the scenes, so when I’m writing, I’m often looking for that moment of nuance – an actor’s look, a pause, a line that hints or speaks to the bigger arc of the plot. And I try and make a small comment or nod to that moment. Its a fun challenge to not overplay them. And equally fun are the scenes where the action is far more prominent, and I can really dig into the palette to develop a cool new sound element, get a little more crunchy with harmonies or more overt with melodies.

How did you keep your score fresh for the series?

The storylines and character arcs are really rich in development and evolution, so I feel like the music has a good roadmap for its own journey and growth, too. On an episodic format like this, its true that consistency is important – like using a character’s established theme/sound or returning to the musical moments that match a corresponding storyline. So while I do need to employ some of the same musical elements at times, I like developing additional layers of sound to keep things new and interesting. And as the episode progresses and the plot thickens, as it were, the music gets to evolve, too, with new sounds and added musical elements. I also like to play with the timing of the beat or meter of the music. Perhaps play the melody slower or twice as fast, maybe add another counter melody or change the rhythm. Its definitely the fun part of music composition for sure!

What do you think is the most challenging part of scoring Riverdale?

I think one of the more challenging parts of scoring this show is also the same for most episodic format… the deadlines! The schedule is pretty tight and immovable. But its also a fun challenge and can actually work in favor of the end result, because it forces me to trust my instincts both dramatically and musically. There isn’t too much time for second-guessing, which doesn’t mean you just slap your first thought on the page. It means you really have to work for every choice you make because it has to count. More specific to Riverdale, another challenge, which again is kind of the excitement of it, is making sure not to overstate some already overtly presented ideas. For instance, when Cheryl’s character appears on screen, her entrances and lines are never subtle. Musically you want to match that, but without competing with the character. So it ends up being really important to choose carefully and economically the most impactful musical statement that says just the right thing, but doesn’t over-do it. Ends up being a good challenge creatively.

You worked on many CW TV series, providing additional music for Flash, Supergirl, Legends of Tomorrow and others. How did you get involved with those series and what were your main responsibilities?

So, when I was a graduate student at USC, I met Blake Neely, who was teaching there at the time. His class was a really impactful learning experience and I always tried to stay on his radar as a mentee. When I was a fellow at the Sundance Composer Lab, Blake was an advisor…which provided a great opportunity for me to further learn his style as well as for him to learn a bit more about my own style of writing. Over the years we stayed in touch and even pitched for some jobs together. What really solidified our professional involvement, was when I became a vocalist on a couple of his shows, as we were both able to get a good sense of how we could collaborate together. That ended up being particularly pivotal for me when Blake got the call do the Supergirl pilot, and I in turn got the call from Blake to come in with my own writing sound and help him develop part of the Supergirl sound. Simultaneously, Blake started another pilot called Blindspot, which I also helped him develop part of the sound for. With both shows in full swing and Blake’s business expanding, I came on board as a full-time additional writer and collaborator. When Blake took on DC’s Legends of Tomorrow, I was eager to contribute to that show’s sound as well. That lead to jumping onto The Flash and Arrow when CW decided to do the cross-overs for those shows. Its been a huge awesome journey getting in on the ground level for some of these series and contributing to their sounds as much as I’ve been able to.

As a composer for this type of music and in this facet of the industry, there are definitely some standards that I think most film composers use – ProTools, Logic, Ableton, Finale, which are the main ones I use. You have to use the software and hardware that are going to meet the demands of the high production standards in the fast-paced schedule that is film and tv. Because most of these shows are being produced almost entirely from the computer and need to be ready-to-air, every tool used needs to be of and function at the highest level. And while the samples, effects and mastering plugins used are really available to anyone, they are all customized to match the sound of each show’s individual character, as well as the production quality that ultimately makes it possible to send this stuff directly to air.

What has been your favorite project to work on so far and why?

I feel like because each project is so different, creatively exciting, and all-consuming, I think my favorite one is usually the one I’m currently working on. But since that’s a slightly boring truth (haha), I can say that one of my favorites of late is a documentary called The Other Side of Home, directed by Naré Mkrtchyan. Its follows a Turkish women who discovers she is partly of Armenian decent, and travels to Armenia to take part in the march commemorating the 100th anniversary of the Armenian Genocide. It was important to me because its a story for all humanity and deals with a very deeply controversial human conflict. I felt like there was a responsibility as one of the makers of this film to help tell the right story, and in the right way. To help tell a story that relates to all audiences, not just Armenians. In doing that I specifically made it a non-Armenian score, although there were some elements included. The film did quite well, having many screenings around the world, as well as being shortlisted for the 2017 Oscars. I’m always eager to work on projects that tell such human stories and can bring light to important ideas and concepts. It becomes so much bigger than the music I write or even the film as a whole.

Yes, just do it! If you can go to school for it, even better. If that’s not your thing, consider applying and participating in as many classes or workshops as you can. Educating yourself about music composition is really important – its the foundation of what we do. People think that you need to know computers and music programming. That’s absolutely true. But being able to construct music is every bit as important as being able to construct a sentence. Its your sword, your most effective tool, your favorite toy. Be humble – the industry goes deep and even when you know a bunch of stuff, there’s still so much more to learn. Be patient – this industry is a slow build. And rightly so – there’s a lot of skill in making a movie or a tv show and it takes time to learn all that. And my favorite, as it was said to me by someone else: If you can imagine yourself being happy doing anything else, then go do that. Just a positive reminder that we should love what we do!

Currently I’m on a break from the shows, so I’m taking the time to write and record some songs – which I find inspiring because somehow writing away from picture feeds into my creativity when I return to picture. When I do return, I’ll also be starting work on another documentary this summer. Fun things ahead!

Sherri, thank you so much for taking the time and answering my questions! I wish you
all the best for your future projects.

Thank you so much for your time and interest!

In this interview, we talk to composer Brandon Roberts about his work on Unbroken: Path to Redemption - An unbelievable true story of Olympian and World War II hero Louis Zamperini. END_OF_DOCUMENT_TOKEN_TO_BE_REPLACED

In this interview, we talk to composer Kurt Oldman about his work on a SuperMansion series and also touch on his past work. END_OF_DOCUMENT_TOKEN_TO_BE_REPLACED

In this interview, we talk to Gaayatri Kaundinya about her work as a composer and singer on The Hundred Foot Journey, Jungle Book and Million Dollar Arm. END_OF_DOCUMENT_TOKEN_TO_BE_REPLACED