Today we will be checking out the new Arturia midi controler called Keylab 61, producer pack edition. This is a new controller line from Arturia featuring a nice bundle of software. Let’s have a peek.

Once you unpack the Keylab controller you are immediately mesmerized with its beauty and you can imagine yourself already playing it. You can’t wait, and the brownish wooden side panels, 9 faders and 10 knobs don’t make it any easier for you. The 16 pads are awaiting you eagerly, ready to take the brunt of your inspiration. And then you take it out the box and nearly drop it…

That would pretty much sum up my initial thoughts of my first encounter with Arturia’s Keylab 61. I really liked the way it looked and the way Arturia presented it in a box. Then I picked it up and boy was I in for a surprise. The Keylab 61 is pretty heavy! Although it doesn’t look it at all and this is not really a complaint (well if you need it for live shows then yeah it might be), I was quite surprised by its weight. 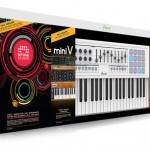 The first thing that sort of took away my excitement were the keys. They feel very light. So light in fact that I thought they were about to snap. Luckily that didn’t happen. They are suppose to be semi – weighted but surely don’t feel like that. So if you are looking for that pro feel you won’t find it here. Keys are also velocity sensitive and feature an after touch which is a nice feature to have, especially for playing with AnalogLab or synths of your desire.

On the far left side you will the transpose control and below that you have pitchbend and modwheel. Both “wheels” work fine and I didn’t get the same feeling as I did with the keys. The only issue one might find is that both modwheel and pitchbend are relatively close together so if you have big hands you can find yourself moving both at a time.

Next we find a small screen where all information about the CC is displayed which comes handy. Since Keylab is a hybrid product (works well with dedicated software “AnalogLab”) it also displays the current patch you are using inside AnalogLab which is a nice feature. There are also three knobs (Volume, Category, Preset) and three clickable buttons (Sound, Multi and Edit). 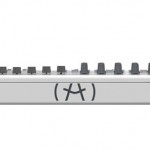 Most buttons and knobs are pre-labeled which leaves very little room if you want to put your own labels. Might sound like a nitpick here but I will try to explain myself. Keylab is a hybrid product and will work perfectly with its dedicated software (AnalogLab or probably other Arturia products) so naturally they would add labels that are relative to their software but for me personally that is a bit annoying since I won’t be using Keylab with Arturia products only. Therefore, the labels sort of loose their meaning especially if you don’t map the controller to the exact same effect in your DAW. Maybe that’s exactly how Arturia wanted it – to make it easy to map, to guide you. Having said all that, this issue above is really just a personal taste and it’s not really a deal breaker here. 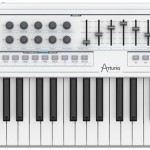 The knobs on the other hand feel a bit on the cheap side compared to the overall keyboard. The whole keyboard is mostly metallic with its signature wooden side panels while the knobs and faders are made out of plastic and that is a shame. The 10 knobs are rotatable 360 degrees which is cool and they don’t click once rotated which is also something I like, however the three knobs near the display are a bit clicky. My guess is because they are meant to be used for browsing the patches and multies in AnalogLab.

Faders are ok but again they feel a bit cheap. One actually came off right away which didn’t really make a great starting impression but it is nothing compared to the buttons. The buttons are way too loud. The 16 velocity sensitive pads are cool and if I have to compare them I would say they are similar to the Korg PadKontrol. In the back of the Keylab you will find your standard Midi ins and outs, pedal, expression and breath inputs.

I have mixed feelings about Keylab 61. On one hand it looks fantastic while on the other hand there are so many things that are trying to convince me otherwise.

Which one to get? Since there is no real difference between those two (besides one octave) I would say get the 49 version as it has a better layout in my opinion. The 61 version is a bit redundant in that regard. The pitch and modwheel are the perfect examples. In the 61 version both are to the left and up while 41 version both are only to the left where they feel the slot of that missing octave and that, in my opinion is how they should be layed out in 61 version as well, as this sort of feels more natural. They could have easily extended it a bit more and move all controllers and faders to the left and there would be still a bit of a room for a mouse or a notepad left in my opinion.

The Keylab 61 will set you back for around 500 EUROS which compared to the other midi controllers and what they offer is relatively cheap. Of course you have the option to buy either a 49 version (399 EUROS) or 25 version (349 EUROS). The whole bundle includes full version of BitWig, AnalogLab and MiniV which is great for anyone starting out and has limited resources.

If you are a pro and looking for a new keyboard I would suggest that you stop by your nearest music shop and check out the controller before buying it.

A word about the bundled software

The bundled software is a great addition to Keylab series and it really makes you want to invest in it. BitWig is a relatively new DAW and according to others it is a great piece of software. I haven’t tested it for this review as I am used to Reaper, my primary music software of choice. AnalogLab and MiniV are also extremely useful tools. AnalogLab showcase the Arturia products and really shines in that regard. Works perfectly with Keylab. The MiniV is my favorite. It is the digital version of an old Moog synth. The sound of it is really warm and rich but I have to say that MiniV is very much CPU intensive so those with relatively older computers might find a hard time using two or more instances of MiniV.

The Keylab 61 is a fantastic looking midi keyboard but it does have its share of flaws which cannot be overlooked. The price is good and the software bundle makes it even more desirable.

Each of the three Keylab keyboards have the same bundle and the pricing is set to lure you into buying a 49 version. That would be my suggestion also. I would rather buy a Keylab 49 than the 61 version as it has, in my opinion, a better layout and exactly the same software bundle.

Don`t forget to rate the product yourself if you bought it in the “Reader rating” tab below!
Alternatives
Here are some alternatives
Komplete Kontrol S49 & S61
Korg Taktile
M-Audio Oxygen 49
M-Audio Axiom 49 & 61
E-MU Long board 61
Arturia Keylab 61 (Producer pack) review
The Keylab 61 is a fantastic looking midi keyboard but it does have its share of flaws which cannot be overlooked. The price is good and the software bundle makes it even more desirable.
Pros
Cons
2014-12-19
3.9Good
Reader Rating: (7 Votes)