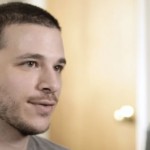 Tell us a little about yourself and how you started composing music?

After taking piano lessons for a few years as a kid, I just started messing around on the piano. I knew nothing about composition, but I would occasionally stumble upon something that sounded good to me. Of course, what I thought was good at that time was in actuality quite awful, but fortunately I was blissfully unaware of that fact. Eventually the more I did it, the better I got at it.

Your song Mind Heist sort of started the revolution in trailer music industry. Can you share with our readers on how that song came to be and a little bit about the process of creating it?

Mind Heist was no different than any other song, in terms of creation. The process is always the same for me, in that I’m trying to figure out how to express or convey something that is intangible…how to translate a feeling into music and/or words. Sometimes this process goes quickly, and sometimes it goes agonizingly slow.

When I made Mind Heist, the concept I had in mind was that of a seed or idea growing and evolving into something massive that had a life of it’s own. So the opening two-note motif expands to three notes, then four notes, the orchestration blossoms and carries the motif in changing melodic and harmonic contexts, etc, until eventually everything comes together in a final grand unified moment.

You have released three albums so far. Are there any new albums coming out that you can talk about?

In addition to 3 full length albums, I’ve also released a variety of independent singles / EPs. Hopefully RONIN, which was released in 2013, will not be the last of me…but I have no way of knowing what I’m going to do until I’m actually doing it. I do expect to start work on another full length album in the near future, so we’ll see what happens. Music is not an intellectual choice for me, but more of a compulsion that ebbs and flows.

Tell us more about Nine Leaves?

I had met a group of lyricists back in high school when I was 16 – they were writing together under the name Nine Leaves, but there was no actual music component within the group. We experimented with taking the instrumental music I was making on my own, and combining it with hip-hop (a genre which at that time was completely foreign to me). We all hit it off, and that became the main focus of my musical efforts moving forward, for about 10 years. This is how I fell in love with making records, and came to truly appreciate the power of a song and the written word, and this is what eventually led to becoming a lyricist myself.

We officially released 2 full length albums under the Nine Leaves banner, but had another 2 or 3 albums worth of material from before that which no one ever heard. Maybe one day we’ll open the archives, haha. Ultimately, life took us all in different directions, and I ended up pursuing a career as a solo artist.

The only equipment used regularly are my Genelec monitors and Logic software. Everything else, from plug-ins to microphones to sound libraries, changes from one project to the next. In truth, it’s not the equipment that is important, but what you do with that equipment that matters. No piece of gear will write / compose / mix for you.

What inspires you to make music?

I have no idea. Honestly. Inspiration is very difficult to pin down, and it rarely stems from just one thing. I would say inspiring things inspire me. :)

I think I’m most creative when I haven’t been creative for some extended period of time. I tend to take a hiatus in between each project, during which I don’t make any music. The time away helps to reset things for me.

You composed a lot of music for commercials. Do you still do a lot of composing for TV, film or game?

Actually, I don’t do any original composition in those mediums, and never really did. I have scored a short film once or twice in my lifetime, such as The Candidate, and that was an interesting and rewarding experience…and I did score a handful of commercials after graduating college so that I wouldn’t starve to death…but original score is a very different animal compared to records. Neither is better or worse, just different. My relationship to the Film/ TV industry is with respect to the licensing of songs I’ve made as an artist, as opposed to custom score as a composer.

The only secret is that there is no secret. There is no formula to making compelling music, or compelling art of any kind.

What is your favourite piece that you have composed?

The one that’s just around the corner. I’m always most excited by whatever it is I’m currently working on. I try to never listen to any of my past work once it’s completed and released, partly because I don’t want to be influenced by it, and partly because it’s difficult for me to listen to my own work without analyzing and being critical of it.

There’s no right or wrong way to make music. So make the music that is authentic to you.

In this interview, we talk to composer Brandon Roberts about his work on Unbroken: Path to Redemption - An unbelievable true story of Olympian and World War II hero Louis Zamperini. END_OF_DOCUMENT_TOKEN_TO_BE_REPLACED

In this interview, we talk to composer Kurt Oldman about his work on a SuperMansion series and also touch on his past work. END_OF_DOCUMENT_TOKEN_TO_BE_REPLACED

In this interview, we talk to Gaayatri Kaundinya about her work as a composer and singer on The Hundred Foot Journey, Jungle Book and Million Dollar Arm. END_OF_DOCUMENT_TOKEN_TO_BE_REPLACED