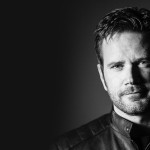 Hi Christopher, thank you for taking time to do this interview. Let us start with the basic questions first. Tell us a little bit about yourself and how did you get your start as a composer?

I moved to Los Angeles from Arizona chasing the dream of being a film composer in 2001. I was fortunate to be in the right place and the right time to have met Guillermo del Toro who had just listened to some of my music. Guillermo really championed me to various studios, and gave me my break in the biz as the composer of the HELLBOY Animated films, and video game.

You scored a lot of superhero animated series. How did you get involved in those projects?

My work with Guillermo on the HELLBOY animated films put me on the radar of Bruce Timm, who is a superhero animation legend. Bruce was responsible for the classic BATMAN ANIMATED series in the 90’s. At the time Warner Bros Animation was experimenting with doing some feature length adaptations of DC comics graphic novels, which Bruce was producing. I am a total comic book fanboy and it was a surreal, geek out moment when I got the call from a Warner Bros music executive, telling me that Bruce Timm was a fan of my music and wanted to meet me!

Dark Knight Returns (part 1 and part 2) and Batman Year One are still one my favorite Batman animated series since they are very close to the original comic book. How did you prepare for these cartoons and have you read the comics beforehand?

I read those comics when they first came out and I was in junior high school! I know both of those stories by heart, and consider them to be not just classics and game changers in the comic book medium.. but also legit, bonafide classics of literature and art!

As far as preparation went.. I still have to keep myself in check as a composer first.. even though I know these stories by heart.. It’s not “MY” movie. I have to respect the directors concept in terms of what the stylistic and dramatic needs are of the music in context of how they want to tell the story.

The main thing I brought to the table in terms of music style was to commit to the 1986 period setting of THE DARK KNIGHT RETURNS. My artistic musical interpretation of the score was that, the analog synth represented this new corrupt 1980’s era that an aged classical hero Batman from a different era now existed in. As the film progressed, the sterile analog synth score slowly transitions to a more fully organic “classical” orchestral score representing the return and restoration of the old hero.

Here is a fun question. If you could score “The Killing Joke” animated series, what instrument would you use to define Joker?

Ugh.. tough question! That story is very psychological. Alan Moore is brilliant.. The are a million ways to define the Joker.. he is anarchy/chaos theory personified.. no rules. Again it’s a relationship not with the source graphic novel, but what the needs of the movie are.. Could be a warped music box ? Could be noir jazz? Could be nightmare sound design-drones? A fucked-up cover of an old Tiny Tim, or Liberace song? All of the above?? WB IS doing an adaptation of The Killing Joke. I’m not involved with that, but I know who is doing the music.. It’s in good, trusted hands, and I can’t wait to see and hear how that turns out!

Let’s talk about your game audio scores for a bit. “Injustice: Gods Among Us” is considered one of the best DC fighting games. How did you get involved with the project and what obstacles (if there were any) did you encounter during the production of the game?

The crew at Netherrealm reached out to me based on my work with the DC animated films. That was a pretty straight forward working experience working with that team, as the needs of the music where pretty standard. The music I wrote for INJUSTICE mainly concerned the story scenes, which were scored traditionally. No different from how I would be working on a film.

BATMAN: ARKHAM ORIGINS in comparison was a far more elaborate project in terms of how the music needed to work with the mechanics of the game play and programming. That game also required over 180 minutes of music!

What is the difference in your creative process when creating music for film and TV versus games?

Generally it’s in terms of linear storytelling. In a movie you are musically supporting a story, or scene that has a natural linear arc. A beginning, middle and end.

A game is a non-linear experience, with multiple outcomes that are dependent on the skill of the player. In essence I’m writing music that needs to generally loop for as long as you are in a room in a game, and has multiple endings. Did you just die? Did you just beat the bad guy? Did you find a clue? The challenge is to write all of these variations of music that are triggered by the game based on your decisions, without you even noticing that the music seamlessly transitioned with you.

What was one most memorable moment for you while scoring games, animated series and movies?

I just did a movie directed by Kevin Smith called YOGA HOSERS, in which I have a non-speaking on screen cameo… later in the same scene Kevin Conroy, who is “THE” voice of Batman in the classic BATMAN ANIMATED SERIES also has a cameo, in which there is a “Batman” joke. So Kevin Smith asked me to homage my Batman scores for that scene… It was pretty surreal and meta to be not only scoring myself on screen, but also homaging my past work with the various BATMAN films I’ve done.

I write primarily in Ableton Live, and Digital Performer. I pretty much own every orchestral library available on the market.

All my tracks are then recorded into Pro Tools for my mixer Daniel Kresco to work with and create the final surround mix for the dub stage. With Ableton I can work incredibly fast, and it’s great for electronic and experimental scoring and sound design. Digital Performer is my go-to if I know I will have a live orchestra performing the score, as its MIDI transcription capabilities translates really well with my orchestrators.

I learned to start different cues, and bounce around from cue to cue as opposed to just saying… “today I’m just going to work on the big fight.” Because if I just focus on one cue for the day, I can lose sight of how it fits in the larger story, I’ll obsess over orchestration details, and start “chasing my tail,” so to speak.

By working on multiple cues, and bouncing back and forth between them during the day, I can have a bit of a pallet cleanser, and listen to what I’ve done on something earlier with fresh ears. Sometimes it’s really just good to “sleep on it” and listen to it fresh in the morning. (that is… if you have the luxury of sleep on a deadline!)

My first lesson was the importance of having a support team in place, as no matter how organized you think you are for a gig, it’s easy to be overwhelmed by various non-creative, technical situations.

On my first pro gig, I assumed that besides obviously writing the music, I would do everything else by myself… editing, mixing, creating the final surround Pro Tools master for the stage.

I quickly became overwhelmed from phone calls and emails addressing notes from the producers, and technical hiccups with my gear.

I have such a compressed time frame to be creative on a deadline, it’s hard to make objective mixing decisions, as you’ve listened and played every cue hundreds of times. I found myself doing to classic rookie mistake of “turning all the faders up!” because I couldn’t hear it anymore. I didn’t have enough time and energy to do what I was hired to do.. write music!

Fortunately I assembled an amazing team of professionals.. music editors, mixers, tech support to deal with any non creative technical challenges, and keep me focused on writing.

Any reader interested in a career as a composer is fortunate to be living in a time with the internet! There is a wealth of knowledge one Google click away. Read everything you can find out there including sites like this one.

You are also fortunate to be living in a time where music gear and software are relatively accessible and affordable for someone to buy and learn on. There are lots of resources and lessons out there for free online and on YouTube, as well as traditional paid college music programs. Remember there are NO RULES or “one” path to being a composer. Learn the fundamentals of the craft, and develop your own voice and technique.

In this interview, we talk to composer Brandon Roberts about his work on Unbroken: Path to Redemption - An unbelievable true story of Olympian and World War II hero Louis Zamperini. END_OF_DOCUMENT_TOKEN_TO_BE_REPLACED

In this interview, we talk to composer Kurt Oldman about his work on a SuperMansion series and also touch on his past work. END_OF_DOCUMENT_TOKEN_TO_BE_REPLACED

In this interview, we talk to Gaayatri Kaundinya about her work as a composer and singer on The Hundred Foot Journey, Jungle Book and Million Dollar Arm. END_OF_DOCUMENT_TOKEN_TO_BE_REPLACED