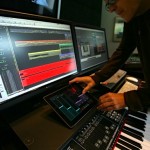 Tell us a little about yourself and what do you do for a living?

I write and perform music…mostly for film and television but also video games.

What were the briefs for Fallout, Fallout 2 and Fallout: New Vegas like? Care to share some insights of your process for these projects?

I was given specific guidance in both the Fallouts for the vibe and style. Basically the note was that the music needed to be ambient, cold, dark and desolate… The producers had very specific sounds ideas for certain areas in the game. I took that into consideration with each piece, then added my take on it with an ethnic and industrial vibe, so as to feel like a cohesive score..

In New Vegas they used existing music from Fallout 1-2.

Where did you draw inspiration from when you composed the music for the first Fallout game?

The main source of inspiration came from the subject matter itself and what the world would feel like post nuke..

What hardware and synthesizers did you use when you made the music for Fallout and Fallout 2?

At the time I was using a NED Synclavier as my workstation controlling a few midi synths and modules like a Nord 2, Virus, PPG 2.3, Jupiter 6 and a rackmount synth called a Morpheus by EMU. The Morpheus, like a lot of the rackmount modules in the ‘90s, had this little screen with tons of pages to figure out which made programming painful, but once I figured out the programming architecture it yielded some interesting clangy metal sounds and some strange ambiences, which became a big part of the palette and sound of Fallout.

You composed the music to the recently released video game Wasteland 2. It is the first official sequel to the 1988 video game Wasteland (Fountain of Dreams, Meantime and Fallout are considered to be spiritual successors). What was the production process for the project like? What was your approach for the mood and the feel of the game music wise?

When we first started talking about the music Brian Fargo’s original concept was to go for a minimal ambient, colder and more desolate feel than the original “Fallout”.

I felt the WL2 music had to be more aggressive and harsher from a sonic point of view to fit the dystopian world of WL2. The purpose of the music was to make you feel uneasy and at times a little disorientated. In comparison from a sonic standpoint the “Fallout” 1-2 music was quite tame and almost calming at times. The WL2 score has some of those elements but is more relentless, darker and distorted which is my interpretation of what that dystopian world could really feel like… I knew going in the Fallout fans would want something similar to those scores, but WL2 needed to be a different musical interpretation. There are two areas of the game being the Arizona Desert and L.A.: Arizona has this open, desolate, decayed feel with long metal ambiences, harmonically aggressive over distorted drones, which at times has a strange underlying melodic vibe. That, blended with the twang of a dobro, became the basis for Arizona.

L.A. was approached more from a glitchy electronic perspective. It’s also harsher than Arizona with more distorted tones blended with percussion and radio voices…Both Arizona and LA had many factions inside, so those were addressed by using subtle but specific signature sounds of each faction.

WL2 being a Kickstarter, the budget became an issue that unfortunately did effect the music. In a game like WL2 with all the exploration and battles there are hours and hours of gameplay. It became apparent to me early on with the sheer size of the game it was going to be impossible to fill that with music. It’s tough to get 14 pieces of ambient music to fill the hours and hours of gameplay. We did add a few tracks, especially in the battle scenarios, but unfortunately in my opinion not nearly enough to match the scope of gameplay.

Too be truthful I’m not sure when I’m the most creative. In television and in some cases video games, often I feel like anything but creative because of time constraints and deadlines. Even if you’re not aware of it, at any given time you have to be creative, or somehow hope you are… if that makes any sense.

Beside video games what projects have you been working on recently?

I’m working on a television show “Aquarius” with a composer friend of mine based on the Manson murders. We’ve finished 8 eps. of 13 which will air in the spring. After that I start programming work on the third season of “Under The Dome”.

I’m really hoping to do a personal project of some sort in the near future where I have the time to really experiment with sound and feel. I’m getting more involved with modular synths which as of late have inspired me to write music without the normal sonic constraints or a specific musical point of view, so I’m excited to see where that goes.

You have quite an impressive portfolio under your belt. What would you consider the most inspiring moment in your career?

I think because of the subject matter and the fact there was nothing else like it on primetime television, it would have to be my first dramatic television show “Prey”. I remember seeing the pilot ep. and thinking S**t I couldn’t have asked for a cooler show. It only lasted 13 episodes, but for me it was a true inspiration to work on…The premise being:

“What if global warming was changing our DNA and the human race was hiding an alternate race among its own, a more intelligent breed of serial killers. Their goal: to destroy human-kind in order to let the strong survive. Darwin’s theory might be very relevant”.

The producers wanted this this dark, tribal-influenced world music that could work as score. I wrote the Main Title music first without picture with that premise and music style in mind, and then they cut the visuals to that music. The visuals were quite disturbing and at the time in 1997 pushed the boundaries of television Main Titles, which was way fun to be a part of.

Even if you’re not really aware of it or be it specific, I think you learn from every project. Music is a never-ending quest or curse to find the right notes, sound, or tone that keeps you coming back. I feel that if you don’t learn that there is probably not a good reason to be doing it. Music can be very complex and be simple at the same time. If you’re able to find the simplicity in all the chaos, you’re learning something.

This is more a hint than motivational and it’s just my take on things.

If you want to do this sort of thing for a living think long and hard about your decision. To be honest, a large part of the business, especially TV, film, video games sometimes can make no sense at all, and the music can be a very small part of the overall story. Set goals, try not to stray because you will be asked to do things that are not really in your best interest that can hinder your options to progress. You do have to make a living and it’s great if you can do that with music, but not at the expense of your soul.

In this interview, we talk to composer Brandon Roberts about his work on Unbroken: Path to Redemption - An unbelievable true story of Olympian and World War II hero Louis Zamperini. END_OF_DOCUMENT_TOKEN_TO_BE_REPLACED

In this interview, we talk to composer Kurt Oldman about his work on a SuperMansion series and also touch on his past work. END_OF_DOCUMENT_TOKEN_TO_BE_REPLACED

In this interview, we talk to Gaayatri Kaundinya about her work as a composer and singer on The Hundred Foot Journey, Jungle Book and Million Dollar Arm. END_OF_DOCUMENT_TOKEN_TO_BE_REPLACED