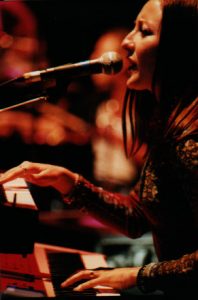 Once Upon A Time, Warrior, The Conjuring, Dolphin Tale, Wreck-It Ralph, The Crazies, The Factory, The Mechanic, Wake, Crossing Over,

Hi Cindy, thank you for taking time and doing this interview. Let’s start by introducing yourself and telling us a little bit about your background in music?

Thank you for having me! My background in music has been pretty eclectic. I started studying classical piano at a young age and just fell in love with it. I was a shy kid, but music was a place where I could express all kinds of emotions like entering a world of make-believe. In high school I fell in love with musical theater and in college I started writing my own shows with a classmate, Larry Todd Johnson. One of our shows, ALL THAT HE WAS, won the American College Theater Festival and was performed at the Kennedy Center. I’ve also played keyboard and sung in several bands, and I had the wonderful experience of touring with one of my childhood idols, Pat Benatar, for several years. Also, as a jazz singer, I sang with the Grammy-nominated L.A. Jazz Choir for several years. So my musical background and influences are a big melting pot.

I have always loved film scores, so I took classes in the UCLA Extension Film Scoring Program. Around that time I got a job assisting Mark Isham.

How did you get involved with the Once Upon A Time TV series?

I had co-composed another series with Mark Isham for two seasons—the Starz series Crash—and I was writing additional music for some other projects of his when he was hired for the pilot of Once Upon A Time. We both watched it and fell in love with the story and characters! From the very first episode, it was so well-written and such a creative concept. I told Mark I would love to be involved with it in any way.

Can we get a little bit of insight on your creative process with the Once Upon A Time TV series?

With a fantasy series like this one, we have the freedom to write music that is larger than life, which is a lot of fun. We have different fairytale realms, monsters, magic, and the ongoing battle between good and evil—a pretty great canvas for storytelling! It’s a very melodic approach with each character having their own theme and it’s fun to develop those themes as the characters change and grow.

We are fortunate to have a live orchestra every week, in addition to electronic sounds and samples we record in our own studios. I spend the first few days writing and sending Quicktime demos to the show’s producers for approval. If all goes well, I send everything along to the orchestrators and copyists to get ready for the session. I orchestrate as fully as I can while I’m writing, but because of the time crunch every week, we have a great team to add specific details and bring their own expertise to the score. And, of course, we have L.A.’s finest musicians recording every week who are truly a joy to work with. It’s always exciting to hear the cues brought to life by these incredible players.

How did you keep your score ‘fresh’ for the series?

We’re always looking for ways to keep it interesting! We have brought in new instruments for different realms—like bagpipes for Merida’s story, a bansuri for Red’s theme and the werewolf storyline, and a baroque string quartet for Dr. Jekyll and Mr. Hyde. I try to challenge myself with different ways of scoring a swordfight, or reharmonizing a theme I’ve used before, to show subtle changes in the character or story. Here’s something very nerdy—in season five, which took place in the Underworld, Mark wrote a Hell theme that featured a lot of tritones. The tritone was once considered “the devil’s interval” because in the world of classical harmony it sounds a bit evil. It was fun playing around with the Hell theme for Hades and all the scenes in the Underworld.

You worked along side Mark Isham on many projets. How did that friendship come about?

I started as his assistant, helping to organize recording sessions and budgets, etc. I did some tech work with sample libraries, music prep on many projects, played piano and sang here and there. As Mark got busier and busier, I eventually started orchestrating and writing additional music for him. He’s been a wonderful mentor and he has always been willing to let me try new things and grow as an artist.

What would you say was the most important thing you have learned while working together?

Mark is a master of so many musical genres, from jazz to electronic music to rock to orchestral minimalism, and he has a strong belief that “any kind of music can be film music,” not just a traditional orchestra sound.

So, I learned early on how to use a lot of different musical languages to tell stories. I learned how to explore the basic elements of a new musical style and learn to “speak” in it with my own voice. For example, I hadn’t written much electronic music before Crash, but I was able to start with Mark’s themes and sound palette to get my feet wet in the genre and then I brought a lot of my own musical ideas to the show.

Let’s talk about other projects you have worked on, namely the film, Warrior, which I absolutely love. How did you get involved with that movie and what were your main responsibilities during the production?

I loved working on Warrior—it’s such a powerful film about family and forgiveness. Gavin O’Connor (no relation, ha ha) is an excellent writer and director. I wrote additional music for a few scenes and I worked as score coordinator for the recording sessions. That was an interesting score because Brendan’s fight coach has him listen to Beethoven to learn to pace himself and Mark wrote a very cool cue for a training montage that incorporates Beethoven’s “Ode to Joy” from his 9th Symphony.

My studio setup is three Mac Pro towers—one running Logic for composing, one running Vienna Ensemble Pro and most of my sample libraries, and one running Pro Tools. I use the PT rig to run picture and then later to print stems for mixing. I have so many sample libraries! Some of my favorites are Spitfire orchestral libraries, Spectrasonics Omnisphere and Keyscape, and Ivory pianos.

If you had any advice for composers starting off in the business, what would it be?

Keep writing to picture every chance you get because it’s a different skill than composing your own music. For example, play along with scenes on YouTube with the sound turned down. Start developing your own musical language and experiment with different ways of scoring the same scene. Watch films and TV shows and discover how other composers are using music, what works and what doesn’t.

From a practical standpoint, look for opportunities to assist, observe, and get into the professional scoring environment to see what the business is like. Go to a scoring session and observe how all the people on a music team interact. And if you can assist or intern for a composer, there’s nothing more valuable than getting an inside look into his or her daily routine and workflow. Aside form the glamour and fun of scoring sessions, there’s a lot of time spent revising cues, re-conforming cues to a new edit, fiddling around with sound palettes, and working alone in a dark room. If that sounds like a fun challenge to you, you’re probably one of us.

I’m excited to announce that I’ll be premiering a new piece at a concert this fall: KCRW Presents The Future Is Female at the Wiltern on September 4th! This concert will feature women composers working in film, TV, and video games, and our music will be performed by the Hollywood Chamber Orchestra and a choir of L.A.’s finest session singers.

I also have a couple of possible projects which I cannot discuss yet. Here’s something I can talk about: my other passion is writing for musical theater and I have an original musical running in Chicago, which is getting great reviews! They are calling it “in the spirit of GLEE and WAITING FOR GUFFMAN,” and it’s a parody of the classic novel LORD OF THE FLIES called FLIES! The Musical. It’s very silly and over-the-top, and we have a fantastic cast and creative team. We’re hoping to bring this show to L.A. after the Chicago run is over.

Cindy, thank you so much for taking the time and answering my questions! I wish you all the best for your future projects.

Thank you for asking! It was a pleasure. All the best to you.

In this interview, we talk to composer Brandon Roberts about his work on Unbroken: Path to Redemption - An unbelievable true story of Olympian and World War II hero Louis Zamperini. END_OF_DOCUMENT_TOKEN_TO_BE_REPLACED

In this interview, we talk to composer Kurt Oldman about his work on a SuperMansion series and also touch on his past work. END_OF_DOCUMENT_TOKEN_TO_BE_REPLACED

In this interview, we talk to Gaayatri Kaundinya about her work as a composer and singer on The Hundred Foot Journey, Jungle Book and Million Dollar Arm. END_OF_DOCUMENT_TOKEN_TO_BE_REPLACED