Making atmospheres for games is always fun but it can also be a painful process if you are starting from scratch. Luckily, Sample Logic has come up with a tool that just might shorten a few working hours to mere minutes. The new Xosphere promises that it might be the ultimate tool for creating atmospheres, so let us have a look if Xosphere delivers on what it is set out to do. 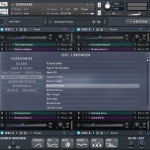 All of the 5+ gbs of Xosphere are delivered via Contiuata and that means that the download was pretty fast. Once downloaded and imported into Kontakt you get a nice little surprise. If you own any of the Sample Logic instruments than you know that they like to present you with a nice set of patches to choose from. In the case of Xosphere, you get only one Kontakt patch.

My initial thought was that this patch will take forever to load but I was wrong. It loaded reasonably fast. With the exception of the first sample, other samples were purged so no additional RAM was used and that is pretty cool if you ask me, though it is not something other companies haven’t used before.

Within the patch you will find all of the samples/examples folded into a few different categories ranging from Bizarre to Organic atmospheres. The list of the categories can be found here.

As a whole, there is plenty of content to keep you busy for a long time but this is not really where Xosphere excels. Before I explain this further, let us have a peek at how Xosphere sounds.

Let us get the technical stuff out of the way first. Xosphere is delivered in 44.1khz and 24 Bit, which is somewhat standard for Sample Logic. Some would probably want a higher resolution and that is perfectly fine. It is a matter of taste so I won’t pay special attention to it at the moment.

So how does it sound? The simple answer would be that it sounds awesome. The atmospheres sound big and beautiful and haunting when they need it to be. Again I could say that the sound is typical Sample Logic. I mentioned that in previous reviews that they tend to have a specific sound which again is of course a matter of taste but I have to admit that I really do enjoy it.

You can tell that plenty of work went into making atmospheres and it really shows. There are a whooping 350 designed atmospheres available to choose from and a whole lot of possibilities when combined using Xosphere’s graphic interface. 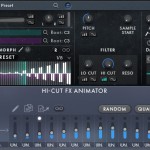 Sample Logic really brings the best out of Kontakt scripting and Xosphere is no exception. The scripting is simply staggering. The whole interface is made out of four main sound sources in which you load two sounds at a time, combined (if you use all four sources) you get 8 atmospheres (two per sound source) which make up one big sound. Since all of the sound sources are identical I will focus on one and its pros and cons. Let us start with the few of the cons, since there aren’t really that many if I’m honest.

One thing that sort of bothered me is that all of the keys in Kontakt were colored blue, which means that I should be able to play those keys/notes but it turns out that those were just blank notes. Sample Logic does have a solution though as you can adjust the root key of the atmosphere to a desired key on your keyboard however the color still stays the same so it can be a bit confusing at times.

Another thing which might not even be an issue of Xosphere but more of a Kontakt issue is that the tables and some knobs are really small to read or work with. I know that this is a fairly subjective matter but still, some might find it hard to read or work with the current knobs and tables.

That out of the way, let us pay attention to other goodies of Xosphere. Each sound source or as they call it the “oscillator” is equipped (starting from top to bottom) with a load and save function and an option to turn on and off the desired oscillator. Once clicked you are presented with the mentioned categories, (the ones from the main browser window). Might be a bit confusing but think of it this way; In the main browser window you choose a patch (samples plus all of the knobs set to a specific value) and in the sample selection you choose just the core sample. This gives you plenty of possibilities to play with. Remember that is only the one sound source/oscillator.

Next we have the two samples with the option to change the root key of the sample. The real gem though, comes just after these two samples. That is the morph function.

The morph function does as the name suggests. It morphs the two samples between each other and does it really well. On top of that you can either animate or record the morphing between the samples and that really makes a difference when building your own patches. 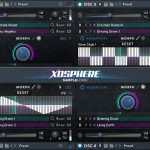 Another cool feature which I haven’t seen many developers focus on is the randomization feature. Randomization does as the name suggests. It randomizes all of the parameters and randomly selects samples from the sample pool. It is cool to have the option to come up with something quick if you are in a hurry plus it gives enough room for some happy accidents.

At the bottom of the instrument, you will find all of the Xospheres master effects (EQ, compressor, stereo widener, delay, reverb and others). These effects affect all of the sound sources/oscillators at once which means that you cannot target an individual oscillator. Depending on how you look at it, this can be good or a bad thing but personally I don’t mind it.

The look and feel of Xosphere is one of the best I have seen in Kontakt libraries mainly because it is packed with features which are nicely hidden but still very obvious to anyone. If you are thinking “Uhm what does this button do?” and press it, then it is most likely it will do something.

Xosphere will set you back for around $300 US or cca. 254 EUR and that can be a bit of a turn off for some. It is definitely not on the cheaper side compared to Aurora ($199/€145) from Fluffy Audio or Celestia ($139) from Impact Soundworks. Content wise the Xosphere is similar to Celestia while Aurora lags behind by a few hundred patches. I cannot share my thought on the sound quality from Aurora and Celestia as I have not tested them but in the end it will be up to you to decide which to buy.

Xosphere is a great product with an amazing sound quality and offers fantastic possibilities to play with. If you like making atmospheres than this tool is definitely what you are looking for but it comes at a price and you should know that there are also other possibilities out there. As for Xosphere, I am sure it will find its place among the giants in the sample library market.

Read our interview with Sample Logic. Don`t forget to rate the product yourself if you bought it in the “Reader rating” tab below!
Alternatives
You can also consider the following sample libraries
Aurora (Fluffy Audio)
Celestia (Impact Soundworks)
Omnisphere (Spectrasonics)
Xosphere review