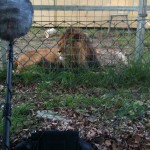 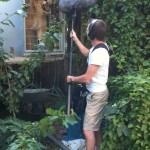 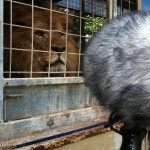 Read our review of the Wild Cats library HERE!

How long did it take you to create the ‘Wild Cats‘ library and did you do any special planning before starting the recording process?

Altogether it was a three-month project. I started out by doing some test recordings in the cologne zoo to get some experience with such animals and to see if it would work at all. It didn’t, the tiger I tried to record was pretty far back in his enclosure and it was just lying under a tree doing nothing for hours. We had the permission to record there, but we had no one to help us out or give us better access or so. What we did find out: without good preparation we would not be able to get good recordings. So after that we spent a lot of time tracking down private owners of wildcats, trying to find out if it would be possible to „rent“ them, where to go and such things. Together with David Philipp we got in contact with an animal trainer and recorded a little 16 weeks old black panther. That worked a whole lot better compared to the zoo, but it was in a town near our biggest airport Frankfurt, so we had to record inside his office. It sounded terribly roomy and wasn’t usable for the library – still it was another great experience on the way to get into the real recording sessions and this little guy was super cute with a lot of funny sounds.

How was the recording process? Where did you record these lions, tigers and cougars? What equipment did you use? Any special microphones used since the library comes in 192KHz format?

Well, after those experiences, I knew that we needed to record outdoors but with the possibility to get as close as possible to the animals. I recorded at two places: the lions were in a remote area in northern Germany, surrounded by only a few roads and forest. For the tigers I was outside of Seattle, close to Forks, the location known from the Twilight Saga. We recorded on a Sound Devices 744T using Sennheiser MKH 8050 (going up to 50kHz) and a Sanken CO100K (going up to 100kHz!). That is why using those animals for creature sound design or other heavy processing is so much fun.

Did you have someone there to guide the animals to roar and do various things or did you just hit record, point the microphone towards the animals and hope for the best?

It was a combination of both. When a trainer or “known” person is around, the animals behave a little bit different. The lions were trained animals normally presented with a show in circuses. The trainer was a freelancer, so not bound to a specific circus. He was able to get some cool sounds and told me a lot about the animals and how they react. I was with them for a whole week, from early in the morning to late at night, which is the time the lions start to make those group territorial calls. The only thing he did not want to do is make the animals angry in any way. He told me that the lions would remember and that might result in really dangerous situations when he is in the same cage with them. But he said that as long as he was not around or in sight of the lions, and as long as I didn’t touch them, I could try to make them nervous and angry. This worked great – the windscreen looks like prey for the lions and they were angry seeing me close to potential prey… The tigers on the other hand were film animals, trained as well (also not specifically to make sound, rather to walk a specific way, jump and do other movements). During feeding of the tigers I was able to get very close to them. That is something probably no animal likes and they want to defend their meal. That was an easy way to get angry roars out of those tigers. And most of the time I was sitting and waiting with the finger on the record button. Boring, but relaxing as well ;-)

Do you have any tips or precautions for people who want to record big cats like lions, tigers and cougars?

Run when a tiger turns his back toward you. This is the start for showing that it does not like you and it will try to pee on you. And those guys are damn good shooters. I didn’t know that and he hit my face and the windshield with this terrible stinking liquid. That was no fun.

I recorded very close (touching distance) from the other side of a cage. So there were only some metal poles between me and the animals. This was a great way to record, but I had to check first if those cages made any sounds when they were touched. The lions often tried to reach out of the cage and grab or bite me or the windscreen. A lioness once hit the windscreen and pulled it against the cage, trying to get it in. It was a funny scenario, the lion pulling on the one side and me pulling the boom pole on the other side. It took a good while until the lioness let it go. The tiger jumped against the cage sometimes, loudly roaring at me – that was great, but with some lose poles on the cage it would have been a useless recording.

Last thing: try to get there before they get fed. After feeding time, most animals will rest and are not very active. The feeding time itself is a very cool source for nice sounds as well.