Not having too many actual traditional drum kit sample libraries myself, Voyager Drums is a welcomed addition in that department. In the midst of all the cinematic sound designed percussion library hunting I do I tend to forget the natural and basic kits altogether and how much need I actually do have for them every now and then.

Even though I usually go for Kontakt libraries just for the sake of keeping things more unified inside my DAW and the sheer performance of Kontakt alone, there’s no reason not to consider this Engine 2 powered library if looking for clean and highly usable traditional drum kits with a nice punchy sound that works well for genres like Rock, Pop, Funk and such. 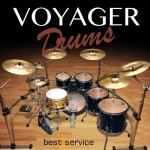 The kits were recorded in 24 bits and 96 Khz with 5 x Round Robin and 16 velocity layers in the Principal Studios near Münster, Germany. The library also includes dozens of synthesized bassdrum, snare and tom samples which can be mixed in to trigger while playing to increase the sonic possibilities of the kits.

The number of round robins, especially velocity layers, individual mics and studio effects isn’t quite as high however as in some of the competition out there with the exact same price tag. But the fact that I haven’t tested the competition, I cannot say how much these short-comings would matter in actual use if compared. For some the lack of the afore mentioned may tip the scale in favor of the larger and more detailed competing library, but for some it’s more about the right sound and that is why the Voyager Drums will have its audience. 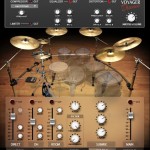 Upon loading up the full kit layer you are presented with an image of the drum kit with an effects panel at the top and menu tabs at the bottom. There are tabs for Bass, Snare, Toms, Cymbal and Groove.

The effects include a compressor, limiter, simple equalizer and distortion. The effects are surprisingly good and usable, the compressor has useful ready presets to choose from and you simply adjust the strenght of the effect via knob. The distortion is also surprisingly useful, as it can produce very subtle but rewarding results in the overall sound while also capable of turning the kit into more harsh and gritty sounding without overdoing it.

Under the different instrument tabs you can adjust the level of the Direct mic, Overheads and Room. You can adjust the panning of the direct signal because it was recorded mono. Each of the mics have attack and decay time knobs for adjusting the punchiness and tightness. The Overheads and Room mics have also knobs for delay, which can be used for time corrections, but is instructed to be used with caution. Quite simply it delays the playback of the samples from the corresponding mic position. 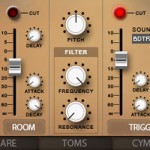 The Cymbals tab has the same options except no trigger sample. However you can adjust the individual levels of the hi hats, rides and crashes.

The Arranger tab allows you to trigger premade midi grooves which will automatically sync to your sequencer tempo. You can select from five different speeds 80, 90, 100, 110 and 120 bpm, each selection containing 48 different straight grooves, 12 triplet grooves and 12 fills.

The grooves come also as midi files to be dragged into your sequencer. There are also different controls options for the grooves to adjust rhythmic and velocity values. Some of the grooves are quite useful, some were a bit over the top for my taste for regular use though.

Both of the kits have their own distinct sound. To my ears Kit 1 has a more loose and resonating sound while Kit 2 feels more tight and punchy. By adjusting the different mic levels and their attack and decay values you can tweak the tightness or looseness of each of the instrument in a kit a great deal. By mixing in the included synthesized drum samples to trigger while playing you can further sculpt the sound of the kits. I soloed the synthesized samples and played through all of them and while they certainly are nothing special alone, they might be useful if used very subtly in the mix.

All in all for a person like me, who is not traditional drum kit expert, but still likes to have a professional sounding and detailed reproduction of one for projects needing basic drums every now and then, content is one of the major factors when trying to decide what to purchase. At 99€ as a drum kit sample library on its own, Voyager Drums sounds good to my ears and plays rather well and feels to have enough round robins and velocity layers for the use I would have for it, but when I go to the internet to browse the competition, the scale starts to wobble and not in the favor of Voyager Drums. Not because it doesn’t sound good, it does, but because I feel I would be getting more bang for my buck by going for the competition.

Give Voyager Drums a chance though by listening to the demos and decide if the sound is right for you. Technically it is not that much behind in comparison to the competition at this price, but it still is behind. If the sound is better for you than the competition, go for Voyager, because no number of round robins or velocity layers make up for an unsatisfying sound.