Sonokinetic enters the sampled choir market with their exciting new library called Tutti Vox. As the name is meant to suggest, the library is nicely compatible with Sonokinetic’s other orchestral libraries such as Tutti, Da Capo and Capriccio. Think atonal risers, falls, crescendi, clusters, beds and other similiar choir soundscapes, as they themselves mention in the product manual introduction. But let’s break the library down into more detail.

The library is divided into three Kontakt instruments, Core, Lingua and Spoken. Core consists of cinematic choir fx such as Glissandi, Clusters, Vocal FX, Tonal and Atonal Beds while Lingua is meant for more specific phrase building and more traditional sustains. Spoken, as the name suggest, is basically Lingua, but in spoken form, as in not musical.

Tutti Vox was recorded in 110 BPM but almost every phrase in the library is tempo-synced to your DAW. 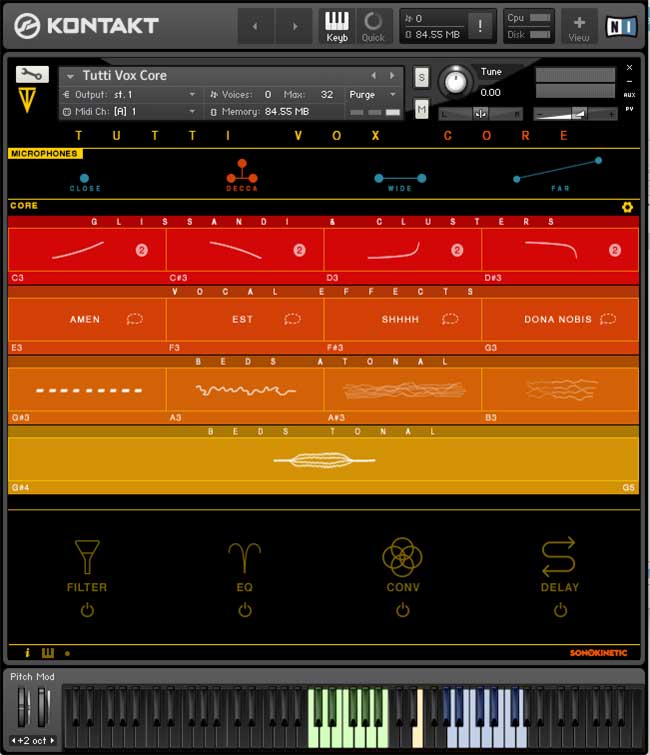 To anyone who is familiar with Sonokinetic’s previous orchestral libraries, the concept of Tutti Vox should be familiar but for someone new the user interface might be a bit overwhelming at first. Upon watching the tutorial videos Sonokinetic has on their website and reading through the manual the concept and the interface start to make sense and it shouldn’t take more than a few hours to get familiar with it.

Core is a collection of Glissandi, Clusters,Vocal Effects, Atonal and Tonal Beds. The selection is nice and broad, there are crescendi, decresendi, atonal risers, looped clusters, atonal and tonal beds, many of which come in 2, 4 and 8 bar lenght variations and some beds can be up to 40 second long.

The Vocal Effects consist of single shouts, whispered vowels, words and phrases. The vowels can also be looped. Most of the different sounds in Core have two or more round robins/alternative takes.

Personal favorites are the tonal beds of which they recorded a full octave making it possible to play chords with such cool patches as where the choir starts on key, then slowly drift off key and slowly back on key. Played in chords it’s a super cool effect. Also like with any of the three instruments, you can also apply four different FX into the choir. These are the Filter, EQ, Convolution Reverb and Delay.

Lingua is a multisampled instrument that allows you to create complex phrases inside the Kontakt interface. In the Quick Play mode the interface lets you fill in eight slots with words and have the entire choir sing the full phrase back to you in the notes you choose. In the Advanced mode you can have each of the four different sections of the choir have their own full phrase sung back at the same time making it possible to create more harmonically interesting melodies. 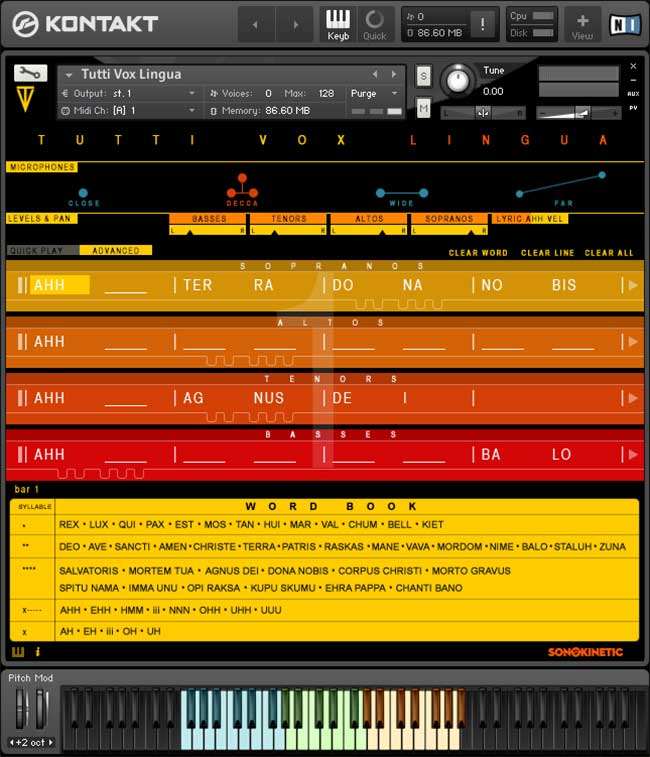 You can also adjust the mapping of the keys related to the choir sections very simply on the interface. For instance you can have the entire choir stacked in a way that it is playable with one octave on the keyboard or having it spread out on the keys so you have control over the full range of the choir. It is also possible to easily adjust the volume and panning of each choir section individually from the interface.

The word list itself is nicely fresh and a very welcome addition to any composer’s pallette simply because it seems to feature a lot of new words not appearing in other choir libraries. The list consist of one, two and four syllable words and short Ah, Oh, Eh, etc. Sustained Ahhs, Ohhs and the likes are also included so it is possible to have the choir sing simple sustained notes while as a special addition have the pitch wheel control the attack speed of the notes. The pitch wheel has the same effect on attack on all the patches in the entire library. Any legato patches are not included in the library.

Spoken is a collection of most of the same words as in Lingua with a few extra ones with three syllables. None of these words are sung however, but merely just spoken in no specific key and they are conveniently mapped accross the keyboard for easy pickings. The sections are split between male and female.

As a nice little feature the interface also has a randomizer function that will randomize all the patch and word selections in Core and Lingua by pressing the ‘O‘ in the Tutti Vox title at the top of the GUI. 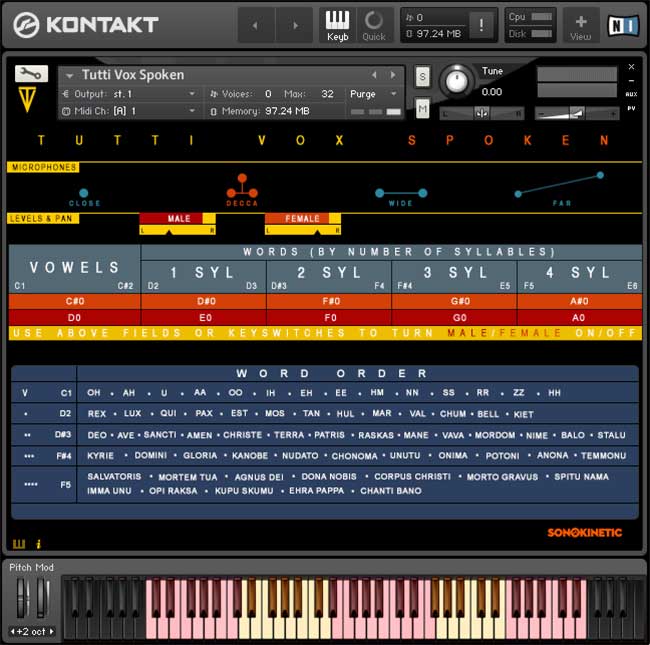 Tutti Vox sounds splendid out of the box, the Core instrument makes the library shine with the numerous variations of different choral effects and the Lingua instrument has a fresh selection of words to expand and spice up one’s choir sound pallette. The spoken words bring extra value to the whole package.

There aren’t any legato patches, but when playing back phrases you’ve built, you can use legato playstyle on the keyboard or using the sustain pedal to have the phrase change key mid phrase, preferably between syllables. The end result is very genuine sounding. The library aims for realism by providing a broad selection of recorded choral effect and a vast word list instead of going for legato patches and it does a good job in it.

The Ahh vowels in the library have two sets of recordings, one is softer and the other is with a more lyrical vibrato. You can adjust which style is used using the modwheel or have the key velocity determine it. You cannot crossfade between these two though. What I also noticed while using the modwheel in general with the entire library was that the modwheel simply controls the volume of the sound, not expressiveness. So basically when making the choir swell, it doesn’t actually crossfade between a softer and a more expressive recording of the same sound while applying modwheel like some other choir libraries. But again, with the glissandi effects Tutti Vox provides you with the actual recorded performance.

The four mic positions provide a rather decent variation to the overall sound, but you cannot mix different positions however due to technical restrictions of some of the other features. You can work around this in your DAW however with multiple tracks and patches loaded with different mic positions.

For some one who likes to use Sonokinetic’s previous orchestral libraries, Tutti Vox is probably a must addition to their collection as I can imagine how well it blends in with the likes of Grosso and Tutti. But Tutti Vox is such a refreshing choir library in it’s own that undoubtedly it would enrich anyone’s orchestral pallette with it’s very cool choral effects and phrase builder that can be used to create harmonically complex choir parts. If these are the things you are looking for in your next choir library, then the price is decent considering the content and capabilities of Tutti Vox.