Trinity Drums is a product of Sonuscore, known for such virtual instruments as Action Strings and Action Strikes. Trinity Drums continues their style of instantly usable ready-made loops that sync to your tempo and have a strong cinematic feel to them. But how does Trinity Drums differ from Sonuscore’s previous titles? Let’s have a closer look.

Trinity Drums is a Kontakt sample library of cinematic percussion phrases. The name Trinity refers to the way the content is broken down to three elements. The library is fairly small in size, only a few gigabytes, and doesn’t include any deep-sampled content.

The library comes with 117 Phrase-themes. Each theme consists of 5 Full phrases and 2 Single Hits, each broken down to 3 layers, the Low, Mid and High. The low layer has the low big drum hits, mid layer all the mid frequency percussion such as toms and other driving drums and the high has all the smaller percussion such as shakers and hi-hats. Sometimes these layers can also feature more unusual sound sources from the respected frequency ranges. These layers can either be triggered as the full groove playing all layers simultaneously or each layer individually, or various combinations of these layers. You can also replace individual layers between themes. The two single hit variations are a good addition, although without any velocity layers or round-robins, they only work as one time phrase enders or here and there, not repeatedly used. So far pretty much in line with some other virtual instruments like Evolve and Damage from Heavyocity. But there are things Trinity Drums takes a bit further. More on that later.

The 117 themes are divided into two sections, Cinematic and Modern. These again are divided into two categories, 4/4 rhythms and Odd rhythms. There are much more 4/4 phrases than odd timings, which is kind of understandable, but unfortunate at the same time. The Odds include such timings as 5/4, 6/4, 5/8, 6/8, 7/8, ¾, 5/4, 6/4, 7/4, 7/8. While there’s a good range of timings, there are only a handful of phrase-themes per an odd timing. Still, it’s definitely nice to have at least some since they are easily overlooked in such loop libraries. There are phrases in such tempi as 90, 100, 120 and 140 bpm. They will sync to the tempo of your project, however there are some issues with this, more about that later in the review.

Included in the Kontakt instrument also is a Mixer to adjust parameters for the Layers as well as an FX view to apply different effects to each Layer.

How does it work?

Everything you play on your keyboard controller will sync to your DAW, but as I mentioned, Trinity Drums does have something that separates it a bit from other similar products. There is also an option called Phrase Sync that makes each of the phrases intelligently start off from the right position of the loop depending on where the phrase, that was played first, is going at the time. This enables real-time performances where you can for example first play the High layer only and bring in the Mid and Low layers at any time and still be perfectly consistent with the groove. This mechanism also works within an individual layer, meaning if you play let’s say one of the Mid layer phrases and in the middle of the phrase start playing another Mid layer variation, it continues the groove seamlessly from where ever you were at the time in the previous phrase. This can be a good tool to sketch out ideas for the dynamics of the track you’re working on or if you are in a hurry, why not create the entire percussion element to your track in one go? For example in TV music library work such efficiency and fast workflow are highly useful.

This is something I personally would’ve needed in other such loop libraries as well. I liked to combine different loop variations together in a row but each loop would always begin playing from the start of the phrase, when recorded live in sequence. So you ended up having to set up different tracks that would all start playing together, but you had to automate each to mute an unmute at given times to create a more original phrase of your own. With Trinity Drums all you need is to do is hit record and play any loop variations on the fly at any time and the instrument will take care of the syncing and matching the position of the groove.

Trinity Drums looks good, the GUI is clear and not overly trying to impress you. You can browse the themes quickly with the arrows on the main page or select a particular theme from a list in a separate window. The names of the themes don’t really tell you much so you just have to test each theme to find what you’re looking for.

In the main page you are presented with three waveforms of the layers of the selected Phrase-theme. By clicking the theme name you open up a list of all the available themes. The waveforms are animated and follow the position when you play a phrase. Under the waveforms is the option to turn of the helpful previously mentioned Phrase Sync function that makes the layers match the initially played layers position upon triggering. 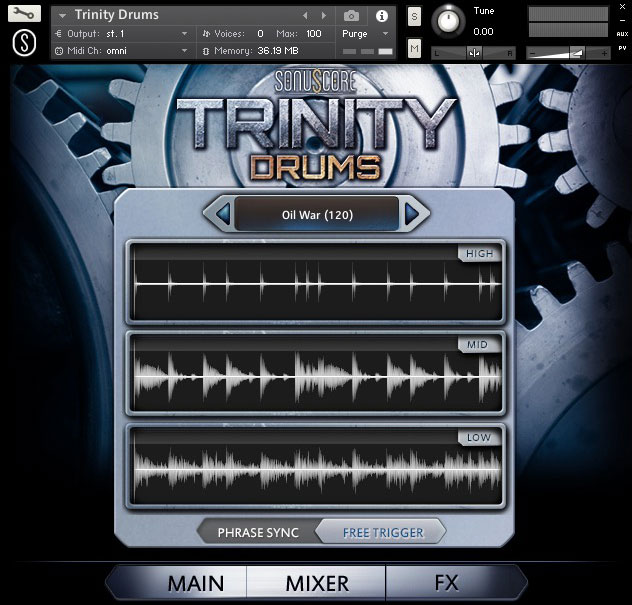 In the Mixer view you can adjust the levels and panning of each layer as well as a special Boost knob that adds punch and aggression to the sound. If you are familiar with the punish knob in Heavyocity’s Damage, it’s a very similar effect. In addition you can also dial in some delay and reverb as send effects. 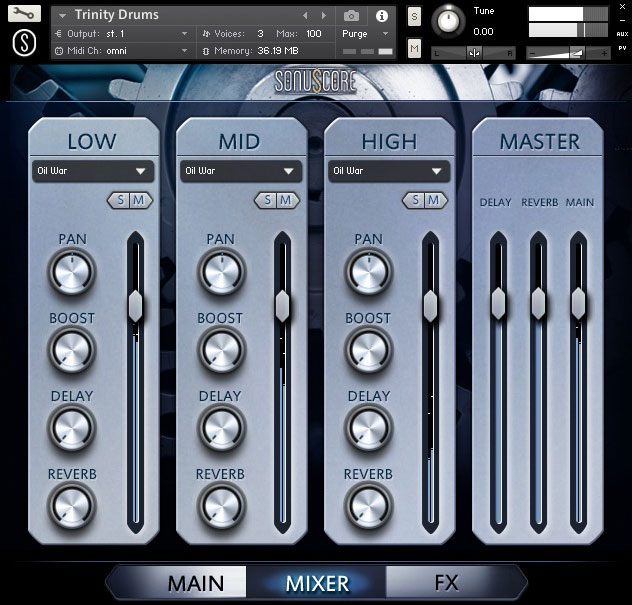 There is also a very important feature on the Mixer page, that being the possibility to exchange different phrase layers between different themes making your own Phrase-theme combinations. You cannot choose just any phrase-layer however, instead you are provided with a selection of compatible layers from other themes. It would’ve been nice to be able to do this replacing in the Main page as well by clicking the waveforms.

The effects view gives you a useful range of different effects to be applied to individual layers. EQ, distortion, compression, transient designer, basic filter and lo-fi processing. No presets are provided for these and everything is off by default, but you can fairly quickly adjust the sound with these processors to your liking. While it’s possible to go crazy with the effects, they are still your quite basic selection and lack a bit in possibilities when compared to some other similar products. The last tab lets you adjust the delay and reverb settings, nothing special here. 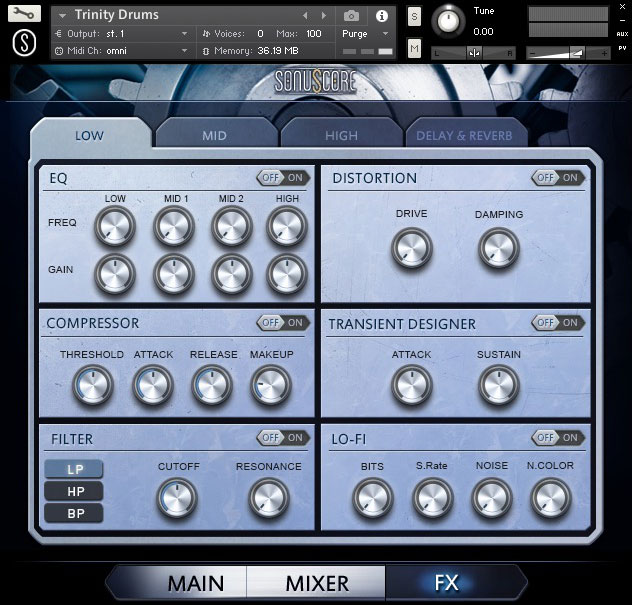 Trinity Drums in general sounds good. There’s good amount of variation between the different themes. The cinematic category sounds more traditional and organic while the modern more electronic and mechanical.

I have no doubts about this ending up on many tension cues for TV for example, it is a highly usable library, easy and fast to use and sounds convincing and reasonably high quality. The Phrase-sync option is a very welcome feature that will speed things up for people on a deadline. What I miss though is a feature like in some other similar libraries where you could create random internal effect presets with push a of a button to mutate the existing sounds. Since the library has a whole internal fx page, it would’ve been nice to see the makers utilize this section themselves at least somehow and not just leave everything turned off.

As I mentioned in the beginning of the review, there is a slight issue with the tempo-syncing to your project. While everything sounds reasonably good when playing a phrase that is slower than your project’s tempo, it doesn’t sound very good the other way around. If you load up for example a 120 bpm phrase to a 100 bpm project, the library uses Kontakt’s time machine pro to time-stretch the entire phrase to the lower tempo instead of doing this the Rex way in segments like the Nine Volt Audio libraries. This results in immediate recognisable artefacts and poor sound quality of a stretched out audio file. So I don’t really recommend using too much higher tempo phrases than your project tempo. This is a bit of a downside obviously, but you can probably in some cases hide some stretched out phrases as supporting background percussion without being too noticeably bad quality.

Trinity Drums costs 179€, which to some might be too much considering it’s a bunch of loops. However the way they are broken down into stems/layers and having the phrase-sync feature, the value goes up a bit. To me it would come down to how bad I would need new quick to use cinematic loops for let’s say TV work. The cost is border line for me, so it probably wouldn’t be first on the shopping list. The phrases sounded good however, nearly all of them highly usable out of the box, so I can still recommend this one for specific needs. Maybe not for major trailer work or film score, but quicker turnaround projects and sketching and source of inspiration for sure.