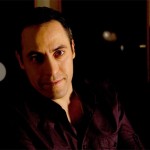 Thank you for doing an interview with TAS.

You have quite an impressive portfolio ranging from fully featured film to triple A games. Could you share with us, how did you get your start and what inspired you to make music for a living?

Prior to my composing career, I was a producer and songwriter in the music business for fifteen years. In 2001 I decided to transition into writing music-to-picture and video games. Under my artist name “Atlas Plug” I created a solo album, “2 Days or Die”, which was very successful in the licensing world and garnered a significant amount of attention in the video game industry. Within a couple of years I started receiving opportunities to score games. Eventually I landed some major projects like Need for Speed Underground 2 and Tom Clancy’s Ghost Recon Advanced Warfighter… These titles really helped propel my career to where I am today.

This is for the gear heads. Can you give us a brief summary of the equipment you use regularly (hardware and software)?

Sure, happy to get my geek on… ;) My most recent addition to the studio is a complete upgrade of my main computer rig… a new Mac Pro (black trash can) with 64 GB Ram, a dedicated 4 TB RAID drive with 2 SSD’s for my sound library and another 2 TB RAID dedicated for recording. The read/write speed of these things is off the charts, which finally allows me to run my entire DAW off one machine rather than multiple slaves.

Let us talk about your recent Halo project. How did you get started in the project and what were some of the obstacles that you encountered during the production?

Given that Halo Spartan Strike is the sequel to Halo Spartan Assault, which I also composed an original score for, there were fewer creative restraints this time around. The main challenge was the amount of time I had to actually work on the project and that a good percentage of the maps were not ready for me to see before I could create music for them.

That’s probably the question that I get asked the most by people both in and outside the gaming industry. The answer is pretty straightforward…Film, TV and commercials are all forms of linear music to picture; meaning they have the same beginning, middle and end. Every moment of that film you just saw happens the same way every time you see it. In contrast, the nature of a video game is that it’s a different experience each time you play it. So when you’re scoring to games, you’re scoring to possibility… but when you play the game, the music has to sound like it was meant to happen that way. I often compare music for games to musical Lego blocks. All the various pieces of the music need to be interchangeable and fit together in a variety of ways.

One of the most important aspects to consider is what the director is trying to make the audience feel; what is he/she trying to communicate? If it’s a game, what is the artistic style, the gameplay, what are the environments like, are there main characters, what is the story, etc.

You also seem to do a lot of work with various artists. How does your workflow change when working with artists?

When it’s an artist driven project, even when I’m the artist, like in my Atlas Plug music, rather than the music playing a supporting role, instead, the music itself becomes the focus. The musical identity and signature sound is defined by the artist’s identity.

What would you consider to be the proudest moment in your career?

That’s a tough one to answer. I’ve been incredibly fortunate to have many memorable milestones along my creative journey. Two immediate ones come to mind. The first was “breaking into” the gaming industry by creating my first artist album as Atlas Plug. Another huge milestone was that nine years after fulfilling my dream to get into the gaming industry, I had the opportunity to work on a re-creation of the very game that most inspired me to get into games in the first place, Halo: Combat Evolved. I will never forget the day that my friend Paul Lipson called me asking if I wanted to be involved… almost dropped the phone.

I’m still learning lessons every day. One that immediately comes to mind, perhaps since it’s a recent one, is to be careful of what you ask for. I’ve always felt that it was best for a composer to be involved in a project’s development as early as possible. I recently had the opportunity to do just that. But I also learned that sometimes it’s not always a good thing. If the project is too early in the development cycle, then there might not be enough information available to lock into a musical direction. Only when the project is close to being finished do you really start to get a true sense of the stylistic and artistic vision. If you start too early on the music, you can often end up wasting time going down a certain path only to discover it’s not the way you imagined it.

One of my favorite sentiments is a quote by Calvin Coolidge: “Nothing in the world can take the place of persistence. Talent will not; nothing is more common than unsuccessful men with talent. Genius will not; unrewarded genius is almost a proverb. Education will not; the world is full of educated derelicts. Persistence and determination alone are omnipotent.”

In this interview, we talk to composer Brandon Roberts about his work on Unbroken: Path to Redemption - An unbelievable true story of Olympian and World War II hero Louis Zamperini. END_OF_DOCUMENT_TOKEN_TO_BE_REPLACED

In this interview, we talk to composer Kurt Oldman about his work on a SuperMansion series and also touch on his past work. END_OF_DOCUMENT_TOKEN_TO_BE_REPLACED

In this interview, we talk to Gaayatri Kaundinya about her work as a composer and singer on The Hundred Foot Journey, Jungle Book and Million Dollar Arm. END_OF_DOCUMENT_TOKEN_TO_BE_REPLACED