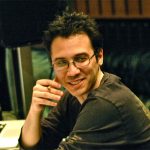 I grew up in the suburbs of New York City on Long Island. I attended New York University and at first I was a music technology major. My friends in the film school were asking me to score their films and my love of film music exploded over night. After college I moved to Los Angeles to start an internship at Hans Zimmer’s studio, Media Ventures. I learned more there in 4 weeks than I did in my 4 years at college and it solidified for me that writing music for film and television was what I wanted to be doing with my life.

Tell us about your work in Satanic, how would you describe the score you created for the feature?

The score for Satanic is a modern hybrid. There is a lot of synth work and some great string writing from Jim and I. We did not have a budget that allowed us to record a live orchestra so we had to dig in and make something truly scary and cinematic on our own. And I am very happy with the results.

You have scored many horror projects in the past, how do you make each soundtrack sound different and unique?

Changing up the template when starting a new project is key. Getting rid of the crutches that you are used to will make all the difference in the world and that is what inspires me to go to new places.

I write in Cubase and I print my mixes in Pro Tools where I keep my video playback as well. Currently both systems are on the Mac OS. I use 3 iPads, two for Cubase and one for Pro Tools. I’m running VEPro on multiple machines and have a plethora of instruments and FX plugins to play with. I also have some hardware synths like the Access Virus Ti, the Nord Lead 2 and most recently the Moog Sub37. I monitor with DynAudios in surround.

I am in love with the Zebra synth plugin. It sounds terrific and is a versatile synth. The Virus Ti, various Kontact synths from 8Dio, Heavyocity, and Spitfire are regulars in my template. Universal Audio makes such wonderful sounding processing plugins that I regularly use loads of them. The LA2A and LA3A, 1176, Fatsos, Dreamverb, Roland D-Dimension, the list goes on. So many great ones to chose from! And the Virtual Mix Rack from Steven Slate Audio is amazing! Sound toys are regularly all over my sequences as well as the FabFilter plugins. In Pro Tools I have been using a Lexicon reverb as well as Altiverb. The Virtual Mix Rack from Slate Digital is also all over my Pro Tools template and the ML-4000 from McDSP is a staple on my stems.

After all the conversations have been completed on direction I like to find some music or a film that inspires me to get in the right mood. It always starts with a bit of trial and error until the right chord is struck, so to speak. I will try to find the melody and direction of the music before starting in with the production, but sometimes those things go hand in hand. I can spend all day making one sound that triggers an avalanche of musical ideas.

I wish there were! That would take out a lot of the guesswork at the beginning!

Always be willing to change. It’s important to write something that you are connected with and stand behind. But also remember that you are writing to serve the picture and if it needs to be changed to better serve the picture than it’s a good thing. Even if the cue has been approved for 3 weeks and the dub is ending tomorrow. If there is a request to change something to make the film better, than get of your ass and make it better!

Can you tell us about any other upcoming projects you’re working on?

I recently finished a film about a mother and her son escaping an abusive father called Great Plains from director Blair Hayes and Executive Producer KristoferMcNeeley. It’s a terrific film and I hope it gets a wide release for people to see. I am currently in the middle of a film from director Matt Eskandari and EP Hannah Pillemer called 12 Feet Deep. Deep is a thriller about sisters who become trapped under the fiberglass cover of a public pool. It’s an excellent film and I am excited with the music I am coming up with for it. I can’t wait for this one to get out in the world as well!

Write what you love. Don’t try and be someone else. People will come to you for what you do best.

In this interview, we talk to composer Brandon Roberts about his work on Unbroken: Path to Redemption - An unbelievable true story of Olympian and World War II hero Louis Zamperini. END_OF_DOCUMENT_TOKEN_TO_BE_REPLACED

In this interview, we talk to composer Kurt Oldman about his work on a SuperMansion series and also touch on his past work. END_OF_DOCUMENT_TOKEN_TO_BE_REPLACED

In this interview, we talk to Gaayatri Kaundinya about her work as a composer and singer on The Hundred Foot Journey, Jungle Book and Million Dollar Arm. END_OF_DOCUMENT_TOKEN_TO_BE_REPLACED