Best Service releases a new Synth, designed for their own sampler “Engine” (which is available for free download). One Synth? No it is 266 Synths.

Titan 2 is the follow up to (and also including) Titan 1. While Titan 1 rather focused on the classic synth section, Titan 2 features more of these edgy modern sounds. Let’s have a look.

199 EUR isn’t a lot of money for the “most extensive and diversified synthesizer“ as Best Service describes their baby. The 80mb content can be performed in 64 bit and is structured in 12800 presets. You can either browse them by categories (bass, lead..) or by name. The names are slightly changed from the original instruments that were recorded. Omnisphere becomes “Ospher”, Massive becomes “Massif” and CamelAudio Cameleon 5000 “Chameleon 5000”, I think you get the idea.

Some synth house only 7 presets, while others feature more than 450 of them. Most synth were recorded in stereo, some in mono (it is displayed). But the immense content isn’t everything. The new surface of Titan 2 invites to blend two synth into each other and manipulate the sounds, so you are not bound to reuse old sounds but egged to create new sounds yourself. 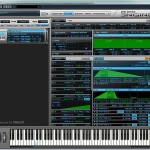 First thing that comes to my mind whenever I use an instrument in Engine is, that the layers to the left are very small and hard to read. This is also true for the user interface of Titan 2. It is a lot of information packed in oneplace and when using it for the first time, I had to work my way through all the parameters and it took quite a while before it started to make fun changing the settings. Once you grow accustomed to it, it gets easier.

Probably it is easier to work with when you are younger or have better eyes. One very positive feature is, that in the “Quick Edit” window, all sections & fx that aren’t used on the selected preset vanish behind a grey fog. Which helps maneuvering through the parts that are switched on.

The sounds are very very diverse. The samples are focused on the specialties of each synth. For example Massif got a lot of Dubstep Wobbles and Osphere got a lot of epic voice sounds. All sounds seem to be recorded & looped with a lot of attention to the detail. I never came across a part where it bugged me that it is looped sounds instead of live synthesis. Also dynamics and filters were recorded, which really helps to forget you are dealing with a sample instrument. On top, you can add a couple of nice fx including the well known Origami reverb.

What makes this synth outstanding and highly usable are the very short loading times. Best service kept there promise that each patch will load in under a second. You can easily browse through the sounds without waiting ever to hear the selected file. Wonder how they do that. The categories help with finding, what you are searching for. Almost everyone can make use of this synth. Every song that is in need for a synth will profit from the treasures of Titan 2.

If you want the sound & functions of a particular synth, you still will have to buy that very synth. Titan 2 cannot replace it. I think it is easier to explain with two examples. The synth “Blayd”, where Best Service most likely sampled Rob Papens “Blade” has very good Sounds from Blade, but the thing about the original toy is, that you can use an X/Y Pad to tweak the sounds, which of course is not possible with the sampled version. Also an other example.

Blue Too which emulates again a Rob Papen Synth, has 55 sounds, while the original version has more than 2000 presets + endless possibilities of creating your own sounds. This shows very much, that Titan 2 is more of a guide, that puts you on a journey through the history of synth and provides plenty of great sounds, that can be used as is or processed with the Titan 2 filters in a way the original synth can’t. Here and there you come across the synth you’ll like a lot and consider buying it. So Titan 2 serves as a very handy tool to build tracks covering the sound of synth from very different times and approaches as well as a great opportunity to try and fall in love with the sound of a particular synth.