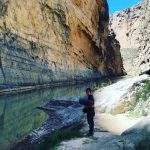 Hi Thomas, thank you for taking time and doing this interview. Let’s start by introducing yourself and telling us a little bit about your background in sound?

Thank you for having me. My name is Thomas Rex Beverly and I am a field recordist and composer based in Philadelphia. I love to travel and search for new sounds to explore. Specifically, I am interested in using my field recordings to preserve habitats in danger of disappearing during my lifetime.

Let’s talk about your libraries for a bit. What got you into field recording?

My decision to focus on field recording and start releasing sound effects libraries grew from my work as a composer. Over the last few years, I wrote several multimedia pieces with field recordings and time-lapse photography taken from regions around the United States. In these pieces, I developed “seasonal electronics” so that the electronic component of the piece changes each time it is performed based on weather data of a specific place. For example, my piece “Sitka” is a twelve-minute work for piano with “seasonal electronics”, exploring the relationship between music, technology, and nature. 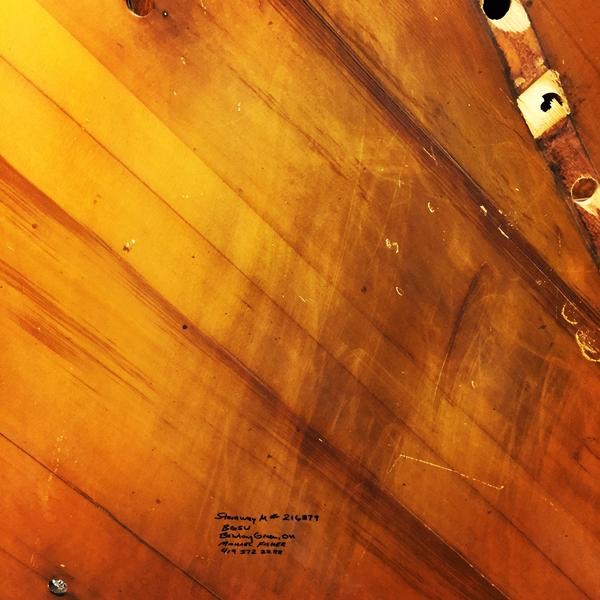 I titled the piece “Sitka” because Steinway piano soundboards are made exclusively from Sitka spruce, a variety of wood named after and growing in the region around Sitka, Alaska. When I wrote “Sitka,” I made a program in Cycling ‘74’s Max/MSP to poll real-time weather data from a weather station in Sitka, Alaska during each performance. As a result, the real-time weather temperature influences the parameters of the piece’s electronics and connects the soundboard or “heart” of the piano to a region where Sitka spruces grow. More specifically, if “Sitka” is performed on a sunny, summer day, the software generates higher pitched sonorities to create a light, open-sounding accompaniment track. Conversely, on a cold, winter day, the electronics add a darker, denser tone. Thus, I love using field recordings to document stunning pieces of nature and to make connections between concert halls and nature in real time with weather data.

The catalyst for my deeper field recording focus was a 1000-mile bicycle trip in 2015, when I rode across the American Southwest from San Diego, California to El Paso, Texas, and recorded the entire trip. During this wild adventure, I truly fell in love with field recording because it was during this extended recording trip that I learned to clear my mind, slow down, and be entirely present in a location. When I returned home, I decided I was ready to take the plunge, invest in professional recording equipment, and begin exploring new sounds as a field recordist. As of now, I have eight sound libraries and already have plans in the works for more recording adventures in 2017!

High Desert Winds was recorded in Big Bend National Park and ridge tops of the Davis Mountains. Could you tell us how you prepared to record wind sounds and what equipment did you use to record sounds?

I did a good amount of research before trying to record wind sounds. First, I picked up some great tips from episode 040 of the Tonebenders podcast where René Coronadoshares his experience avoiding wind while recording roller coasters. During this episode, René explains that you need to find a barrier to block the direct winds from the microphones for anything over 10-15 mph because even with a Rycote blimp, you cannot stand out in the middle of moderate winds without buffeting ending up in your recordings.

Since most of the winds I was trying to record in Big Bend National Park and in the Davis Mountains were over 20 mph, I took René’s advice and always found a natural windscreen when recording. In most cases, this meant I used a boulder or rock outcrop in the desert as a natural windscreen. One interesting technique I discovered for recording wind was to sit at the base of a tree with my microphones pointing straight up into the canopy and use the tree trunk as the natural windscreen. This technique allowed me to block the brunt of the wind and capture the excited pinyon pine needles twitching in the wind.

Additionally, I found Gordon Hampton’s writings on wind recording very helpful. For instance, Hempton’s writings taught me how wind pitch changes depending on the pine needle length. Since, the pinyon pine trees in west Texas have very short needles, my pine wind recordings have a higher resonance than you would hear from a conifer with a longer needle. Lastly, although I did not end up using Hempton’s technique of inverting a microphone stand covered by mosquito netting, I think his solution is genius and I plan to use this strategy in the future.

How hard it was to capture the sound of the High Desert Hummingbirds? How much time did you spend recording hummingbirds?

Another obstacle to my hummingbird recordings were the ambient sounds (mainly other wildlife) bleeding into the recordings. Since I was trying to capture clean hummingbird sounds, any time another animal noise appeared, I couldn’t use the recording. Therefore, I knew I needed to record a vast amount of material to get enough high quality sounds for my hummingbird library. Specifically, I recorded two to three hours per day for two weeks for about 30 hours total. Then, when I returned home, I edited my raw recordings down to 30 minutes to create a complete library. 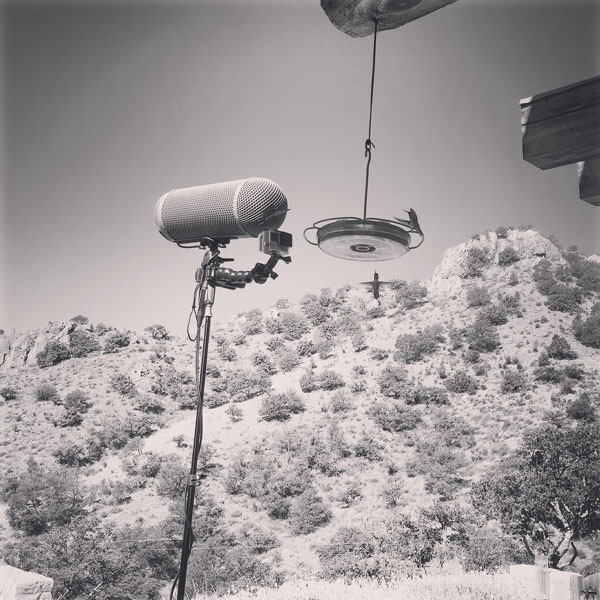 What do you think was the most difficult thing while recording High Desert Thunderstorms? What safety measures you did you take to record sounds of thunderstorms? 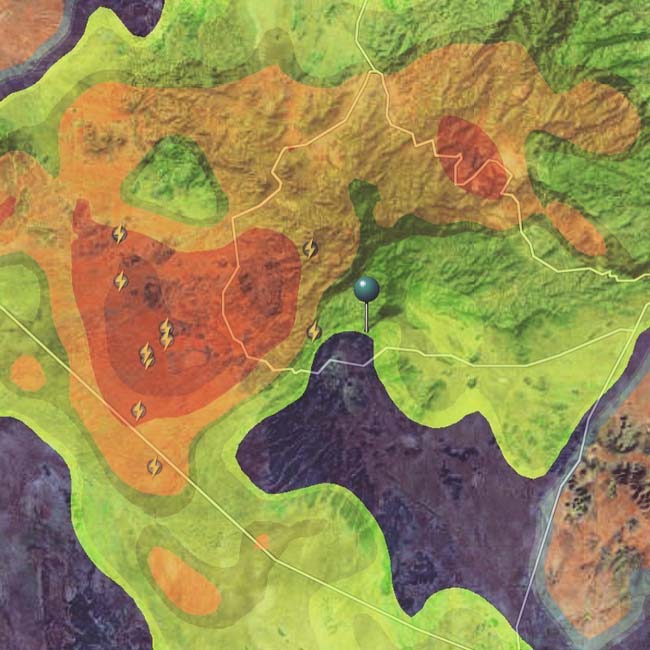 Secondly, when I was recording High Desert Thunderstorms I stayed at a house in the mountains at about 6,000 ft. near my recording site as an additional safety precaution. Therefore, I recorded most of the thunderstorms from inside a doorway with the microphones places outside the door about 10 feet away under a covered carport. After my first mistake with the headphones, I stopped monitoring and sat indoors watching the levels on my recorder. The biggest challenge to recording thunder was learning to ride the gain on my microphone preamps based on the activity of the storm. Sound travels at 1,122.33 feet per second, so I would have approximately five seconds to react to a lightning strike that was one mile away before the thunder reached my mics. At first, it was difficult to judge how far away the lightning was based on the brightness of the flash, but after a few failed attempts with some wild clipping, I began to get a feel for the rhythm. After some practice, I could see the lightning flash and know where to set the input gain to get the best recording (usually somewhere between 10 and 35 on my Sound Devices 702). In the end, I captured a variety of beautiful thunderstorm recordings that made my neighbor’s dogs bark for weeks as I mastered the recordings in my home studio!

What inspired you to record Ringing Rocks and how do you think people might use the sounds?

The Ringing Rocks and Hummingbird libraries both came out of my interest in recording unheard “sonic wonders” of the world. You can read the full story of how I recorded these mysterious rocks sounds here on the A Sound Effect blog.

These sounds are ideal for “found sound” percussion for films and video games because of their clanging strikes. Also, many of the scraping textures are a perfect starting point for rich metallic drones. Finally, if you do spectral manipulation of the harmonics with an effects plugin, you will create some wild textures! 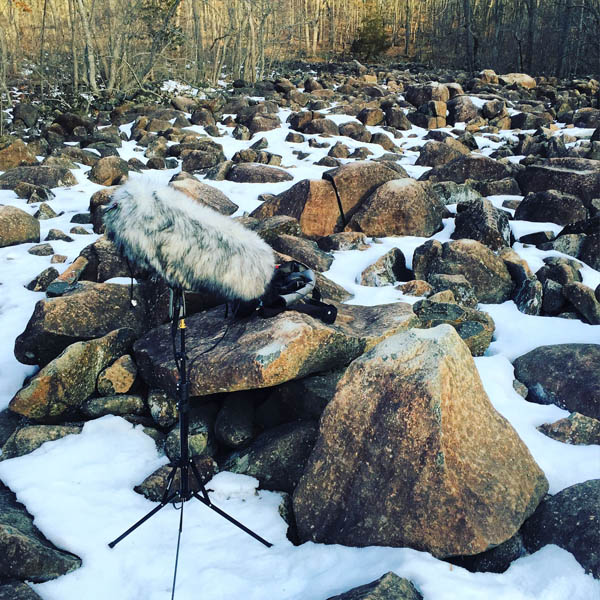 Let’s talk chainsaws. What do you think was the best part of recording your latest sound effects library High Desert Chainsaw?

This library was a little bit of a change of pace for me. My earlier libraries had been outdoor weather and ambience recordings so it was fun to dig into the nuanced mechanical sounds.

Could you tell us a bit more on how you placed microphones to capture all details need for the library?

For my Chainsaw library, I used conventional mic placements with my Sennheiser MKH 50/30 Mid/Side rig in a Rycote MS blimp. The recordings are all from close to medium distance perspectives and pointed directly at the chainsaw. However, I also made the RAW MS recordings available with this library so that sound designers can manipulate the width of the stereo image as needed.

My go-to recording rig is a mid/side setup using a Sennheiser MKH 50/30 and a Sound Devices 702. I also have a pair of DPA 4060s that I sometimes rig up inside the same Rycote AG blimp I use for my MKH 50/30. I used some PVC pipe and a couple mounts I bought at a hardware store to fit the DPA 4060s, their long cables, and the microdot to XLR adaptors all inside one blimp. I love the DPA 4060s, but their self-noise (23 dBA) is too high for the some of the extremely quiet nature ambiences I am trying to record. Hence, my next step is to invest in the MKH 8040s (with their 13 dBA of self-noise) for a super quiet ORTF ambience recording rig. 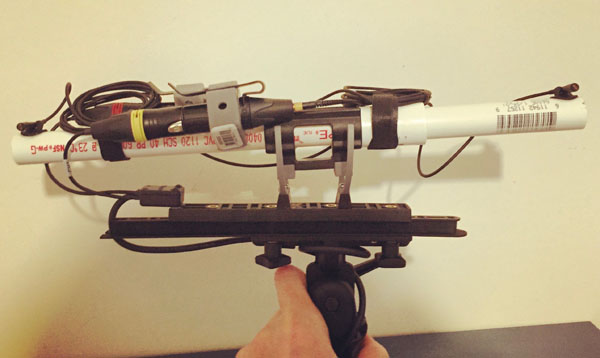 As far as DAWs go, I used ProTools for my sound effects editing and mastering workflow. If I am doing any designing I use Logic Pro or Ableton Live. Furthermore, iZotope’s RX5 is an essential part of my ProTools sound effects workflow and I’m also big fan of their Ozone 7 mastering plug-in. My other plug-in favorites are the complete set of GRM Tools plugins; I am never disappointed when I throw those plug-ins on a track to do some sound designing and I especially love the Spectral Transform pack to manipulate my Ringing Rocks samples. Lastly, I use both Soundminer and Basehead to embed metadata into my sound libraries.

One tip I have is to attach a GoPro camera to your blimp when you’re recording around large crowds like political rallies or sporting events. I have found this additional step greatly reduces the number of interruptions and questions like “What is that furry thing?”. These types of interruptions and questions ruin recordings so the fewer the better. For the most part, people know what a GoPro is, so if a GoPro is attached to your blimp, people tend to assume that your blimp is a microphone for the GoPro. Although we know this assumption isn’t true, if people see a GoPro attached to your blimp, I have found they are much less likely to interrupt your recording sessions. It’s amazing how much a GoPro can generally decrease the number of field recording interruptions from a passerby! 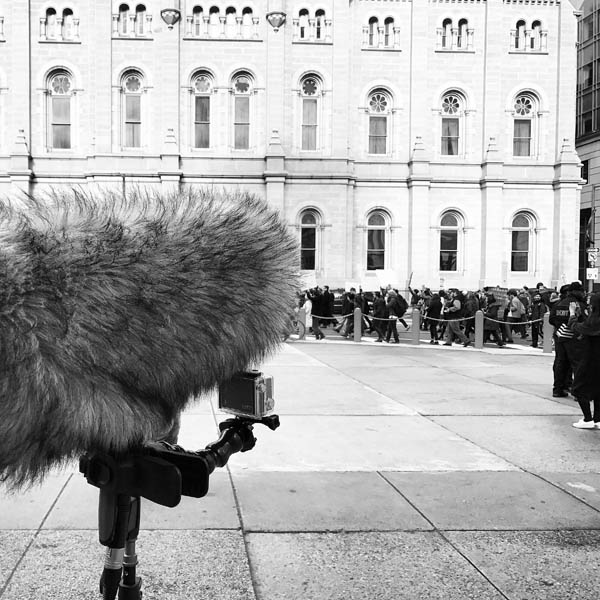 Additionally, there are many resources I would recommend to aspiring field recordists and sound designers. First, check out Paul Virostek’s blog and his eBooks on field recording because they were invaluable to me as I began making field recordings. Also, check out Gordon Hempton’s new book Earth is a Solar Powered Jukebox. This book is a compilation of his decades of experience recording stunning natural sounds from around the world; I have already picked up a few key insights for my upcoming libraries! Finally, read The Great Animal Orchestra by Bernie Krause. Krause has led a stunning life as a field recordist and The Great Animal Orchestra is one of my top audiobook recommendations because he includes his field recordings in the audiobook!