Thank you for taking time with us to do this interview. Let us begin with the simple questions first. Tell us a little about yourself and your latest project Elroy and the Aliens?

Thanks for inviting us! We’re Motiviti, a small indie gamedev studio from Maribor, Slovenia with a passion for adventure games. I am Jernej, co-founder, the-guy-who-does-everything-the-devs-and-artists-don’t-wanna and sound guy for Elroy.

Elroy And The Aliens is a point and click (or tap and swipe) adventure game, hand-drawn, animated in 2D and inspired by Saturday morning cartoons. It is about Elroy, a young, witty scientist who goes on a world saving mission of epic proportions to save the Earth from reckless aliens. The game is designed with the touchscreen in mind, but will be available on desktop as well.

Us too! And Monkey Island, Day Of The Tentacle etc. In fact, we still do! We play as much adventure games as we can without our health being at too much of a risk :)

Elroy is a puzzle-adventure game and by solving puzzles you, as a player, progress through the main storyline. You can see the game as kind of an interactive cartoon. We want the player to feel challenged and feel a sense of accomplishment when she/he solves a puzzle, but at the same time we don’t want to frustrate the player with too much complexity as some adventure games often tend to do.

To bring some action to the game we have also put some runner parts in the game, where your goal is to escape from what/whoever is chasing you.

Also, We want to make the puzzles and the whole gaming experience as one-finger-friendly as possible. This means no multi-action tools, no multiple-choice drop-down menus and no tiny objects to click on, while still remaining true to the adventure spirit.

The Elroy and the Aliens looks and sounds amazing. When did you consider that the sound and music should be an integral part of the game? How much planning went into sound and music?

Thanks! We started thinking about the music at the very beginning of development. Almost all of us at Motiviti play an instrument. I personally play guitar and have been part of various music projects and bands in the past 20 years of my life. So it’s no wonder we take sound design very seriously.

You can’t plan music, though. It’s more about finding the right sound, the tunes that complement the whole style and feeling of the game and enhance it. Finding inspiration can take time, and yes, it did so in our case. Not as much as it could, though. We knew from the beginning what we wanted the game to sound like but there is always a lot of back and forth and demoing between what you hear in your head and the final take that you put in the game.

For the music in Elroy And The Aliens we’ve been working together with Martin Bezjak from Epix Productions (https://www.facebook.com/EpixProductions). Martin is a professional producer and composer and – what are the odds – a sucker for adventure games, just like us. And also, he is a whiskey connoisseur with a full shelf. So this collaboration was a no-brainer. :)

The music production is not over yet and we still have some compositions to record, but with the initial work done, we have a solid sound base to build upon.

Have you developed your own audio engine for the game or are you using some of the established middleware out there?

We develop Elroy in Unity3D which covers audio as well.

Game audio has been overlooked for years and it’s not considered to be as important as other game development disciplines (art, code, design etc). What are your thoughts about this issue?

I’d say that game developers in general all agree that music is important. But there are two main issues. The complexity of music production and the costs involved with it.

As an indie gamedev, if you don’t have any musical background or do not have a home music recording studio, you are basically stuck with 2 options. Hire or collaborate with a professional music producer (which is a good idea in any case) or buy some royalty free music that you glue on top of the game at the end (which I wouldn’t recommend if you don’t want to have the same theme song as 153 other random flash games).

Now let’s look at an average one or two men indie gamedev studio. They are bootstrapping their asses off, living on sandwiches and soda and paying for everything from their own pockets. Hiring professionals costs money and if your budget is too small to hire one and at the same time you can not find a producer/composer that would collaborate with you based on some other deal (e.g. revenue share), the result is that you have to move forward with development and art and worry about music later. I’d say this is the reason why audio appears to be overlooked more than it actually is.

But this may just be my biased opinion. Music has been an important part of most of my life so I refuse to think that a person who is involved in the art of game design would just not pay adequate attention to the art of music, which in my opinion is an integral part of the whole experience.

When is Elroy and the Aliens scheduled for the release?

No. I’ll save them for my grandkids. Just go out, do your thing and have fun at it! 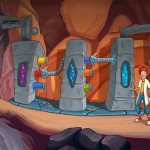 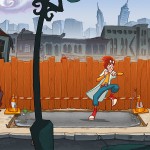 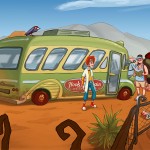 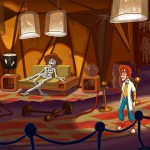 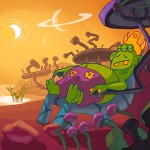 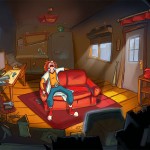 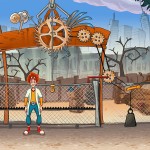