I’ve always wanted to record explosions and while I was recording a few guns recently I had my chance. Explosions are not something you can record everyday. I takes some planning, a good location that allows this kind of loud stuff and a very good shot. Since I have the gear all I needed was the above. It all came together after months of planning with the local gun shop. After recording a bunch of guns it was time to set off the Tannerite. If you don’t know about Tannerite, it is two (legal) substances that when mixed together and hit with just the right projectile at just the right velocity, it goes Boom!

We brought along 25 half pound canisters and planned how many we were going to tape together and set off. We started out with a few singles and doubles and then moved on to the big ones up to five together. They were set on wood tree stumps so they would not kick up too much dirt and debris. I recorded with all the microphones I had on the gun shoot placed at various locations in the gravel pit. I used a Sanken CSS-5, AT 835ST, MKH-416, PCM-D50 (96k), MKH-8040 and my MKH-8040ST microphone set at 24-bit 192kHz and 96kHz. I aimed the microphones in many directions and set them at different distances. I would guess the mics were anywhere from 30 meters to 50 meters away from the blasts. 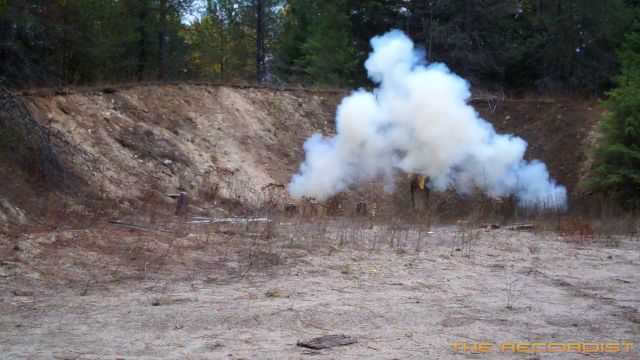 I did not know what to expect. I knew they were going to be loud but since we had just shot off some REALLY loud rifles my perpective was totally messed up. Needless to say they were LOUD. Your body feels the concussion but if your wearing hearing protection (like I was) they sound muffled. After we set off the first few smaller blasts it started to rain. I quickly grabbed all the gear scattered around the gravel pit and set it under the hatch of my car. It seemed like the rain was not going to stop so we called it a day and I torn down the gear. Then as quick as it came in it stopped. Since we were running out of time I quickly got the MKH-8040ST and Sanken CSS-5 set up and we recorded the remaining explosions.

I thought I was going to regret not setting up all the gear after the rain delay but after I returned to the studio and listened to all the takes I found the best recordings were the MKH-8040ST. These microphones at 192k sound amazing. They record the full spectrum of the blast and when pitched down live up to the hype.

The sounds you hear in the video are edited and processed with a small amount of H-COMP compression and REN-Bass along with some fairly agressive L2 limiting. All in all I was happy with the sounds recorded that day. The location has a smooth decay and the gravel banks help the initial concussion. Over the next few months I will be recording lots more explosions in many different locations. Keep your eye out for ULTIMATE EXPLOSION SFX Library in the near future.