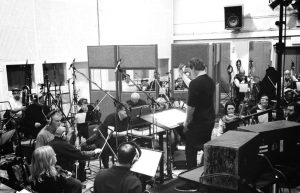 Particle Fever, Of Miracles and Men, The House I Live In, TEETH, THEATRE OF WAR

In your career, you have worked on a lot of projects. Let’s talk about Particle Fever for a bit. How did you get involved with project and what were your main responsibilities?

I got involved with PARTICLE FEVER initially because of director Mark Levinson’s relationships with several filmmakers that I had worked with in the past. By the time I met Mark and the legendary Walter Murch, they had music of mine “temped” into the film. It seemed like a natural fit from the start. My responsibilities were what they are with any film I score: find the “sound” for the film, and by scoring it, help a filmmaking team bring to life a story. And this was a very good story to tell!

What has been the most challenging part of scoring Particle Fever?

The most challenging part was making the high minded science relatable to a broad audience. In the process, it’s important not to pander, so I looked for a nice balance and was pretty happy with the end result.

You also scored over 2000 commercials which is quite impressive. How did you begin working on commercials and can you share your favorite moment or a commercial that you have scored?

I got an opportunity many years ago with a small music company called Jerry Alters Music. It seemed that I had a pretty good feel for what was required in scoring a commercial (so unique from scoring longer forms,) and before long, I captured the attention of powerhouse music company JSM (with original owner Jon Silberman.) That aspect of my career took off fairly quickly. One of my favorite moments was scoring a Coke spot for the Super Bowl for Hal Curtis at Weiden Kennedy in Portland called “It’s Mine.” It started a wave of many years straight of doing Coke Super bowl spots, which were all so different and very successful.

In case you want another, scoring a Travelers insurance spot for my friend Vic Palumbo with the director Noam Murro at the helm. It was a truly great spot about a man who built his own flying machine and jumps off a bridge over a river with the machine working as planned with one thing wrong: the man couldn’t swim, but was slowly and gently flying straight into the river!

What would you say is the biggest difference between working on commercials, documentaries and films?

There are huge differences between the disciplines. Commercials have their own short story arc, so any good score needs to satisfy quickly. Of course, I’m speaking of underscore, not the type of commercial that uses a pop song for cultural reasons. Documentaries are very tough; the edits change and the film keeps evolving right up until the last minute. I feel that it’s best when you score a doc as you would a narrative film, although you are dealing with interviews, library footage, etc., which can make the job more elusive.

Narrative films feel the most natural in a sense. The creation of the story is all up to the writing, directing, acting, editing, and score, and it all happens in a great collaborative way with brand new material. It is a complete crystallization of the imagination contained in the artist’s minds. Doc’s are that, certainly, but also commentaries or editorials.

I use logic, which I have from the beginning, with an array of sample libraries that constantly update and change (it’s hard to keep up!) When I record a live orchestra, my engineer Marc McClusky or one of the many I work with like Simon Rhodes at Abbey Road record on Protools HD. I find logic to be very intuitive software; I have always understood logic and its various properties very well. I would hate to be without it!

I’m working on a film about the one person that most people don’t know about in the information age, but should: Claude Shannon, who was the person who figured out that information can be reduced to zeros and ones in a famous 1948 paper. Claude Shannon wanted no publicity at all, but we owe our entire modern communication in every way to him. The film is called THE BIT PLAYER and is PARTICLE FEVER’s director Mark Levinson’s follow up film.

The most memorable is truly very hard. One thing that stands out is an unusual project, the Hayden Planetarium in NYC. I have worked on 4 shows there and have gotten to know the group at the planetarium, including Neil deGrasse Tyson, very well through these last 10 years or so. That is memorable for a space science geek like me!

Also, I studied traditional “classical” chinese music for a film called CINDERELLAMOON, which is the original Cinderella story (it actually comes from China in 678 A.D.) I fused my chinese writing with my symphonic writing, and was so proud to have worked through the cultural challenges. Chinese friends seemed to approve! I don’t think I’ve ever worked so hard. Chinese music is so rich with subtle traditions that are so unfamiliar to us western listeners!

I’m asked about imparting advice often. I can only offer this: work incredibly hard at the important things first, your development as a composer. Build that strong foundation, find your “sound,” strengthen your scoring skills by working on as many things as you can, and then turn to the career building things like connections. Too often composers go right to the politics first, then maybe get a gig way above their head and either turn to a big team to bail them out, or fall flat trying to live up to the gig. You may find yourself with a short lived career if you do that. I say be a complete musician/composer, and have a lot to offer the film world!

In this interview, we talk to composer Brandon Roberts about his work on Unbroken: Path to Redemption - An unbelievable true story of Olympian and World War II hero Louis Zamperini. END_OF_DOCUMENT_TOKEN_TO_BE_REPLACED

In this interview, we talk to composer Kurt Oldman about his work on a SuperMansion series and also touch on his past work. END_OF_DOCUMENT_TOKEN_TO_BE_REPLACED

In this interview, we talk to Gaayatri Kaundinya about her work as a composer and singer on The Hundred Foot Journey, Jungle Book and Million Dollar Arm. END_OF_DOCUMENT_TOKEN_TO_BE_REPLACED