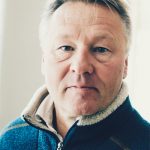 You are a respected composer within the TV & Film community. Being from Demark, did you break into the American market? And what was the most difficult part if any?

I started working in USA, specifically in Los Angeles, when worked on the original Girl with the Dragon Tattoo, which became a hit all over the world.

Nordic Noir is in part your niche or speciality; can you tell us more about the genre?

That’s a tough question! Lets see, Nordic Noir is basically a mood that runs through story telling whether its scripts, acting, directing, pictures or music. It usually centers on crime fiction and television dramas that feature somber narratives and austere urban settings. Still, from my point of view, the genre carries a delicate look, a “silent” but also very dynamic identity ….”

You are currently working on a benefit concert, have you done this before? If not what inspired you to do this?

As I got more and more projects on this side of the pond I started staying LA for longer periods of time, I was very lucky to meet Patricia Adler Ingram, she is the mother of one of my friends who invited me to stay in her house and set up a studio there…AND she lives 2 minutes form Griffith Park! I started hiking in the park and was really surprised to find all sorts of wild animals living right in the middle of this tinsel town! When P-22 was found in Los Feliz, I decided I wanted to do something to help.

I had started attending different concerts at The Greek Theatre, and that’s when I realized the venue is in the heart of the park so why not join forces and offer the community a world-class concert that would benefit the park and its urban wildlife. Quickly after that I met up with Friends of the Griffith Park and we decided to move forward and make it happen. :-) 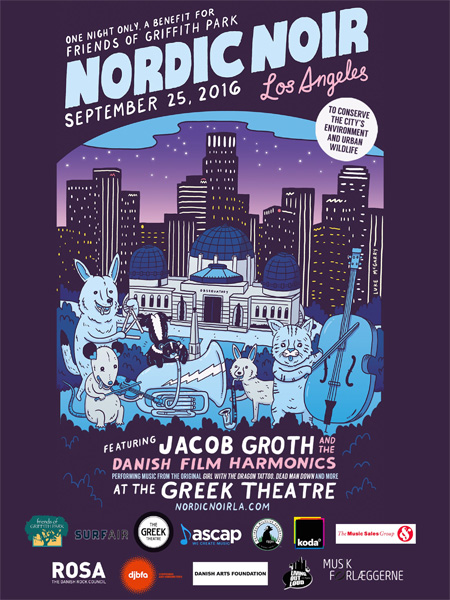 I have two very similar studio set ups in Copenhagen and Los Angeles accompanied by some skilled technicians assisting that assist me as I compose and arrange the music. We use MacBook Pro 2.8 ghz-Avid, Mbox 2, Mac screens, dynaudio, Adam speakers, and Neumann microphones. The software we generally use includes Omnisphere, Trillian, Stylus and others.

How are will you bring the TV & Film world to life in your presentation? What can your audience expect?

I will be performing alongside my group “The Danish Filmharmonics”, which is comprised of incredibly talented in musicians from Denmark. We will play music from both European and American movies and TV-series, Including Girl with the Dragon Tattoo, Modus, Skin Trade ,Young Andersen and many others. You can read more about the different scores on my web site, jacobgroth.com I will also include back-screen showing exclusive scenes from the different movies fused with more abstract moods.

You are also working on Flatliners reboot! Can you tell us about how that project came about? Remakes are always tough, d o you feel any pressure since the last one was so successful?

Honestly I never feel any pressure when working on reboots, I jut get in the studio and hope that we can add yet another dimension to that storyline. Niels Arden is in Canada shooting right now as a matter of fact!

I feel most creative when I am in my old house in the middle of the Swedish woods, This is where I start writing most of my scores :-)

Lots of secrets, thats why they are secrets! :-) But one secret I will share is that discipline means EVERYTHING!

Sometimes to end up combining different sounds, filters etc. by either coincidence or pure mistake, and suddenly the result sounds magical….

In this interview, we talk to composer Brandon Roberts about his work on Unbroken: Path to Redemption - An unbelievable true story of Olympian and World War II hero Louis Zamperini. END_OF_DOCUMENT_TOKEN_TO_BE_REPLACED

In this interview, we talk to composer Kurt Oldman about his work on a SuperMansion series and also touch on his past work. END_OF_DOCUMENT_TOKEN_TO_BE_REPLACED

In this interview, we talk to Gaayatri Kaundinya about her work as a composer and singer on The Hundred Foot Journey, Jungle Book and Million Dollar Arm. END_OF_DOCUMENT_TOKEN_TO_BE_REPLACED