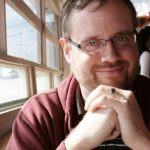 Children’s Hospital, A Better You, They Came Together, Filthy Preppy Teen$, Wet Hot American Summer: First Day of Camp, How to Be a Latin Lover

Hi Matt, thank you for taking time and doing this interview. Let’s start by introducing yourself and telling us a little bit about your background in music?

I’ve been interested in music, and especially film music, for as long as I can remember. I grew up in a Chicago suburb, Glen Ellyn, IL and started percussion lessons at an early age and all throughout high school. I studied composition at Northern Illinois University and then Scoring for Motion Pictures and Television at USC. I’ve been working as a composer for almost 12 years now, beginning my career as a composer’s assistant for Steven Stern and writing for Selectracks, his music library, for a few years, then as an assistant and writer for Craig Wedren before moving on to scoring film and tv.

How did you get involved with Childrens Hospital which won four Emmys?

I was working for Craig at the time on “Role Models” and the director of the film, David Wain, was one of the producers of Childrens Hospital. So when he, along with the other two EP’s Jonathan Stern and Rob Corddry were looking for a composer, Craig recommended me. This was at the very beginning too when the show was a webseries, and I remained on the show when it moved to Adult Swim and throughout it’s seven-season run.

Could you share more about the process of making a score for the Childrens Hospital?

I begins by meeting with the producers to go through each episode and getting a feel of what they’re looking for with the score. The biggest question was always whether an episode would have the “regular” sound, or if we would be doing a specific parody of another show, film, or style. We would also discuss emotional beats, particular story points we want to emphasize, and various strategies for scoring jokes and punchlines.

When I get back to the studio, I’ll make a general map/plan of the episode and figure out which order to write in. That can vary depending on what the episode needs, but I usually like to start with the biggest moment of the episode, or a key dramatic cue that’s a pivotal point for the score. I like to know where I’m leading up to, dramatically and musically so that means I rarely write cues in chronological order. Once a first pass is complete, I’ll send off to the producers for notes and then we’ll collaborate back and forth until everyone’s happy!

What has been the most challenging part of scoring Childrens Hospital?

Each one of the various parody episodes, especially in the later seasons, presented a unique challenge every time. With a typical series, the style of the score will stay generally consistent throughout each season. Even if there are new themes or concepts, they will generally fit within the vibe or palette of the greater scope of the score. Whenever we would do a parody episode though, I had to scrap everything and start over from scratch. New palette, themes, concepts, etc., and all this while still trying to hit my deadlines.

It was a challenge I was thrilled to have however, and I credit it to being one of the biggest things that helped me grow as a composer. Constantly having to change up my style and having to dig deep and study a particular score or genre was like composer boot camp.

You have scored a lot of comedies. What do you think is the hard part of making a comedy score?

Staying out of the way of, or complimenting, dialog is key for scoring any genre, but with comedy I think it can take on an extra dimension. When scoring around a funny line of dialog, or a punchline, you want to frame it in such a way that the audience pays attention to it while still having the right amount of emotional weight, but without drawing too much attention to it and risk saying “hey, this is a joke!” with the music, which 90% of the time takes the funny out of it. Plus it helps to have a sense of humor.

How did you keep your score “fresh” when you worked on NTSF:SD:SUV?

One of the fun things about working on a cop/procedural type show, even a parody of one like NTSF, is that score calls for synths and effects a lot more than some other genres. I love finding and manipulating new sounds and synths and then blending them in with orchestra. So giving the score a sonic fingerprint was fun. Plus as with Childrens, the parody episodes helped a lot by allowing me to incorporate whatever style or sound the parody called for. NTSF did have more of a continuous sound from episode-to-episode than Childrens did, but the new characters, villains, and parodies every episode all required unique material to be created on top of that consistent foundation, so the score didn’t get stale.

What has been your favorite project to work on and why?

It has to be Childrens Hospital. I’ve been fortunate to work on a number of great projects with wonderful people, but Childrens was where I cut my teeth and grew as a composer, and the guys that ran the show were such a joy to work and collaborate with every day.

As a composer, what programs do you prefer to use?

I do all my writing and production in Cubase. I’ve played with almost every other DAW at some point and I find it just fits with the way I like to work. I occasionally use ProTools, but mainly when I’ve collaborated with Craig Wedren who prefers that. I’ll use Finale when I need to make scores and charts. For synths, I love U-He’s plug-ins, especially Zebra and Diva.

I prefer to keep it somewhat dynamic. I’m constantly trying to evolve and discover what my particular sound or style is, so shaking things up helps inspire some additional creativity. That being said, I always begin by mapping out a scene or score, and trying to get it in my head before experimenting or writing.

Going through a Scoring program like USC, Berkeley or UCLA helps tremendously. They give you a crash course on the fundamentals and the unique differences in production music composing. Plus, they can help you make contacts with other composers and young filmmakers. Try to work as an assistant for other composers too. You can learn so much from their experiences and gain work as part of a team. Lastly, get out of the studio and meet people! Try to find any local meet-ups for filmmakers, editors, etc.

Matt, thank you so much for taking the time and answering my questions! I wish you all the best for your future projects.

My pleasure, and thank you!

In this interview, we talk to composer Brandon Roberts about his work on Unbroken: Path to Redemption - An unbelievable true story of Olympian and World War II hero Louis Zamperini. END_OF_DOCUMENT_TOKEN_TO_BE_REPLACED

In this interview, we talk to composer Kurt Oldman about his work on a SuperMansion series and also touch on his past work. END_OF_DOCUMENT_TOKEN_TO_BE_REPLACED

In this interview, we talk to Gaayatri Kaundinya about her work as a composer and singer on The Hundred Foot Journey, Jungle Book and Million Dollar Arm. END_OF_DOCUMENT_TOKEN_TO_BE_REPLACED