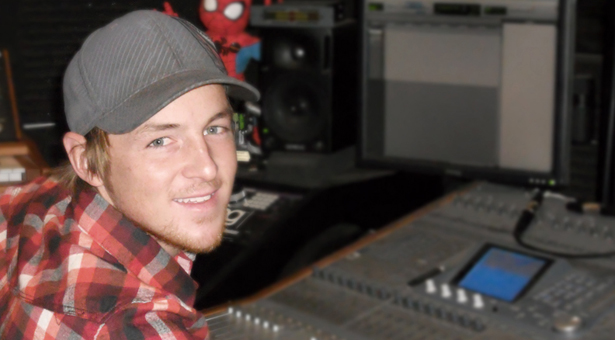 God of War, The Last of Us, Uncharted 3, Twisted Metal, The Unfinished Swan

Hi Mike, thank you for taking time and doing this interview. Let’s start by introducing yourself and telling us how you started working as a sound designer?

Hi, thanks for having me! If we want to go backto my origin story, I started working in sound professionally in 2006. Like a lot of people, I got my start as an intern climbing my way up the latter. My first gig was at High Moon Studios in San Diego, CA. As an intern there, I was tasked with managing the team’s sound library. On top of editing and indexingany files they recorded, I was also actively out recording material of my own. For example, High Moon Studios worked on The Bourne Conspiracy which had a whole level located in a harbor. It had a bunch of docks, boats, water, etc. Being located in San Diego, I frequently visited the harbors up and down the coast to capture water laps, wave crashes, dock creaks, footsteps, boat movement, and the list goes on. They would take the material I would get, start designing with it, and then I would be off the next day trying to capture what else we needed. I think having an intern available to go out and record like that really helped make those games sound better. That went on for a few months until I was brought on full time and fully embedded in the team. I was then recording and creating my own content and implementing it in game.

Fast forward to today, I’m now Lead Sound Designer at Sony PlayStation and have worked on over a dozen projects with various developers. It’s been a wild ride but I couldn’t be happier with how things have progressed. I feel extremely fortunate.

Let’s talk about one of my favorite games, The Last of Us. Your portfolio says you were responsible for cinematics and other tasks. How did you approach the cinematic sound design?

My role was overseeing most of the in-game cinematics (IGCs) throughout the game. For simplicity throughout development Naughty Dog has taken the approach to call any one-off animation or scripted event an “IGC.” This could be something as simple as opening a door, a button mash mini-game, or a scripted sequence that’s a part of gameplay. For example, I worked on a scene where Ellie is chased and gets shot off her horse and another scene where Joel is trapped inside a bus as it fills with water, submerging him.Usually these scenes involved multiple sound emitters individually placed on the specific objects they were scored to or placed at locations that created the strongest sense of immersion.

I didn’t do all of this alone though. To cover so many of these moments (and there were thousands) I also managed and tasked out a remote group of sound designers in San Diego. As they delivered assets I would act as the quality control filter before final sign off by Naughty Dog’s Audio Director, PhillipKovats.Once approved, I would help implement those assets or provide the content to members of our implementation team.

To comment on the aesthetic direction, that was established early on in the project before I had arrived. The overall goal for the project was to have everything feel grounded, live in the world, and have a strong focus on details. I remember conversations where we would be struggling on certain door creaks because they weren’t giving off the right emotion. After we finally found something that worked, we would filter the critiques down further. How does the overall sound fit into this portion of the game space? For example, let’s say a door opened to an exterior space with snow.We should probably have a cold wind blow in as it opens. Also, because it’s cold outside, maybe there’s rubber weather stripping on the bottom of the door that drags along the gritty and aged floor as it swings open. Let’s make sure we can hear that represented in the movement too. It can be a bit crazy and exhaustive at times, but we took that approach and attention to detail for every asset we created.

Sony has a very large commercial library to pull from when we are in a pinch but most of the time we were trying to record unique material as much as possible. Erick Ocampoused recordings of his son crying when he was a baby for the Bloater. I believe Derrick Espino created the sound of the UI menu tick by dropping a sugar packet on his desk. The elevator Joel uses in the hospital after rescuing Ellie is actually Naughty Dog’s service elevator that I recorded a few weeks before we were locked out of the final build. So up until the very end, we were trying to record stuff whenever we could.

What was your favorite moment and what was your most difficult moment during the production of The Last of Us?

For me personally, it was the attention to detail everyone was putting into their work. Because it was such a quiet game at times, anything we did had a magnifying glass on it. So we worked very hard to make sure sounds lived in the world properly and kept the player immersed. This could be very challenging at times, so it probably lent itself to be my most fulfilling and difficult moments throughout production.

You also worked on the DLC for The Last of Us. What were your responsibilities during the production?

I worked on the DLC for a few weeks, covering for another sound designer while they were on holiday. My responsibilities during that time were the same as before – I was tasked out with owning a good portion of the IGC work. If you use the photo booth in the mall you can hear my voice making cute, little bunny, happy sounds!

On the technical side, you are quite familiar with proprietary software as well with middleware such as Wwise. How important do you think it is for a sound designer working in game audio to know his or hers way around middleware?

Yup! I actually work for Sony Interactive Entertainment’s service group. We call ourselves PD (Product Development) Sound. As we jump from team to team and support different projects we have to learn new tools and pipelines all the time. In general, I think it’s a must that someone looking to get into game audio know their ins and outs of the middleware.

You also run a forum for sound designers called Audible Worlds which also features or has started crowdsourcing sound effects libraries. Could you tell us a bit of a background story of how and why Audible Worlds started?

Sure! Yea, I started that site a bit ago in hopes to create a central location for sound enthusiasts to communicate and share knowledge. It goes through waves of activity but when we do these crowdsourcing projects the community really comes out and contributes. We’ve done five crowdsourcing projects so far and it has been a lot of fun! Basically, if you sign up and contribute to these libraries you get everyone’s contributions as well. So it’s a fantastic way to grow your own personal library with recordings from people all over the world!

Uncharted 3 was a fun game and it has a great sound design in it. When did you get involved with the project and what were your main responsibilities?

I was actually brought onto Uncharted 3 very late in development. I helped with the final push of the game and contributed sound design to a few in-game cinematic sequences and ambient set pieces.

Our gear tends to change depending on what developers we are supporting and where we are located. I am normally working out of Sony Santa Monica’s building though. There we have custom built sound pods designed by Chris Pelonis. In my room I have a 5.1 setup using his Model 110P monitors. I also have a cheap Viziosoundbar that I think was $89 on Amazon. I usually reference on those, a pair of Beyerdynamic DT 770s, and the TV speakers. We use Pro Tools across all of our projects and have plugins from all of the usual suspects.

You can check out some of Chris’ stuff here: http://www.pelonissound.com/

Do you have any tips for aspiring sound designers, on how to gain a foothold in the game audio industry?

In general I would make sure youhave a captivating demo, know your middleware,and write a cover letter that hits on specifics for where you are applying. I personally tend to favor an applicant’s cover letter that relates their professional aspirations with things we are doing at the studio.

Mike, thank you so much for taking the time and answering my questions! I wish you all the best for your future projects.

You too, thanks for having me!