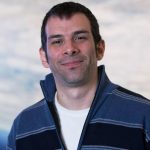 Hi Daniele, thank you for taking time and doing this interview. Let’s start by introducing yourself and telling us how you started working as a sound designer?

Thank you for having me! I’m a freelance sound designer based in Los Angeles. I come from Italy, where I started working remotely on feature ﬁlms produced in New York and Los Angeles and for TV animated series co-produced by RAI Italian National Television.

When I moved to Los Angeles, I worked on several ﬁlms, the video game Call of Duty: Inﬁnite Warfare at Inﬁnity Ward as an in-house senior sound designer, and recently on Destiny 2 as a cinematic sound designer.

My ﬁrst approach to sound design comes from music. I’m a former timpani and percussion player in symphony orchestras and bands. I had the chance to play different music genres and styles that have shaped my artistic sensibility. As a percussionist, I’ve been inﬂuenced by the research of new timbres from musical instruments and tools, experimenting any kind of combination to create sound effects.

Later on, my passion for ﬁlm storytelling brought me to dive into the manipulation of the sound itself, as a way to tell stories and arise emotions, without any musical support, as a self-contained narrative. This particular approach, along with my passion for storytelling, led me later to work as a sound designer for ﬁlms and video games.

Let’s talk about Destiny 2. Your porfolio says you were responsible for cinematics and other tasks. How did you approach the cinematic sound design?

Talking about Destiny 2, my main goal was to provide a sound design able to characterize every element, action, ambience or ﬂying vehicle in the cutscene and, through those details, support the storytelling of the video game.

Especially for in-game cinematic, I think the overall sound needs to be really exciting, articulated, detailed and particularly focused on the enhancement of any element in the cutscene that inﬂuences the storytelling, in a way that is truly pertinent to the visual.

For example, for a spaceship ﬂying towards the camera from distant, passing very fast in front of it and leaving the scene, I had to consider the model and size of that ship to create the right tonal timbre, the amount of details on its engine that become increasingly present, fast and impactful, and keep that sound fading out to the background and blend into the ambience.

I believe it is a critical success factor to engage the audience’s sensibility during the cutscene, as it guides the player to comprehend the tension and pathos of the story line. In this process, sound design has the main role to sonically pull out those emotions, and that’s my approach.

I mainly used the company sound library to custom my ﬁnal design. I used few elements for ambience from the Quiet Planet by Boom Library as a support.

How long did it take you to ﬁnish the cinematic sound for Destiny 2?

My collaboration lasted approximately 3 months, during which I had a very intense and beautiful time while working hard on the cutscenes assigned to me and having a lot of fun!

What was your favorite moment when you worked on Destiny 2 and what would you say was the most difficult part of the job?

My favorite moment was when I worked on a cutscene with multiple spaceships passing very close to the camera. It was very exciting to ﬁnd the right approach to that scene, deciding which ship had more propulsion in the engine, which one was more heavy and deep or was faster while lashing the air, giving to every one their own signature sound.

The most difficult part I think was in another cutscene, when the spaceship passed over the camera from behind, moved in front of it towards the background, ﬂying in a very large circle, and then to come back closer, passing very fast in the middle of the scene.

It has been challenging to keep the sound of that ship, without losing it while was moving in the distance and modulating it to recreate the very long turn in the background, to ﬁnally reprise the same tonal engine heard at the beginning.

My DAW is Pro Tools HD based, Sound Miner Pro and audio plugins such as iZotope RX, Soundtoys, Altiverb, Zynaptiq, Waves, audio resynthesis so^wares like Iris 2 and Harmor, as well as Wave Warper, Time Flux, Sound Particles and others.

Although I privilege the quality of a good and clean recording that allows me to customize my own sound without using tons of audio plugins chained together, I deﬁnitely love the many opportunities for sound design that come from the combination of some of the greatest plugins available in the market.

I dislike using templates, so I always look for creating something from scratch. And here it comes my preference for softwares like Reaktor, with which I build my own sound design tools.

I love also to experiment the manipulation of sound using hand tracking technologies like Leap Motion. I can’t forget to mention my two sources of immersive fun, Oculus Rift and Touch.

Of course, midi keyboards, Adam speakers, RMEs and the Avid Artist Mix are part of the set.

What are your favorite sound effects libraries?

There are a lot of great libraries on internet that I would suggest, but my favorites are for sure the ones created by Boom Library and Sound Morph. With these libraries I started to build my commercial set.

Also, there are tons of indie sound effects libraries of every kind, with which you can ﬁnd for your project the right sounds you were looking for.

I’m actually working on the feature ﬁlm called “Headlock”, written and directed by Mark Polish, starring Andy Garcia and Justin Bartha. It’s a futuristic spy thriller about a CIA agent that becomes seriously injured during a mission, surviving only on life support. As the details of the agent’s last mission unravel, the story shows that his accident was an inside job.

The movie is extremely intense for sound design and it requires a lot of narrative and creative skills to conceive the proper soundscape.

Do you have any tips for aspiring sound designers, on how to gain a foothold in the game audio industry?

My best suggestion is to make yourself known by getting in touch with audio professionals of the industry and start to work on any project. It is necessary to have an online portfolio and a demo able to show your creative and technical skills. An opportunity that can still be found is the internship program. If you get into it, you have the chance to do your best to gain reputation and experience.

It is important to have a good knowledge of recording techniques, DAWs and middleware softwares like Wwise, Unity and Unreal.

Most of all, have good and positive attitude towards yourself and people, it will determine your career from the beginning.

Daniele, thank you so much for taking the time and answering my questions! I wish you all the best for your future projects.

Thank you for giving me such a beautiful opportunity to share my experience.