In this review, we will be looking at the ambience library from Mindful Audio called Southern African Ambience. This library was created by George Vlad (interview) and Daan Hendriks (interview) while they were while attending the Sonic Mmabolela workshop, organized by renowned sound artists Francisco Lopez and Barbara Ellison. Let’s dive in.

Southern African Ambience features around 5 hours of ambient sounds recorded at 48 kHz and 24 bit. There are no specific categories or folders in which the sounds are arranged but the naming convention will tell you when and where the sounds were recorded. Time of the recordings varies, which is good because you get a lot of diversity from animal life. For instance, during the hot day, you will find occasional birdsong and at night, you will hear jackals in the distance. While we are in the subject of animals, I have to say that in this library you will find plenty of wildlife (mostly birds). From what I read from the description, the recording rig was left unattended which certainly shows as the recordings are really clean. I will get to that in a bit.

The quality of the recorded sounds is phenomenal. A special mention goes to the Baboons which are scary as hell. In one recording (just a small part of it), I wasn’t too sure if it was a human or a baboon due to its vocalization. Turns out, it’s a baboon.

The birds are fantastic. Plenty of usable sounds and easy to clean up if you want to dive deep into sound design. With just a quick process (stretch, pitch, EQ), you can create wonderful alarm sounds. If I had to nitpick, some files could be delivered at 96 kHz just because some birds are isolated enough to process them. But that’s really just nitpicking.

Now, the recordings seem really clean with occasional bumps here and there but you can’t really avoid that. The longevity of takes varies but most are over 5 minutes which is nice and useful. The shortest take is around 3:47 minutes long and the latter is a recording of an insect swarm.

Both, embedded BWAV and a separate file offer metadata. The data is fairly detailed and written in full sentences as opposed to one word. You also get a list of identified birds if you want to do more research later on. The naming convention is good with enough details to let you know what type of sound it is. Example of the naming convention: AMB – Southern Africa – Afternoon – Bush – Active Birdlife – STEREO

As always, I am providing pictures from Reaper, Soundly and Metadata Touch so that you can see for yourself. 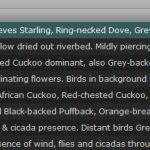 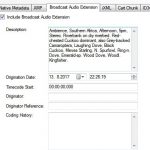 This example is a bit different from the rest, as this is the ambience library and is really hard to show its features in a 20 second video. So, I created a short animation and a montage of sounds. For a proper listen, you can also download a free file from Mindful Audio in stereo and surround format. All the sounds in the video are as they were recorded without any effects or EQ. Cross-fading had to be done in order to blend sounds.

For the price of $75 US dollars + VAT for the EU ($110 US for both stereo and surround), you get a decent variety of ambiences from Southern Africa and plenty of animal sounds you can extract from the takes (mostly birds). Metadata is well written and the whole library feels consistent and well put together.