Mission: JOY – Finding Happiness in Troubled Times, which made its world premiere at the 2021 Tribeca Film Festival in New York and which became available to the general public via U.S. television streaming channels Amazon, Vudu and iTunes in mid-June 2022, is a deeply moving and laugh-out-loud funny documentary in which His Holiness the Dalai Lama and Archbishop Desmond Tutu share science-backed wisdom about how people in the modern world can live with joy in troubled times. On June 2, 2022, the producers of the film presented a 48-hour free preview of the film on Facebook, hosted by celebrity activists including Cher, Richard Branson, Forest Whitaker, Gloria Estefan, Melissa McCarthy and Rosario Dawson. The project reached 108 million people globally before the preview was seen by 13 million people. When the film was released to the public the following week, it peaked at #3 on the iTunes documentary chart.

Regarding Dominic Messinger’s score for Mission: JOY, the film’s Director Louie Psihoyos, said, “Dominic’s masterful score rises to the challenge of celebrating the lives and friendship of our generation’s two greatest spiritual leaders.” Adds Co-Director Peggy Callahan, “I’ve been lucky enough to work with Dominic for decades. He is always great, but he was otherworldly on Mission: JOY.  Every detail was covered. He researched ancient melodies from Tibet and South Africa. Dominic found the correct instruments for an authentic sound and most of all he found the right artists and wrote soul-touching music. Did I mention he is lightning fast, easy to work with, and delivers on time? Who does that? Dominic!”

ABOUT THE CREATION OF THE SOUNDTRACK FOR MISSION: JOY:

Regarding his work on Mission: JOY, Messinger said, “There was a lot of planning and thought going into making this an authentic score. Usually a film composer’s number one job is to support the story and the director’s vision, but I believed it was equally important to be authentic. Rather than hiring Los Angeles-based session musicians who are arguably the best at playing any and every type of music in the universe, I wanted to collaborate with musicians and singers who’ve lived the story of South Africa and Tibet, and whose voices are, like the Holy Men, the Dalai Lama and Bishop Tutu, beacons of joy and hope for their countries and people. I’m so very grateful to have been given the opportunity to do just that! Working on a film about two global icons who are revered all over the world, and one directed and produced by a bunch of Oscar winners, has already created new interest in my music!”

While discussing the soundtrack’s stand-out tune, Messinger adds, “That Joy Song is perhaps the most interesting and challenging song I’ve ever written and produced – it features musicians and singers on five continents and five languages, creating music virtually, for a tune which somehow became a cohesive, joyful whole. These performers were able to make an impact within the film’s thematic storyline, since they lived through Apartheid and the Chinese invasion, often watching friends and family lose their lives in the struggle for freedom. What began as my idea to have Tibetans and South Africans singing and chanting in a call and response type format gradually developed into a tune that featured an Afro-beat intro, then morphing into an American-styled pop song. My goal was to have these performers sing in their own styles and languages, recording lyrics and melodies that I hoped and prayed I’d later be able to cut, copy, and paste together into an inspirational song that made sense. Based on the stellar reaction to the tune and the entire soundtrack, I’m just thrilled that my contributions to this project were so very well received!”

ABOUT THE DOCUMENTARY MISSION: JOY:

For Mission: JOY – Finding Happiness in Troubled Times, Academy Award®-winning director Louie Psihoyos teamed up with co-director Peggy Callahan to produce a documentary with unprecedented access to the unlikely friendship of two international icons who transcend religion: His Holiness the Dalai Lama & Archbishop Tutu. In their final joint mission, these self-described mischievous brothers gave a master class in how to create joy in a world that was never easy for them. They offer neuroscience-backed wisdom to help each of us live with more joy, despite circumstances. In addition to Psihovos, other Oscar winners on the film’s production team include Producer Mark Monroe, Editor Andrew Buckland and Animator Darla Anderson.

Inspired by the New York Times bestseller The Book of Joy: Lasting Happiness in a Changing World, written by the Dalai Lama, Archbishop Desmond Tutu and Doug Abrams, the film showcases the exchange between these two Nobel Peace Prize winners that led to that book. Consisting largely of never-before-seen footage shot over five days at the Dalai Lama’s residence in Dharamsala, the film invites viewers to join these luminaries behind the scenes as they recount stories from their lives, each having lived through periods of incredible difficulty and strife. With genuine affection, mutual respect and a healthy dose of teasing, these unlikely friends impart lessons gleaned from lived experience, ancient traditions, and the latest cutting-edge science regarding how to live with joy in the face of all of life’s challenges from the extraordinary to the mundane. Mission: JOY is an antidote for our modern times.

Dominic Messinger is a music composer, songwriter, and the recipient of 15 Emmy Awards and 12 BMI TV Music Awards. Known for conducting painstaking research regarding which musical styles and instruments were used at specific times in history, in specific regions of the world, Messinger then tracks down the instruments native to each region and brings together musicians and singers who interpret his musical compositions, adding depth to every scene of a film. The soundtrack for the documentary film Mission: JOY marks Messinger’s latest project, with a score that features musicians, singers, and orchestras from five continents. 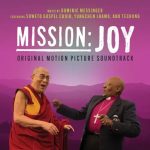