German sample library developer Sonuscore just recently released a brand-new product: Lyrical Cello Phrases – a virtual phrase-based solo cello instrument. Not only including over 70 pre-recorded phrases but also a solo cello legato patch, this library could be a potentially helpful tool for adding realism and orchestral authenticity to your productions.
Let’s find out together, what Sonuscore’s Lyrical Cello has got in store for us.

As mentioned before, Lyrical Cello phrases features a set of pre-recorded solo cello phrases, performed by Matyas Oelveti in Budapest, Hungary. Apart form the phrases, you’re also provided with a separate legato patch so you can lay down your own melody lines. Regarding the phrases, the term “lyrical” is really to be taken seriously here. Each set of phrases contains beautifully soaring and sometimes plaintive cello performances that are very suitable for scoring dramatic scenes.
Just think of the oftentimes cello-based soundtrack from the Game Of Thrones TV series and you’ll know immediately, where this library is heading towards sonically.

Lyrical Cello Phrases comes as a downloadable Kontakt-based instrument and is around 3GB in size. Like with most Kontakt libraries, the installation procedure is pretty straightforward. After unzipping the downloaded file, in order to use Lyrical Cello Phrases you’d just have to load one of the two instrument patches into Kontakt – either via the Files tab or by simply dragging and dropping a NKI file into Kontakt’s instrument window. Please not that you’ll need a full version of Kontakt 5.6.0 or higher to use this libary. It won’t work with the free version of Kontakt.

The interface of the cello phrases patch is designed enjoyably simple and only display a handful of features, letting you focus on sound rather than on tweaking. The central element of the main page is a so-called theme selection bar, including all the phrases available, sorted into 12 different thematic sets. After each theme name, including such inspirational labels like “Lament for the Fallen” or “King’s Honor”, you’ll find information regarding the harmonic scale of the phrase. While most phrases are in minor or major, you’ll also find some interesting, more unusual scales like Lydian, Dorian or even an “Ethnic” scale. 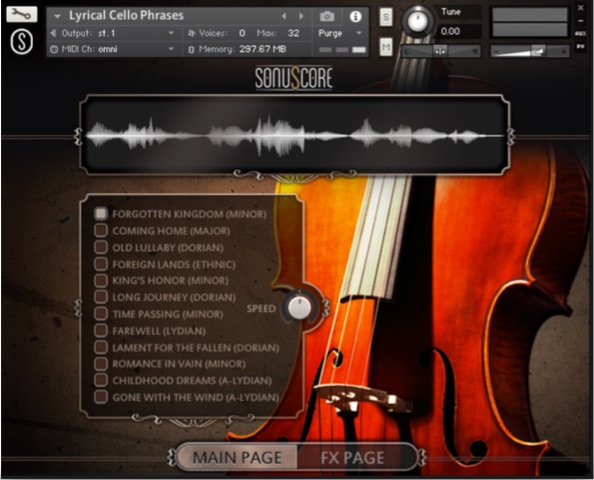 Each theme consists of five phrases, which can either be played as a whole or partially. Above the five keyswitches that are assigned to playing complete phrases (C1-G1), you’ll find various blocks of keyswitches, to trigger either the intro, middle part or ending of a phrase.

This layout allows you to combine various parts of different phrases with each other so you can create your very own phrases. Each keyswitch range (including the range for a complete phrase playback) features two additional short endings that provide you with a nice conclusion of your phrase and takes you back to the root note. Speaking of root notes: Each of the over 70 total phrases is recorded diatonically, allowing you to play a phrase in any key you like and even letting you switch root keys in between two parts of a phrase. This is a tremendously useful feature to follow the chord progressions of your track with the cello.

Next to the theme selection bar, you’ll find a speed control, allowing you to seamlessly adjust the playback speed of your phrases, from 50% to 150% of the original tempo. In my opinion, a control with fixed speed options like half time or double time would have made more sense here since 78% speed doesn’t really give you any useful information about the playback.

At the top of the phrases main page, you’re provided with a visual representation of the phrase you’re currently triggering which also shows you which position you’re at within the phrase.
Switching from the main page to the FX page via the buttons at the bottom of the library’s interface navigates you to the mandatory effects panel, including reverb and delay, as well as a basic, 4-band EQ. 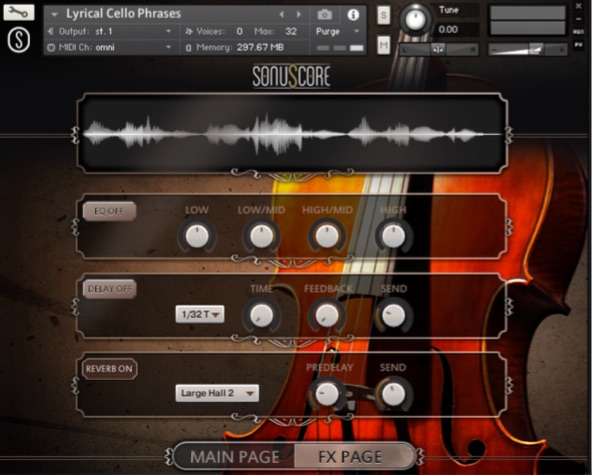 Next, we’re heading over to the Legato Patch. Here, too, you’re given only the most important control options incorporated into a minimalist interface. At the front page, you have access to the same three effects like before as well as an articulation switch at the bottom. It allows you to choose between a more expressive, long legato and a shorter legato for faster passages. As far as I was able to hear, the type of legato refers to the length of the transition between notes. Although the legato patch allows you to play quite smooth, expressive lines, you don’t hear any noticeable transition sounds between the notes compared to the striking portamento transitions you get with Cinesamples’ Tina Guo Legato, for example. However, depending on the situation, a less flamboyant legato sound might be just the right thing for you. 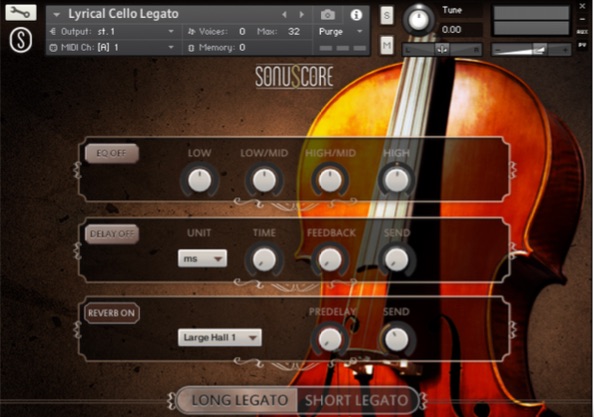 Although the patch is meant to be played legato – meaning monophonic – the instrument lets you play polyphonically, allowing you to hold chords for example. Since I’m quite sure that Lyrical Cello’s Legato patch doesn’t come with a polyphonic legato engine, I’d say it’s a basic sustain patch rather than a legato instrument.
Therefore, Lyrical Cello’s Legato instrument, for me, feels more like an additional bonus feature than a completely distinct patch.

The sound of an instrument as complex as a cello is not only very hard to capture, but it also needs a masterful performer to tickle out even the last bit of detail and expression. Both preconditions were fulfilled exceptionally well by Sonuscore and cellist Mátyás Ölveti. Throughout all the phrases, the cello sounds warm, pure and very emotional. Each note is played expressively and the lyrical nature of the phrases chosen, opens up a wide range of possible applications, be it in a dramatic underscore or as a solo part of an epic soundtrack.

With a plethora of beautifully performed phrases and melodies, Sonuscore’s Lyrical Cello really gets you one step closer to working with a world-class session cellist. Being able to combine parts of different phrases with each other and thereby making them your own really boosts creativity as well as productivity. Playing through the various phrases immediately evoked cinematic scenes before my inner eye and sparked instant inspiration. The simplistic design of the library’s interface affects the playability and ease of use a lot and allows you to focus on the sound of the instrument.

Personally, I wouldn’t have needed another basic cello legato patch, but seeing it as a bonus to the remarkable main part of the library, the phrases patch, makes for a nice addition.
Especially for situations, where you need your sample-based production to sound most realistic and authentic, I’d recommend adding Lyrical Cello Phrases to your arsenal, particularly for a price tag below a hundred bucks.
Lyrical Cello phrases is currently available with an introductory price of €74.25 ($82.00). After the introductory phase, it will cost €99.00 ($109.00).