Search
Home
ReviewsSoftware and other reviews

Today I’ll be reviewing Softube‘s brand-new plugin bundle Volume 1, which contains 16 of the Swedish developer’s most acclaimed products. A lot of the processors included are based on and modeled after elusive (vintage) hardware gear, a discipline Softube is well known for. Volume 1 is designed as a complete plugin suite for composing, mixing and recording, including a host of different EQs, compressors, effects, amp simulators and reverbs. Additionally, Volume 1 features Softube’s very own modular soft synth Modular, as well as their popular virtual drum machine Heartbeat.
Together with your purchase, you get a 90-minute training video from PureMix, teaching you the plugins’ most essential application possibilities on a real-life mix session. The course is hosted by Grammy nominated engineer Ryan West (Jay-Z, Eminem, Kanye West).

All those plugins combined should fulfill just about every mixing task you might come up with, so let’s find out together how much of an asset Volume 1 turns out to be.

Like mentioned before, Volume 1 comes with 16 plugins from 7 different processor categories as listed below:

About 90% of the processors included are modeled after real-life, hardware counterparts and are officially approved and licensed by the according original companies like Drawmer, Trident or Summit Audio. Some of the remaining plugins have no specific brand name connected to them, however their sound, GUI and control options give enough clues on what the hardware role model was. The FET Compressor for example, is clearly modeled after on of the most iconic hardware compressors – the Universal Audio 1176. However, it features additional controls, like a parallel processing option in this case, which the hardware counterpart doesn’t offer.
Compared to your bread-and-butter stock plugins, with this bundle Softube rather aims for an analogue, vibey feel that only few stock plugins aren’t able to convey. Since none of the individual plugins included are brand-new and for the most part already reviewed quite often by now, I’ll not go into detail on each and every one, but rather evaluate the bundle as a whole. Nonetheless, to give you a quick jump start on what the plugins do, I assembled a very brief roundup below:

After the purchase of Volume 1, you’ll get an email from Softube including a step-by-step walkthrough on how to download and activate the product.
Softube’s Volume 1 bundle can be downloaded via Gobbler, one of the leading download and plugin subscription managers. After creating a Gobbler account and downloading the manager, you can log into your account and start downloading the available products. If you already have a Softube account, you can alternatively create a Gobbler account using your Softube account details.
Please note, in order to use the plugin bundle, you need a valid iLok account.
After the installation, upon loading up any of the Softube plugins, you’ll be asked to activate your license using the iLok License Manager. Simply paste in the authorization code and account details and you should be good to go.

THE BUNDLE IN USE

According to the developer, Volume 1 provides you with all the tools you need to professionally mix and produce a track. And really, at first glance it seems like there is a suitable processer included for most mixing tasks. However, since every DAW now comes with its own, complete palette of professional sounding stock processors and FX, why would you really need another one?

The answer to this question came to me quite quickly, after fiddling around with all the plugins for a bit and testing them on a mix I had finished before using almost only stock plugins.
Compared to the stock processors, the Softube plugins felt more alive and analogue – even if this term is being used inflationary recently. Not only were I able to get my head around most plugins more quickly, but I felt like they all added a certain type of warmth and texture to my audio material. While the difference was not that big on a single channel, this analogue vibe added up among the sum of tracks and led everything to sound like it was mixed on a big console.

Since most of the bundle’s plugins include some sort of saturation, it was easier to feature certain instruments without even reaching for an EQ. Since the saturation obviously sounded more pleasing to the ears than digital distortion, I could be a bit more courageous with its use and ended up using a touch of it on practically every track. While analog saturation tends to round off sharp transients and introduces its own type of compression, the mix got together remarkably quicker and sounded solid even in earlier stages. 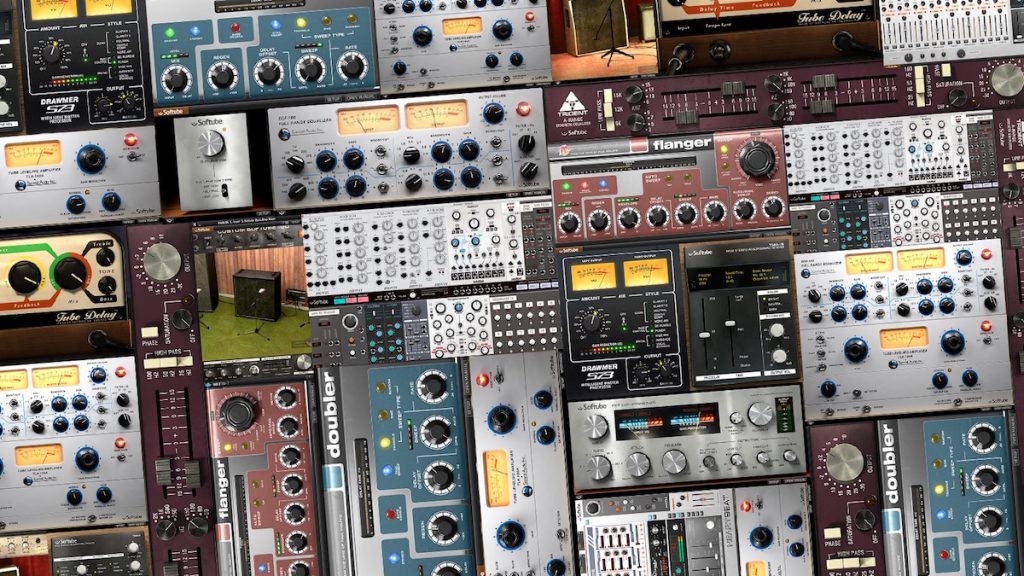 I also found myself using the Summit Audio channel strip or one of its modules on almost any track because even when using subtle settings it did something to the signal that made it sound better. Again, spread across many tracks it really made a perceivable sonic difference.

Although the TSAR reverb units are also able to generate huge, sound design-y types of hall, I found they really do shine with natural ambiences. With the right send amount, drum rooms, acoustic guitar ambiences and vocal plates could rather be felt than heard, but still added a lot of three-dimensionality and space to the signal.

Lastly, I really fell in love with the Drawmer S73 mastering processor. With its 10 pre-configured style settings, an air switch that seems to work as an exciter and a simple amount control, it was a breeze to use. The S73 works like a ‘better-switch’, enhancing the quality of most signals effortlessly. Its big strength, however, lies in using it as a submix processor. Switched on, it seems to tidy up your low frequencies, declutters the mids and adds a pleasant sheen to the highs. Through its compression circuits, the S73 solidifies a mix without killing the transients. The only danger I tapped into, was that I constantly kept dialing up the processing amount at first since I liked some much what it was doing without noticing that at some point the mix sounded just over-processed. This is a common pitfall I encountered with exciters, too. My solution for this was to dial back the processing amount to zero and then slowly turning it back up until I was able to hear the difference. Dialing it back a tad from this position yielded the best results.

Added to every purchase of Volume 1 is a 90-minute long tutorial course hosted by Ryan West, engineer for Jay-Z, Eminem, Kanye West, just to name a few. You can activate and download it from your Softube account, but in order to watch it, you’ll need to create a free account on PureMix.com.
With the aid of a pop/soul mix, Ryan shows you typical applications for every plugin and quickly goes about each processor’s functions. Since he keeps on A/B-ing the signals with the plugin(s) turned on and off, you can easily learn for yourself, what the processors are doing to the signal exactly.
Although this course is more aimed at beginners and the basic functions of processors, professionals, too, will also benefit from it and if it’s just for seeing a Grammy-nominated engineer at work.

I found it quite helpful to watch the course before testing out the plugins myself since I was taught the most important controls on the fly and could spare myself reading the manual. When I eventually loaded up the plugins in my DAW, I was able to control them without any problems from the get-go.

Softube’s Volume 1 plugin bundle is an enrichment for everyone who is looking for a complete set of production tools with an analogue feel to them. Most of the processors included are very easy to use and provide you with a good sound right from the beginning. Through the analogue design and saturation options, you can push most of the plugins a bit beyond where you’d normally go without receiving hard clipping and ugly distortion. Of course since the plugins still live in the digital world, this will only work within a certain limit. If used correctly however, you can use almost any processor to add texture and solidity to your audio material.

Adding a synthesizer and a drum machine to the equasion was a smart move on the part of Softube since it opens up Volume 1’s field of applications to producers and composers, too.

The attached, free tutorial is a really helpful addition to the package since it not only provides you with some basic knowledge of each plugin, but it also teaches you some essential mixing tips from an internationally successful engineer.

If I had to look for a downside (which I in fact do), it would be that Softube still hasn’t managed to provide their plugins with their own, independent preset managers instead of using your host DAW’s one. I already went over this issue in my review of Softube’s Modular and hope to see this being updated in the future.
Certainly, if you’re looking for surgically precise EQs and perfectly clean compressors, this might not be the right thing for you, but for anyone who’s trying to infuse some vintage goodness to his/her tracks, you’re definitely won’t go wrong here.

All in all, for $399.00 you’re given a complete toolbox of processors with a vivid and vibey feel that takes you back to the good ol’ days of analogue gear and big mixing consoles. Adding the regular price of each of the 16 included plugins together results in a value of over $2000.00, which is quite a drastic difference in my opinion.
However, if you don’t want to pay the full price upfront, Softube also offers monthly and yearly subscriptions for Volume 1, with a pricing of $19.00 for the monthly option and $199.00 for the 12-month version. If you already own one or some of the plugins included, you could also make use of one of the many upgrade options from within your Softube account.

One last, important note: Softube will keep adding new plugins to the Volume 1 bundle with no additional costs for subscribers or owners of the bundle.