Swedish developer Softube, well-known for their accurate software emulations of popular studio equipment, recently broke new ground with their own take on a modular software synth, called Modular. Building upon its hardware counterpart Eurorack, the modular approach enables users, to create their very own, completely unique synthesizers and sounds by combining a wealth of different synth modules.

Ever since the product’s release in summer 2016, the catalogue of modules is constantly expanding and with licensed hardware emulations of popular synth brands like Doepfer and Intellijel on their side, Softube promises to deliver an authentic modular synthesis experience – just like you’d be patching and turning knobs on the original.

On occasion of Softube’s release of two new utility modules – Dual X-Fade and Dual Pan – we were provided with a review version of Modular, to find out, if the product lives up to expectations.

For anybody, who is new to modular synthesis, I’d like to quickly outline the topic to clarify things later in the review. Although having its modest beginnings already in the 1960s, it was not until the 1990s that modular synthesis became widely popular and affordable for home studio producers. This is attributed to the introduction of the Eurorack standard by audio hardware manufacturer Doepfer. This standard allowed users, to build and combine their own, rack-mounted combinations of synthesizer modules. Through the established technical standard, other synthesizer manufacturers were able to build and produce synth modules, that would work seamlessly alongside the original Doepfer modules. Over time, more and more modules were built for the Eurorack system by various developers, so that today, there is an almost uncountable amount of products available for modular synthesis enthusiasts. Modular synthesis is the combination of different sound and control modules, which, in contrast to a normal synthesizer, can be arranged and connected almost unrestrictedly. This is made possible by several inputs and outputs on the modules themselves, which can be connected by 3.5mm patch cables.

Some composers may know the look of a (ridiculously huge) Eurorack system from pictures of film composer Hans Zimmer’s studio: 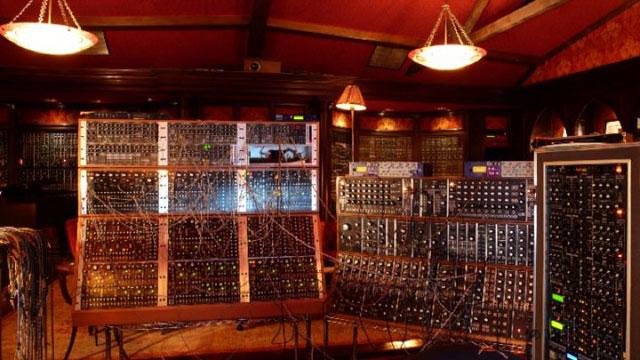 Now, as you might guess, modular synthesis is an undertaking, that can quickly grow quite expensive, space-filling and power-consumptive (meaning electrical power). Therefore, Softube took the Eurorack idea and transferred it into the digital realm to make hardware-like modular synthesis available for anybody from within the DAW.

By default, Modular comes with six modules modeled after Doepfer’s hardware A-100 system:

In addition to that, you get a wealth of different utility modules, sequencers, midi controllers and performance modules. On top, if you already bought it before, you’re provided with Softube’s classic drum synthesizer Heartbeat in Eurorack module form. Here’s an overview of the Softube modules included:

Additionally to the modules listed above, you can expand your selection with three original circuit models by Intellijel. Like the Doepfer modules, these are painstakingly emulated versions of the original hardware. Similar to the ever-expanding original Eurorack catalogue, Softube announced to continue releasing new software modules in the future.

The included manual doesn’t focus on Modular only, but is in fact a compendium of all of Softube’s product manuals. While this makes it quite a huge tome, you’ll quickly find the things you’re looking for by clicking on the designated links in the table of contents.

One important thing to note: For both the demo and the full version, you’ll need a verified iLok account to activate the product. However, you don’t have to buy an iLok dongle though, since Modular will work with an iLok license stored on your computer.

Opening up Modular in your DAW will result in a very familiar look, given that you’ve already had the chance to look at a hardware Eurorack. The interface resembles an empty rack casing, to which you can add modules at will. To be more precise, Modular features two racks which can hold 50 modules each. These can of course be connected across the racks. The buttons, switches, knobs, in- and outputs located in between the two racks are pretty straightforward. First from the left, you’ll find three buttons to add, remove/delete and edit modules. With the Perform Edit button, you can assign Performance modules to various controls of your synth. Right beside it, there are the main outputs to which you’d connect the audio output of your synth. The volume knob and output level meters should be pretty self-explanatory. The eight aux outputs can be used to route signals to separate outputs for further processing.

Back to the far left, if you click on the Add Button, you’ll get an overview of all the modules available to you. A mouse-click on one of the modules will add it to the rack. You can also add multiple modules at once by holding down the Shift key.

To connect modules with each other, you click and hold on a module’s connector and drag the virtual cable to another. Modular simplifies this task even further by showing you possible connections via color-coding. When you patch from an output, all possible inputs will turn green. Consequently, patching from an input, all possible output connections will turn red. Please note that while you can connect one output to multiple inputs, this doesn’t work the other way around. One input can only receive one signal at a time. To remove a connection, you’d just click on the connected in- or output and drag the patch cord away from it. The patch cords themselves are color-coded, too, to help you reconstruct your connections.

Moving the mouse slider away from the connector, the patch cords will fade away to provide you with a more organized look. 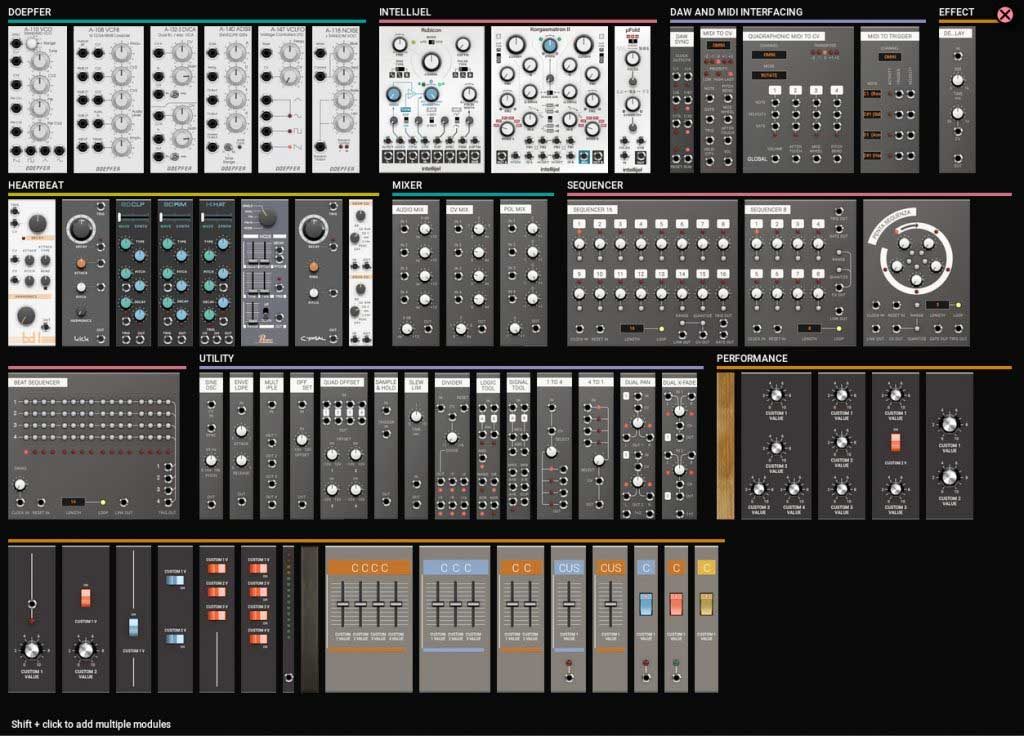 One thing, that irritated me a bit was the fact that you can’t change the arrangement of modules by clicking and dragging them to another position. This is, what I intuitively tried to do, since I grew accustomed to this feature from Native Instruments’ Reaktor. In order to change your modules setup in Modular, you’d have to first click on the Move/Delete button, click on one module and then click again onto a free space you want it to move to. This makes quickly changing a setup quite complicated and unintuitively in my opinion.

Another feature, that is critically discussed on forums and really bothered me, is Softube’s preset management philosophy on Modular. Instead of having its own preset manager, Module relies on your DAW’s preset manager. This is very unusual with modern plugins and synths in particular, since it prevents you from using your own presets in different DAWs. If you created a nice patch – say – in Logic Pro, and wanted to use it in a Cubase arrangement, you’d simply wonuldn’t be able to, since the preset is stored as a Logic-specific file. I think this issue really needs to be addressed.

This leads us to the sound of Modular. Now, apart from the preset management issue I talked about above, the factory presets themselves, which are provided with Modular, just sound fantastic. They give a nice overview of how widespread the sonic possibilities of Modular are. Especially if you’re just starting out with modular synthesis, the factory presets provide a lot of value and some good starting points to delve deeper into the topic. I had lots of fun tweaking and modifying some factory presets and eventually coming up with my own (sometimes weird sounding) patches. The manual provides you with some nice starting points and connection options for different applications, so make sure to give it a read. If you’re used to Euroracks and modular synthesis, though, you may not need any presets and want to start from a blank page to create something entirely unique.

One thing is certain, in Modular you can really hear Softube’s experience and precision in modeling hardware. Although I had no hardware counterparts available for comparison at the time of my review, I could instantly recognize the sound and behavior of the original models. The VCOs and VCFs sounded fat, punchy and organic, and with the sequencer models I was able to create these typical, bubbling modular synth lines in no time.

The sounds and modules of Modular invite to make sonic experiments off the beaten path. A lot of the magic of modular synthesis lies in not knowing how the end result will sound. You try different connections and arrangements, patch this cord there, turn that switch on and all over sudden, you’re rewarded with a tone, you never thought you’d be able to create.

Find some audio examples below:

Up to date, Modular is without a doubt one of the most flexible and customizable modular soft synths on the market. On top of that, it emulates its hardware counterparts very authentically and with its design and visuals, gets quite close to the real thing. Surely, one thing it can’t emulate, though, is conveying the sensation of turning real pots with both hands, touching switches and sliders. However, if you’re on a mobile setup or just don’t want to carry your heavy Eurorack with you all the time, this might just be the thing for you. The sound is fantastic and doesn’t have to fear the comparison to the hardware. One thing to note though, is that the precise emulation doesn’t come for free. Modular puts quite a heavy load on your CPU, so you might want to plan ahead.

Like I said before, Modular is made for users, who love to experiment with sound and synthesis. If you’re more the preset-wielding type of guy/gal, there are certainly better options for you out there.

If, however, you’re interested to delve deeper into modular synthesis and are looking for an affordable alternative to the hardware, there simply isn’t a way around Softube’s Modular with its superb sounding modules.

For a fair price of $99 and lots of expansion options to come, Modular provides sound tinkerers with anything they need to create unique sounding synth patches.