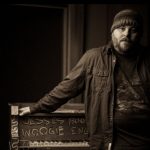 Tell us a little bit about yourself and how did you get your start as a composer?

I grew up a gamer child of the 80s, “Asteroids” on the Atari 2600, a Nintendo in my bedroom, and plenty of quarters dropped in the arcades of suburban Philadelphia. But I was also a musician. My dad bought me a Yamaha DX11 when I was 11 and it wasn’t long before I was digging into the manual and trying to create my own synth patches. I did the band thing through my teens and early 20s; except that while everyone else was playing grunge, my friends and I were doing Rush and Yes covers and writing our own prog rock. I really dug that cinematic approach to a typically cinematic instruments.

By college, I decided to major in film scoring. One day, I had an epiphany: I realized that every day I’d go to school, study film scoring, come home and do my film scoring assignments, and then when I had free time, I’d play games on my Playstation. I decided that someone out there had to be writing music for the medium I loved so much, so I decided to apply what I was learning from film scoring to game scoring. Through perseverance and luck, I ended up co-scoring a Playstation game for Sony as my senior year composition final project. I’ve been off and running ever since then.

What can you tell us about Mafia 3 coming out in the Fall?

Mafia III is the latest game in the open-world Mafia franchise from 2K and TakeTwo Interactive Software, Inc’a new studio, Hangar 13. It’s the story of Lincoln Clay, a Vietnam War vet who returns home to some big changes in 1968’s New Bordeaux, an eclectic bayou side city inspired by New Orleans. It’s a crime story and a family story set amongst one of the most turbulent times in American history. The game releases on October 7 for PC, Xbox One, and PS4. The game’s original score was composed by myself and Jim Bonney.

Are you almost finished scored Mafia 3 or where are you at?

We’re done! It’s been a long process. I started working with Hangar 13’s Audio Lead Matt Bauer two and a half years ago. We started out knowing the time period of the game and the tone of the game, but the direction the original score could go in wasn’t as clear. We did a lot of experimentation and musical concept work for about a year. In July of last year, Jim Bonney joined the project and we split the score between us. Jim tackled all of the interactive combat music for the game while I scored all of the cinematic and thematic cut scenes for Mafia III. The last part of the whole process we just put to bed. That was editing together both the digital iTunes and vinyl versions of the game’s soundtrack.

If you could describe your Mafia 3 score in a few words what would they be?

Dirty, cinematic blues. It might seem obvious to say that the score for a game set in a 1960’s New Orleans analog is a blues score, but it took some discovery to find the right path and the right tone. The blues is so rich and vibrant and so many people have experimented with it for decades, that it was a challenge to find the right signature take for our game. Get the song structure wrong and it feels more like a 1960s song score. Get the guitar reverb wrong and it suddenly sounds like you’re scoring a 1980s cop drama. The way I approached writing my cues for the game was to take traditional blues instruments – acoustic and electric guitar, dobro, drums, upright bass, upright and electric piano – and bend them into a cinematic approach. I couldn’t use a big sweeping violin section to score the pathos of a scene, so I would use things like hammond organ and bowed piano. 12 bar blues not properly adding the right emotional weight to a scene? Try a bluesy dirge like those of John Lee Hooker or Steve Earle, but using the leitmotif approach to composition so common to film scores.

You have scored 3 Star Wars: The Old Republic games. How do you keep each game score new and fresh?

Well, technically it’s just one big game. Star Wars: The Old Republic is EA/Bioware’s big Star Wars Massive Multiplayer Online game. The original game launched in 2011, and it has had a number of large expansions released for it since then. At this point, I’ve worked on the game for over 8 years. That’s a significant chunk of my 17 year game career. So, yes. Keeping each new expansion fresh is one of the specific creative challenges faced each time we start working on another batch of music. Thankfully, Star Wars music is a well-known quantity. John Williams’ Star Wars scores are arguably the greatest film scores ever written. So, there’s a road map of sorts. I know that I’m going to have to define new characters and planets with new themes, and those themes will need to have their own signature instruments to help define who they are and what purpose they serve in the score.

Are you a fan of the Star Wars films? Have you tried to incorporate any of the film’s familiar sounds into your score?

Unquestionably. I’m a Gen-X kid of the late 70s and 80s, the perfect age for Star Wars when it hit. I collected the toys, read the books, had the soundtracks, all of that before I ever went to work for Lucasfilm. So, when I start to work on a Star Wars project, I absolutely come to it with an air of reverence for the source material. And as such, I definitely work towards incorporating familiar elements of the Williams scores into the new material, even if they’re abstracted a few levels or twisted in new directions. For instance, there’s a new theme in Knights of the Eternal Throne. As reference for it, we used the Emperor’s theme from Return of the Jedi. But I didn’t want to just quote that, so I distilled it down to what made it work: minor key, dirge-like vocals, focus on diminished intervals. I then took those ideas, applied them to a new piece of music, switched the choir from men’s choir to women’s choir, and now it feels related, but fresh.

You have been scoring video games for over 10 years now. What is the biggest change the industry has seen during that time?

17 years and counting. It’s tough to say if the biggest change is the birth of the mobile industry or the birth of the indie scene. Both have been titanic shifts in the industry. The most skilled franchises are the ones that manage to scale up and down from AAA console games to mobile experiences, and not every franchise can do that. With the indie scene, there’s now finally a way for people to enter the industry and experiment without it having to cost hundreds of thousands or millions of dollars to do so. One of the things that isn’t talked about much outside of the game industry, but is an enormous change is the standardization of tool sets. When I started, every game company had its own engine, its own propriety tech, its own software to run every element of the game. Now, people can spend time perfecting their use of Unity or the Unreal engine or Wwise instead of trying to invent game tech while also inventing the game.

What has been your favorite project to work on and why?

I’ve been lucky to work on a number of really fun projects. Most recently, Mafia III was a blast to get to explore. After 10 years at Lucasfilm with Star Wars and Indiana Jones projects, it was a real treat to get to explore something bluesy, jazzy, dirty and gritty. I got to try some really exciting things with orchestration and arrangement that I wouldn’t have been able to do before. And the team was really receptive to all of it and encouraging. Those are the kinds of projects you hope to get, and you love them as you get to work on them.

What types or programs do you work with?

I’m a Logic Pro X user. Have been a Logic user since the days of emagic and Logic 2.0. Other than that, it’s a large number of sample libraries. Cinesamples, Spitfire, Eastwest, 8dio, etc. plus a ton of little boutique libraries. Other than that, I use Sound Forge for my file prep and delivery: editing the tops and tails of files, editing cues into seamless loops, mastering. That kind of thing.

Be a nice person to work with. Time and again in this industry, I’ve seen people who were exceptionally talented be passed up for people who might not be as gifted but were pleasant to work with. In games, you end up working long, grueling hours with people. They want to know that you’ll be pleasant to be around when the going gets tough.

I’m recording music for the just announced Star Wars: The Old Republic expansion called Knights of the Eternal Throne. That’s been fun, and we headed to Nashville to record with a live orchestra at the end of July. Other than that, I can’t mention the projects I’m working on, because they haven’t been announced yet. They are, however, all VR projects. I’m really enjoying getting to explore the VR space and see what’s possible with that medium.

In this interview, we talk to composer Brandon Roberts about his work on Unbroken: Path to Redemption - An unbelievable true story of Olympian and World War II hero Louis Zamperini. END_OF_DOCUMENT_TOKEN_TO_BE_REPLACED

In this interview, we talk to composer Kurt Oldman about his work on a SuperMansion series and also touch on his past work. END_OF_DOCUMENT_TOKEN_TO_BE_REPLACED

In this interview, we talk to Gaayatri Kaundinya about her work as a composer and singer on The Hundred Foot Journey, Jungle Book and Million Dollar Arm. END_OF_DOCUMENT_TOKEN_TO_BE_REPLACED