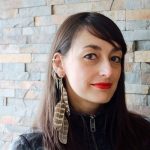 Hi Anne, thank you for taking time to do this interview. Let us start with the basic questions first. Tell us a little bit about yourself and how did you get your start as a composer?

I’ve been making music since I was a little kid. My Dad had a tape recorder lying around the house that I would sing into, and I invented my own way of notating music on the page before I could read music properly. I spent a lot of my teenage years in my bedroom with my guitar, keyboard… and that tape recorder! I studied Composition at McGill University in Montreal, where I embraced avant-garde music. I then moved to London where I studied Music for Screen at the Royal College of Music. After that I thought I would land my dream job of writing music to picture, but it took many years before that would happen. It was a difficult time trying to get a commission and it took a lot of patience and strong-will to keep going. My luck changed when I won a BBC New TV Composer competition. The prize was to score an episode of their landmark David Attenborough series “Natural World.” After that, the “snowball effect” happened and I’ve been working as media composer ever since.

How did you get involved with American Animals, which will premier in Sundance?

Bart Layton, the director of American Animals, directed a film that I scored some years ago called “The Imposter.” Bart brought most of his team back for “American Animals,” so it was a nice reunion.

I prepared by hopping on board very early on. Bart was sending me versions of the script to read even before it was finalized. It was such a vibrant and absorbing script that I felt immediately inspired to create a series of demos well before the shoot began. Some of the tracks were eventually thrown out, but some were developed into the main themes. So it was a fruitful exercise.

The scoring process was a challenge because there are so many layers to the film – firstly there are a wide variety of emotions, meanings, and pace, as well as four very strong characters that the music has to support and represent. Then there’s the nod to other movies (specific genres, directors and composers) – “American Animals” is “a movie within a movie,” so the score has to play along with this idea.

To add to the complexity, the film itself is a new hybrid genre – as it’s a drama that incorporates documentary elements (a ‘Bart Layton speciality’ pushed to the limit!). I was facing similar challenges to the editor – how to smoothly transition in and out of the documentary world without disturbing the plot or jolting the audience from the drama.

The overall challenge with the music was to ensure that the score did not sound disparate and “bitty”, but could tie all of these complex elements together to create a homogenous sounding score.

American Animals follows the story of four young men who mistake their lives for a movie and attempt one of the most audacious heists in U.S. history. Did you make a theme for each character or have you found another solution to show their presence in the film?

Each character is introduced with a track that we felt best summarizes them – in a playful, caricature kind of way. The real themes emerge from what they actually do, who they are underneath, and where they lead us. For example there’s a “planning theme” for the character who appears to be the instigator of the heist – this theme develops as the plot thickens. Then there’s an “art” theme to represent the need for something deeper in life. And so on… 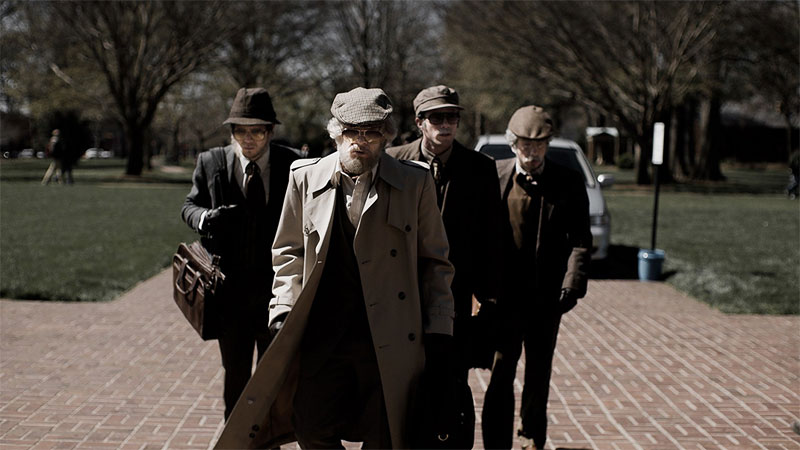 What range of emotions did you have to portray in the movie and could you share a short tip or a hint of how one could achieve different emotions with music?

I had to score a wide range of emotions in “American Animals” – it flits between humor, drama and suffocating tension. Music is such a powerful tool in creating emotion in film, so the composer has to be very careful that they are pitching it right. My tip would be to get to know the film, watch the scene closely, discuss with the director what that scene is supposed to be telling us. Ultimately you have to use your instinct – when you’ve finished scoring a scene and are watching it back, are you feeling it? I’ve also found that emotions are quite subjective: my version of happy might sound sad to someone else!
Of course there are also “technical” ways of creating different emotions through instrumentation, tempo, keys, etc.

You also worked on The Imposter which I think was a beautifully made film. How did you get involved with the project and what would you say was the most difficult part of making the score for The Imposter?

Bart runs a production company called “Raw,” where I got some of my first commissions – namely to work on their original series “Locked Up Abroad,” now in its twelfth year. Bart liked the music I was writing for “Raw” and asked me to work with him on “The Imposter.”

It was a challenging film – again, making sure the transitions between documentary and drama were done smoothly. We wanted the music to be scored like a drama, but to make sure it was not too overbearing so that the film could maintain its documentary roots.

I have to say I do love shiny flashing lights, but I’m not too much of a gearhead and have a very embarrassingly basic setup! I use Logic. I know I will get a lot of grief if I say this out loud, but I use a lot of Logic’s internal plugins (in addition to some UAD and Wave stuff). I have a big collection of instruments from my travels that I like to sample. I’m also a big fan of Spitfire libraries. I recently bought a Prophet 6 synth, which I used on “American Animals” – it’s beautiful to look at and it rocks!

If you had any advice for female composers starting off in the business what would it be?

My advice would be to consider yourself as a “composer” rather than a “female composer”. What I’m keen to promote is a working environment in which gender is irrelevant. I’ve been fortunate in the U.K. that I have not come across any prejudice that I’m aware of.

The only hurdle I’ve had to overcome on one or two occasions is proving that I – as a woman – can write action music. Which I find quite amusing!
Particularly for female composers I would say confidence is key – try to be confident in meetings, in your writing, and when negotiating contracts, and surround yourself with other composers – male and female. Composers are some of my closest friends and allies. Go out for drinks, share your war wounds, learn from each other, and even collaborate. You need each other in this crazy business!

I have started working on a couple of “true-crime” series for Netflix. But that’s all I can say about those at this stage!

In this interview, we talk to composer Brandon Roberts about his work on Unbroken: Path to Redemption - An unbelievable true story of Olympian and World War II hero Louis Zamperini. END_OF_DOCUMENT_TOKEN_TO_BE_REPLACED

In this interview, we talk to composer Kurt Oldman about his work on a SuperMansion series and also touch on his past work. END_OF_DOCUMENT_TOKEN_TO_BE_REPLACED

In this interview, we talk to Gaayatri Kaundinya about her work as a composer and singer on The Hundred Foot Journey, Jungle Book and Million Dollar Arm. END_OF_DOCUMENT_TOKEN_TO_BE_REPLACED