Morphestra 2 is a new multitimbral instrument with 4000+ instruments made out of 26 GBs of samples, that runs inside the Sample Logis’s Synergy engine (inside Kontakt player or Kontakt). I have already reviewed Cinematic Guitars Infinity, and CinemorphX by Sample Logic, that are both based around the same working concept and gave them a pretty high rating (read the reviews here).

As the name suggest, Morphestra 2 is based on morphed orchestral samples, but within the Synergy engine, the possibilities of sounds you can get is almost endless. Some sample content is completely new, but most content is taken from the sound bank of Morphestra 1 and Morphestra generations, the predecessors of Morphestra 2. Let’s take a closer look at what Morphestra 2 has to offer.

As I have already pointed out in my Cinemorphx review, I must say, that I do miss a slightly cleaner way of presenting the presets. The groupings of the presets helps a bit, but since the sound bank is so huge, it is a real hassle to find the right sound you are looking for. I also still have a problem with the naming schemes of the presets, since the names of the presets tell you almost nothing about the sound. For examples how does one know what an “Overdose” sounds like. I wish every preset name had at least a small indication, if it’s meant to be strings, brass, plucked strings, percussion, ect…

Since I have already reviewed Cinematic Guitars Infinity and CinemorphX, I was really hoping to hear something truly different with Morphestra 2, but to my slight disappointment, sonic wise, I did not find anything completely “new”. Although the sample content is different then from Cinematic Guitars Infinity and Cinemorph X, the end results of the sounds you get is pretty similar. Since Morphestra 2 is made out of mostly orchestral samples, I thought, that It would still somewhat sound like an orchestra, but it doesn’t. When browsing through the presets, you quickly get a sense of what kind of sounds you can expect from Morphestra 2. I would say that in general it sounds very synthy and atmospheric, in the presets you will hear a lot of nice sounding evolving pads and synth strings. The loops and percussions sound incredible and will be very useful for any composer. 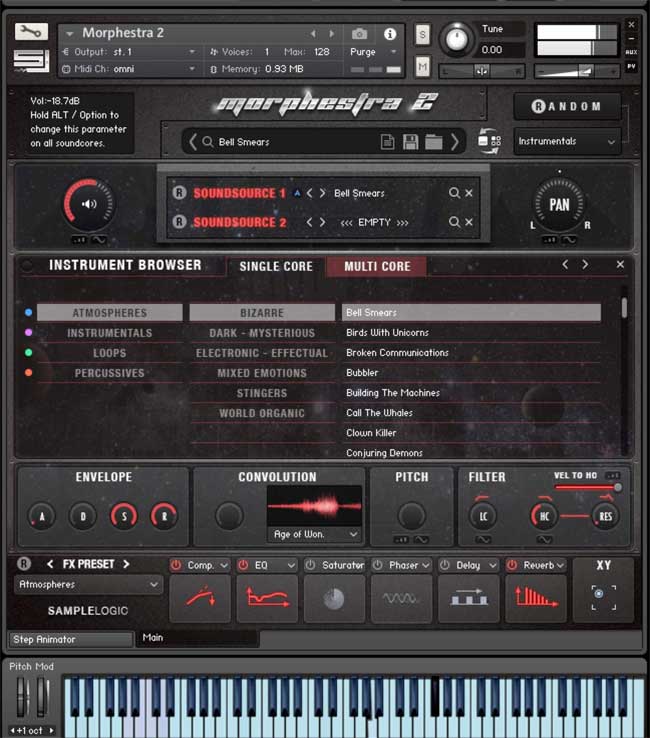 I spent another hour playing through the source material and I quickly realized why Morphestra 2 sounds nothing like an orchestra. The reason for that is, because the orchestral source material is quite poor in its nature. The brass source material for example is the weakest since it sounds like it was recorded from an 80s synth. But don’t get me wrong, I am not saying Morphestra 2 sounds bad, not at all, some sounds you can get out of it are incredible, all I am saying is, that don’t expect it to sound like an orchestra. The “orchestral” sound you can achieve are maybe more like the orchestral sounds Vangelis produces with his synths.

I suggest you watch video below and you will quickly get a sense of what kind of sounds you will get with Morphestra 2.

I installed Morphestra 2 on a Vertex OCZ SSD drive and the the single core preset load up in a blink, but the multicore presets need about 5s to load up, which makes searching this preset category very time consuming.

CREATE YOU OWN SOUND

The real fun with Morphestra 2 comes with creating your own presets and sounds, since the real point of the instrument is creating your own material. You can mangle the presets in numerous ways or even create your own patches using up to 8 sound sources simultaneously. You can morph freely between the sounds using a very intuitive XY controller, that is located in the middle of the graphic interface. Morphestra 2 also has a very complex step animator with which you can create arpeggios & stutters and much much more.

As in Cinematic Guitars Infinity and CinemorphX, the GUI can be quite scary at first glance and one needs some time to get to understand it, yet we can see Sample Logic put a lot of time and effort into making the interface as intuitive as possible. Not to mention, the GUI is very pleasant on the eye and has some very unique animations. You almost feel like you are in front of a spaceships controller (never hurts to have some extra inspiration). In comparison to Cinematic Guitar Infinity’s GUI, the Morphestra 2 GUI looks a little more clean. As mentioned earlier, the basic concept of all the new Sample logic libraries, that work with their new Synergy engine, is having up to 8 sound sources,that you can morph between or play simultaneously. Since things can get pretty complicated pretty quickly, I suggest any new user to go the Sample Logic website and look at the available tutorial videos. 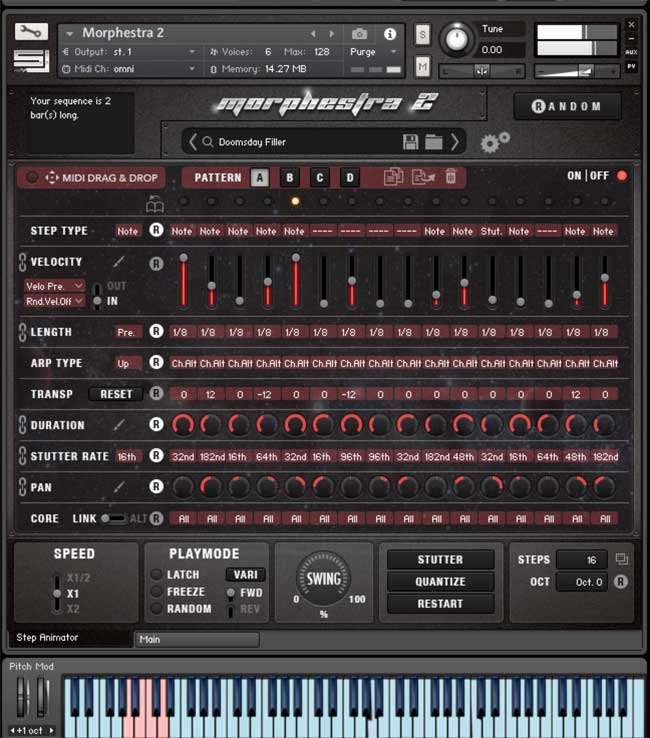 I mentioned that Cinematic Guitars Infinity and CineMorphX are unique instruments on the market, but I think Morphestra 2 is like trying to milk the cow too much. Although Morphestra 2 sounds great, sonically it does not offer a significant difference from the above mentioned sample libraries. So, in my opinion you do not need all 3 sample libraries. But if you are searching for a sample library, that can offer a variety of sounds, from soft atmospheres to epic percussion loops and a sample library, that inspires you to make your own sounds, you will not be disappointed with Morphestra 2. It is also 100$ cheaper than CinemorphX, so to spare 100$ I suggest you go for Morphestra 2 instead of CinemoprhX.
Score

Read our interview with Sample Logic. Don`t forget to rate the product yourself if you bought it in the “Reader rating” tab below!
More reviews from Anže Rozman
Check out our Sample Library Database for more alternatives
Click here for more news regarding Sample Logic.
Sample Logic Morphestra 2 review