CineMorphX is a new multitimbral instrument, that runs inside the Sample Logis’s Synergy engine (inside Kontakt). I have already reviewed Cinematic Guitars Infinity by Sample Logic, that is based around the same working concept and gave it a 5/5 rating.

The library also comes with over 6000 presets, so this truly is a beast of an instrument. Sample Logic states on their website: “Creatively reworking, re-morphing, and recreating over 30GB of its finest cinematic sample material, Sample Logic has succeeded in assembling the most comprehensive cinematic virtual instrument available anywhere — past, present, or future!”.

Lets take a look if CineMorphX (CMX from here on forward) needs to be in your virtual instrument arsenal for all eternity.

From all the source material, that Sample Logic recorded or made for CMX, they have created numerous presets. The presets are categorized in two main categories: Single Core and Mutli Core instruments. The single core presets are based only on one (or two) source sounds, while the multi core presets can be based on up to 8. 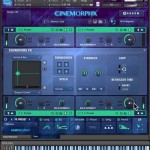 I must say, that I do miss a slightly cleaner way of presenting the presets. The groupings of the presets helps a bit, but since the sound bank is so huge, it is a real hassle to find the right sound you are looking for. The naming schemes of the presets are quite untraditional (Arab spring, Benghazi, Finding a cure, Ride of your life). I wish every preset name had at least a small indication if its meant to be a synth lead, synth bass, percussion, ect… I mean how should I know how “Finding a cure” sounds like?

I spent quite a lot of time browsing through the presets to a get a feeling of what kind of sounds CineMorphX can offer. It is very hard to generalize the overall sound, since it offers so much, but a few words, that come to my mind to describe the sound of CMX are “spacey”, bright, sparkly and atmospheric. Some of the presets are truly inspiring, but I must say, that I was slightly disappointed by the fact, that a lot of the them sound pretty similar to each other. I would rather have fewer but more diverse presets, since I got lost pretty quickly with such a huge selection.

I installed CMX on a Vertex OCZ SSD drive and the the single core preset load up in a blink, but the multicore presets need about 5s to load up, which makes searching this preset category very time consuming.

CREATE YOU OWN SOUND 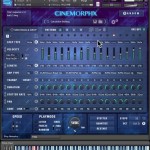 But the presets are only the tip of the iceberg of CineMorphX, since the real point of the instrument is creating your own sounds inside the engine. You can mangle the presets in numerous ways or even create your own patches using up to 8 sound sources simultaneously. You can morph freely between the sounds using a very intuitive XY controller, that is located in the middle of the graphic interface. CMX also has a very complex step animator with which you can create arpeggios & stutters and much much more.

* in the track, that I wrote to test out CMX, I used 8 instances of Cinemorph. I am running a 32GIG, 12core 2,5GHz i7 CPU and my computer and Cubase started to struggle after a while… 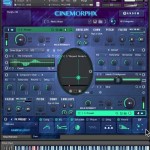 As in Cinematic Guitars Infinity, the GUI can be quite scary at first glace and one needs some time to get to understand it, yet we can see Sample Logic put a lot of time and effort into making the interface as intuitive as possible. Not to mention, the GUI is very pleasant on the eye and has some very unique animations. You almost feel like you are in front of a space ship controller (never hurts to have some extra inspiration). In comparison to Cinematic Guitar Infinity’s GUI, the CMX GUI looks a little more clean. As mentioned earlier, the basic concept of CMX, is having up to 8 sound sources,that you can morph between or play simultaneously. Since things can get pretty complicated pretty quickly, I suggest any new user to go the Sample Logic website and look at the available tutorial videos. With the purchase of CMX, you also get 20 part in depth AskVideo course on the usage of CMX. For users, that like to know all the ins and outs of their virtual instruments, this will be a real treat.

– Vast, immense, huge amount of content, presets, ect.
– “Infinite” possibilities of sounds, instruments, atmospheres, ect.
– Can be used in any style of music.

– Takes time to fully understand and get a hang of.
– The amount of content can be frightening at first. If not careful, you can find yourself “searching for the right sound” for hours.
– Loading times of the multi core presets are to long (5-7s for every preset – loading from a SSD drive)
– Very heavy on CPU performance

As Cinematic Guitars Infinity, CineMorphx is a unique instrument on the market. The amount of possibilities is almost infinite. With only this library, someone could easily score an entire movie or video game. If you are someone that likes to create unique sounds, this library is probably a must have for you, but if you are someone, that wants to load up an instrument and start composing immediately, then CMX might not be what you are looking for.

Yes, the presets do sound good, but finding just the right one will keep you browsing through them for ages. In conclusion I must say, that I really liked CMX and I will be using it in the future, but I was expecting Sample Logic to make a bigger leap forward from their previous similar product Cinematic Guitars Infinity. But all in all I give props to them for creating such a unique instrument!

Read our interview with Sample Logic. Don`t forget to rate the product yourself if you bought it in the “Reader rating” tab below!
More reviews from Anže Rozman
Check out our Sample Library Database for more alternatives
Click here for more news regarding Sample Logic.
Sample Logic CineMorphX review