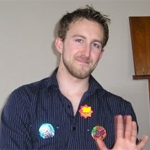 I am a freelance sound designer that works on a variety of formats from animation and TV to film, games and live events. I also run The Sound Architect in my “spare” time and usually just run around like a maniac between that and my projects. I’m also starting an MA in Post-Production and Sound Design at the University of York this October 2013 after receiving a scholarship from BAFTA and Warner Brothers.

Nice question. I’m very creative and I like to push boundaries, cliché I know, but I really do like to do things differently. I know there are certain guidelines that you have to abide by but you can also ignore some of them. I just like to make sounds that sound good. If I used an unorthodox way to get there it doesn’t matter because as long as it sounds awesome, that’s your job!

Sure, I have a Pro Tools 11 setup on a Windows 7 64-bit PC using an EMU 1212m soundcard. I use Tapco S5 Monitors as well as Beyer Dynamic DT100 headphones. I record mostly using an AKG C1000S and I use various VSTs and plug-ins.

I have to say that for a long time East West has been my go to for instruments and to be honest the built in Xpand 2 on Pro Tools is great with the right editing. I’m always trying to find more plug-ins to try and I’m still experimenting with different reverbs and things. The waves plug-ins are great and Voxengo seem to be pretty tasty too. The built in ones are great in Pro Tools but it’s definitely worth searching for new ones if your budget allows it!

When I have the time to experiment. It’s usually at night. I’ve spent many nights working until ridiculous times in the morning. Aside from that it’s mostly random times when I’ve been inspired by something I’ve seen, heard or thought about.

Well I have a long chat with the development team or director and gain as much information as I can about the direction they want to go in with the content. Once I’ve got an idea about what they want I begin just thinking about the kind of sounds everything will make. If I’ve got the footage straight away then great I can put sound to visuals but if it’s just concept then I get a lot of ideas in my head of what creatures, weapons, people will sound like. Plus I also look at how long it’s going to take and make sure I list everything that’s going to be required before I start creating/recording. It’s easy to get caught up in the creative side but not so easy to remember there will be some simple Foley in there most of the time so don’t forget the subtleties!

Haha, well they wouldn’t be secrets if I said ;). I kid, not really I share all of my knowledge and my creativity is influenced by so many wonderful and weird things that there’s not really a way to describe it. I always try new things because there are so many different ways to be creative that you should have more than one vent. I write short stories, I play guitar, I write music, I read, I play video games and play sports. Trying many different things and experiencing new creative worlds can really surprise you in how they can all link together and influence each other.

Well, nothing extremely new I guess but I have been working on soundtracks for a live horror maze. Recording a lot of screams and eerie noises whilst trying to steer away from the clichés. I just found the usual slowing down/speeding up and pitching up/down really works well. For example, squeaky pipes are great but if you slow them down and pitch them up even more as well as down for some lower end, you get some great metallic groaning and resonating sounds, so definitely experiment!

It’s a bit general but stand your ground if you know your right. On early projects I’d say something to a director and he’d kind of fob me off and then weeks later he’d realise we’d have to do what I suggested in the first place. It’s not about being difficult, it’s about presenting a good argument for what should be done because not a lot of people understand the audio process that aren’t in it so just make sure you explain your reasons in detail.

Yes actually I preach quite a bit on this subject. If it’s your passion, don’t give up. That’s the one thing that has paid off for me is I knew that I couldn’t do anything else and I was meant to do this. People still look at these aspirations and ask “When are you going to get a proper job?” which can be very off-putting for people out there.

Also, network, network, network. Not in a superficial kind of way at all though, people can smell if you’re fake a mile off. If you’re truly passionate about what you do then you’ll want to talk to people about audio, about their projects and meet all of these amazing audio professionals.

Speaking of passion, just make sure you create something regularly. Work on passion projects. Not only does it keep your creative juices flowing it also enables you to have a vast portfolio of work to display and also prove to people how much you love what you do.