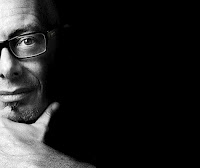 
Tell us a little about yourself and what you do for a living?

My name is Ryo Ishido. After a venturesome vocational past, (I was working as a TV stage designer, spend a few years as special effects coordinator at the Bavaria Film Studios in Munich for movies such as Wolfgang Petersen’s / 20th Century Fox ” Enemy Mine”, and worked as a graphic designer for several game companies – Square Enix, Eidos & Nintendo and more) I’ve decided to cut it down a bit and become a composer for games.
But hey…. life has always something special on the plate for you…so after 2 scores for Xbox 360 arcade games, I slightly slipped into the sound library GUI scene. And now, as for a living, I’m designing user interfaces for companies such as Audiobro, Sample Logic, 8DIO, Sonokinetic, Cinesamples, Best Service/Eduardo Tarilonte, Open Labs and some, which I’m not allowed to talk about it yet in public. Besides this, I have finally got the chance to do the score for an upcoming TV documentary.

Nothing…simply nothing. I just do “my thing”. If it stands out for someone…great. But I will never put me, myself and I over anyone else. I have a huge respect for any composer out there. Kudos.

Loads of stuff. Due to my work as an GUI designer for sample library companies, I get nearly everything for free, so this might be heaven…and hell…it is. Forgive me, if I do not name any company in particular. Oh, I can name one company, because I’m not working for them…Spectrasonics and their Omnisphere. Put me on Crusoes island…this is the one, I would pick.

The one above mentioned….Omnisphere. And the one, that does a lot of damage as well as the other one, which is essential. (damn…I hate it, to be politically correct). I also use Illformed’s Glitch, as well as iZotope’s Stutter Edit a lot.

I used to be a maniac during “night shifts”. Now I’m 51, so I’ll do my best around “normal working hours” but most of the time I do a long walk with my dog to reboot the system. Right after this, some magic could happen.

Understanding. Trying to visualize the vision of my clients. Not showing off with ego skills. I’m simply trying to build a musical foundation to what is above it. Speaking of games…I’m perhaps building level design for the ears. Music should be supporting, not taking over it.

Focus…open your eyes and ears. Thinking outside of the box. Being myself, but also being inspired. Learning from fails. And respecting everyone.

I’m an 80’s kid so I just love turning knobs, or how one would say today, soundshaping things. I’m also a big fan of creating tons of sound layers, just to remove most of them to the basics. Trying to tell a story, having highs and lows. Actually this is the most fun part for me after recording, looking for those parts and / or sounds which are telling the story and get rid of those that don’t. Less is more…true thing that is.

There is an “specific lesson learned” on every project I do. If not, this would be meant “creative stillstanding”. Every project is a constant curve upwards, if you are willing to see it…even if that curve includes tons of fails. You are growing up on them.

Be decent, moderate and kick some serious ass as well. Do not hunt down every Hans Zimmer score you might come along….be yourself. You can only sell your true “You”, not a copy of what might be hip to be square. And be respectful…You are trying to make it, as well as everyone else. Help, share and simply love what you do.

In this interview, we talk to composer Brandon Roberts about his work on Unbroken: Path to Redemption - An unbelievable true story of Olympian and World War II hero Louis Zamperini. END_OF_DOCUMENT_TOKEN_TO_BE_REPLACED

In this interview, we talk to composer Kurt Oldman about his work on a SuperMansion series and also touch on his past work. END_OF_DOCUMENT_TOKEN_TO_BE_REPLACED

In this interview, we talk to Gaayatri Kaundinya about her work as a composer and singer on The Hundred Foot Journey, Jungle Book and Million Dollar Arm. END_OF_DOCUMENT_TOKEN_TO_BE_REPLACED