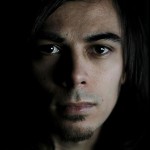 You just scored the horror film “Some Kind of Hate”, what was your favorite part of working on that film?

I’m kind of an experimental guy, and I love exploring interesting ways of making sounds. Some Kind of Hate was great because no matter how crazy I got, the director Adam loved it. So that led to interesting things like playing guitars with razor blades and messing around with detuned cellos and basses. It’s always fun being able to play and experiment in that way.

How did you become involved with “Some Kind of Hate”?

Adam and I had an early meeting and bonded over our mutual love for strange music. Working together seemed obvious.

Where did you get the inspiration for the “Some kind of Hate” score?

Most of the inspiration came directly from the characters themselves. The slasher character Moira uses razor blades to hurt her victims, which is what led to the idea of using razor blades in the score. Lincoln, the protagonist, is really into metal which led to the use of distorted guitars and noise. Musically, Adam and I were referencing a lot of noise music and drone metal.

What has been the most memorable project you have ever worked on and why?

I recently scored an amazing film called Too Late starring John Hawkes which was shot in five unbroken, 15 minute takes. The film is so unique, as soon as I saw an early version I knew that I had to work on it. We recorded orchestra in Nashville, but due to various circumstances I had to attend the session remotely from a storage room in a New York hotel. I was getting a high quality audio feed through my laptop and directing the orchestra through Skype. That was pretty memorable.

Do you have a “go to” instrument or program that you find yourself using a lot?

I use cello all the time, both for interesting extended techniques and also just pure emotive power. It’s pretty much the perfect instrument.

You have scored many different film genres, do you have a favorite?

Anything that gives me a chance to push myself musically is great. Because of my experimental inclinations I find myself doing a lot of horror work, but my favorite projects are the ones that allow me to bring that kind of thinking to a genre you wouldn’t expect. Most recently I scored a health documentary called Special Blood that I also co-wrote. For that I got to combine emotive orchestral writing with interesting synths and sound design. That’s scoring heaven for me.

I LOVE trashy dance music, but I don’t feel guilty about it at all.

What advice would you give to composers just starting out in the business?

Be yourself. I think a lot of composers think they need to sound like Hans Zimmer or John Williams to get into the business, but if you can find your own unique voice identity, you’ll stand out and people will take notice.

In this interview, we talk to composer Brandon Roberts about his work on Unbroken: Path to Redemption - An unbelievable true story of Olympian and World War II hero Louis Zamperini. END_OF_DOCUMENT_TOKEN_TO_BE_REPLACED

In this interview, we talk to composer Kurt Oldman about his work on a SuperMansion series and also touch on his past work. END_OF_DOCUMENT_TOKEN_TO_BE_REPLACED

In this interview, we talk to Gaayatri Kaundinya about her work as a composer and singer on The Hundred Foot Journey, Jungle Book and Million Dollar Arm. END_OF_DOCUMENT_TOKEN_TO_BE_REPLACED