Today we will be reviewing PSE’s (Pro Sound Effects) popular sound effects library called Hybrid Library. The library was provided to us for reviewing purposes. Let us see if this is something that will help you on your sound design adventures.

It goes without saying that this bundle is humongous. It features over 50.000 sound effects and is delivered on a dedicated 1TB 3.0 USB hard drive. There isn’t much to say about the hard drive itself, so I will skip describing a box with a logo on it.

Hybrid Library is a collection of sounds, recorded by industry professionals such as Ric Viers (Blastwave FX), Stephan Schütze (Sound Librarian), Ken Skoglund (Sound Control SE), * and other sound designers around the world. It really contains a lot of handy sounds and even some rare sound effects. Each sound or sound group is placed in its own category. In these, you will find various foley sounds, explosions, debris, soundscapes, weapons and other useful sounds. For a thorough overview of the sounds included, I suggest checking out the full list here.

*Edit: Douglas Price, David Forshee, Jeremy Siegel are members of the Pro Sound Effects team. They were involved in the development/curation process, but they did not record any of the sounds in the Hybrid Library.

On top of the sounds, you also get around 100 downloads from the PSE Online Library, which is a nice addition to the whole package.

Getting through the library will take a lot of time if you check out the sounds one by one. I will describe metadata and searching in the next segment, but before we touch on that, I would like to briefly talk about the quality of the sounds in PSE’s Hybrid Library.

The sound effects market is booming right now and the quality of boutique libraries is fantastic. Unfortunately, compared to boutique libraries, PSE’s Hybrid Library, at times, feels a bit dated. By that I mean that some sounds feel a bit old and somewhat hollow. This isn’t a big deal since there aren’t many of those sounds in the library anyway but I feel it is worth noting.

In terms of technical quality, Hybrid library offers various sample rates (44, 48 and 96 KHz) all of which are quite an industry standard right now. In terms of perceived sound quality, which of course is a very subjective thing, I have to say that some sounds could use some more editing or be replaced. The noise floor in some samples is quite high and could be edited out. Some of the sounds also clip in some places.

I understand that with such a huge library, it is difficult to maintain consistency at a 100% level, I’m just pointing out some of the stuff that might be useful considering. Fortunately, these faulty recordings only add up to maybe 1% of the whole library.

On the other hand, you have recordings that are just fantastic and beautifully recorded with a lot of details captured.

With such a huge library, naming conventions and metadata are the key to finding the right sound, and for the most part, Hybrid library does a good job with that. However, due to the file naming system, some sounds may pop up as a wrong search result. I’ve read, that in the past, Hybrid Library did in fact had issues with metadata, but from my point of view, this has been fixed for the most part. I have tested metadata in Soundly and Reaper and both gave accurate results. 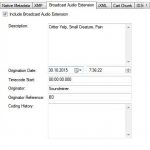 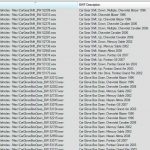 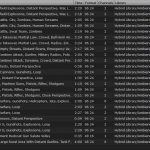 The value of the Hybrid Library is something that took me a long time thinking about. On one hand, it is very pricey on its own, but on the other, compared to similar libraries, it is really not too expensive. The fact is that a full license, which is $3,995 for a company or $1,995 for freelancers, equals a new or used Sound Devices 702. That said, if you are a professional sound designer or sound designing company and want to build a decent sound effects library (which you probably would do), Hybrid Library in fact offers quite a high value.

I am not sure if there are duplicate sounds in other sound effects libraries like Hollywood Edge or BBC’s libraries so be sure to check that out if you own any of those.

Compared to a more affordable solution (e.g. Studio Mark III from Best Service), Hybrid Library has, in my opinion, more of everything and at a better sound quality. Compared to its direct competitor Hollywood Edge ($12,295), Hybrid Library is significantly more favorable although it also comes with fewer sounds. For a freelancer, who doesn’t do/isn’t able to do much field recording himself, this library is something really worth considering.

Hybrid library, in my opinion, has a ton of value, even though the price tag makes you think twice about how and where to invest. For the same amount of money you could get quite a lot of sound effects from dedicated stores and if you are into field recording, you might even want to rather invest into a decent pair of microphones and a professional recorder. Having said that, if you aren’t interested in field recording, then this may just be the solution you are looking for.

If you already own a Hybrid Library, please feel free to share your thoughts in the comments below.

Hybrid library is a giant, extremely useful sound effects package with a great sound quality. Yes, at times, it seems a bit inconsistent and some recordings even feel dated. Despite the steep price, there is no denying that Hybrid Library does add quite some fresh and rare samples to your sound arsenal. If you’re serious with sound design, this is definitely a library worth investing in.