It is something about gadgets that men and women reflect on their childhood. That feeling of being excited about your new toy. I had the same feeling when I got PL2 Leukos in my mailbox. Oh the joy.

Once the box was opened my expectations were a bit short lived since there was only a protective foam and somewhere under that a small white box that resembled to a TV adapter box made in the 90s.

As mentioned the PL2 Leukos comes in a simple box protected with standard foam – just enough to keep it safe on the journey from manufacturer to its recipient. That is it. There was nothing to feel excited about once the box was opened.

Of course some might see this differently but let me try and explain on why I feel this is important. First of course is the product you are getting and I will get to that in a bit. Second thing (which is meant more for the developer) is that good package will strengthen the bond between the developer and it’s customer. In the package that I have received, there was no documentation (online only) and no other material about the company like promotional material of companies other products or anything really.

Instead you are presented with a small white box. The PL2. Speaking of which I have to say that it doesn’t look good either, especially in this day of age when you can mold anything into anything. I might be reaching here but the PL2 just doesn’t feel right. I didn’t expect a miracle but it could still look a bit better. To be honest it looks like an old TV adapter. Some might disagree and that is fine.

On the other hand the Leukos isn’t meant to be on display but hidden somewhere in your studio. It’s very light and really small and I have to give props for making a beast in such a small box.

Here is where things get interesting. The PL2 is an analog synth with a digital (state variable) multimode filter running at 125kHz, followed by an analog lowpass filter and it sounds pretty cool for its size. I got the white version which is only operated via midi and a computer.

For its size (as I have mentioned) the PL2 sounds fantastic and you do get a feeling that you are running a true analog synthesizer. The sound is warm and dirty and you can get some pretty cool results with it especially if using different firmware. But there is a problem.

Since the PL2 is controlled via computer and midi there were many connection dropouts and I don’t think it is the PL2’s fault. It is the software that accompanies the synth.

I have to say that for me this was the most disappointing thing (even if its offered for free) and I have tested it on two different machines (PC and Mac). On Mac I experienced some weird glitches like controls being inversed. Here is an example: The sliders had an inverse values meaning, 100% was actually a 0% and vice verse. The same problem didn’t happen on PC. 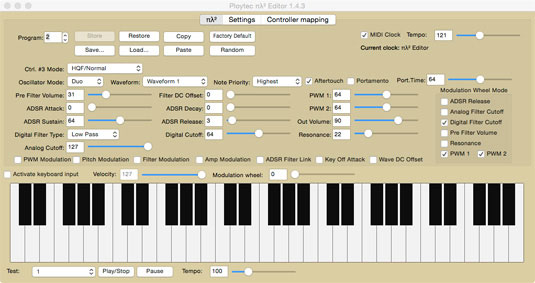 Second was the fast mode which should enable you to move controls in real time. Both Mac and PC had the same issue of not really working in real time. I am leaving the option that there was maybe something wrong with the USB (bought a new cable for testing purposes) and midi cables because there were plenty of connection dropouts.

What I have written so far might seem negative but not all is. The PL2 also offers few different fimware updates that can be switched at anytime (not in real time). You have a drum mode which sounds very nice, a standard 2 square oscillators and a speech synthesis which gives you that speak and spell sound.

Another cool thing is the Reaktor patch which I found to actually worked way better than the dedicated software. It looks really good and it is easy to navigate through. The dropouts still occurred but it was less than in PL2s dedicated software.

Overall I have mixed feelings about its software. On one hand it works and on the other it makes you want to pull your hair out and that really reminds me of the limitations of an old analog gear.

The price and the value

The PL2 Leukos will set you back for around 99 EUROs which to be honest isn’t really cheap and the value you get is debatable. I might have received a faulty device, I am not sure, but for me the price is a tad too much.

On the other hand, you do get a true fat analog sound that doesn’t sound cheap at all. If you own a bad synth and let us suppose its analog, then you know that some hardware can produce that thin plastic popcorn sound that makes you want to pull out your ears. The PL2 actually shines in this regard.

The PL2 Leukos is an interesting synth which offers a true fat analog sound. The provided dedicated software is questionable (to some degree – excluding Reaktor patch, which works fine) and the device itself feels a bit on the cheap side. The various firmware is a great addition to PL2 but it comes at a price.

Don`t forget to rate the product yourself if you bought it in the “Reader rating” tab below!
Ploytec PL2 Leukos review