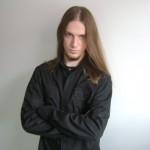 I am currently a student of Audio and Video Technologies at Advanced School of Electrical Engineering in Belgrade, Serbia. I got into film music and sound design ever since I was in high school, since I wasn’t a very good student I had to find an occupation for myself, so I’ve decided to put my love for music and films to good use. That’s when I started my OARA music project. I am a self educated musician, composer and sound designer. The school just gave me technical info on the gear that’s being used in the industry. I’d like to do only music and sound design for a living, but you have to pay bills and scholarship from something as a student, so I do a lot of freelancing on TV and whatever makes money.

Well, I wouldn’t call myself a professional yet, I still have a lot to learn. But the thing that makes me different are probably my crazy ideas for making sounds. I do a lot of sound designing for my compositions and I’m using a lot of non musical elements in my scores and make them sound musical, even though sometimes it sounds weird. One time while I was recording sound effects for my 132nd AES competition entry (which won gold award by the way) I went to the Zoo and recorded monkeys and tigers for alien sounds which eventually I turned into impacts sounds and big swooshes. I actually got pretty close to the Tiger (bad idea). Monkeys were throwing things at me also.

It’s pretty basic stuff. My central workstation is my PC which has a 1.5 TB hard drive for all of the sample libraries. My main DAW is PreSonus Studio One. Also, I have 2 MIDI Controllers (CME M key2 and Akai MPK mini). For controlling Studio One I am using PreSonus FaderPort. And I use Adam A3X studio monitors. Pretty basic and affordable stuff. Sure I’d like to have a NASA Control Center-like studio with all of the hardware synths and large racks of equipment, but would it make me a better composer? Probably not, It’ll just confuse me. I don’t even use that much of sound libraries too.

Like I said, I don’t use that much libraries. I have realised that the more you have, the more distracted you are going to get during your workflow, because you’ll spend more time in searching the massive library of sounds, than get things done. My main orchestral library is ProjectSAM stuff, and as far as non orchestral libraries, I use Heavyocity and Sample Logic. My main synths are Zebra and Omnisphere. For adding sound design elements to my music, I’m making my own stuff with iZotope Iris and I use Sonokinetic Project Infinity (that one is awesome). For audio processing I use bundled content that comes with Studio One, since all of these libraries sound pretty good on their own, so just a bit of PreSonus Pro EQ and a compressor here and there on the percussion, and it sounds nice. For reverb I use Lexicon PCM native and Altiverb. I’m not very good at mastering, so I rely on iZotope Ozone to do it for me.

This may sound weird, but I’m most creative while I’m asleep. Most of the ideas come to me in my dreams(Inception?!), and sometimes I do wake myself up in the middle of the night because I have to start writing right in that moment while the idea is fresh, even if it’s like 3 A.M.

I read the script over and over again to get into the storyline, so I can start writing themes and start thinking about the atmosphere before they even start shooting the movie. I tend to visit the set and feel the atmosphere and ambience of the scenes. And then when I finally get the edited reels, I start writing the final version of the score that’s to be synced with the picture. I also spend a lot of time with the director and the crew talking about the film and listen to their ideas. You’d be surprised how much inspiration you can get just from the crew’s feedback.

Hmmmm…. The lack of social life probably? I really don’t hang out that much. You have to LOVE this kind of work and live it on order to be able to do it. I’d say that most of my inspiration comes from watching movies, playing games and reading books, so that’s probably my creativity fuel. And Snickers chocolate! But the biggest inspiration for me is my muse. She is a girl from Bosnia And Herzegovina, but I won’t give up her identity. Let’s just call her Lady Oara, because OARA music project has her name.

Get wild and crazy! One interesting thing happened to me while I was working on my AES competition entry: I recorded my juice blender sound by placing the microphone inside the blender itself! Of course, I had to secure the microphone with a lot of duck tape, so it wouldn’t fall in and get shredded by the blades. If that happened, I wouldn’t be doing this interview right now, because the guy who gave me the microphone would probably kill me! I needed this blender sound to simulate the inside atmosphere of a space ship cabin. Another thing are those monkeys and that tiger at the Zoo. Also I like to randomly mess with the options on Zebra and Omnisphere and sometimes I get cool results.

If you’re recording animal sounds, don’t get too close to them! I like big percussive tracks, and percussion plays an important part in my scores, whether it’s synth percussion, ethnic or orchestral, so here’s a thing that I’ve learned from an advice composer Jason Graves gave me once: Pick ONE track to have the low energy and put a high-pass filter on the rest at around 300-500HZ. Use EQ on the different percussive instruments and see what you can scoop out of each one, preferably different frequency for each instrument, in the 500-5k range. Also pan them to give them space, but the really low stuff needs to be in dead centre.

Be yourselves at what you do. Search for your own style and type of sound. Don’t try to be the next Hans Zimmer or John Williams and try to sound like them. Hans Zimmer is already the best at being Hans Zimmer, and John Williams is the best at being John Williams. If you work hard enough and start making a serious name for yourselves, people will remember you for what YOU do and how YOU sound. Always remember that one. As morbid as this may sound, but one day when I grow old and laying in my death-bed, I want to be remembered as someone who composed great original music, not as someone who sounded similar to other composers. It’s good to have role-models, but it’s not cool trying to play with their own ideas.

In this interview, we talk to composer Brandon Roberts about his work on Unbroken: Path to Redemption - An unbelievable true story of Olympian and World War II hero Louis Zamperini. END_OF_DOCUMENT_TOKEN_TO_BE_REPLACED

In this interview, we talk to composer Kurt Oldman about his work on a SuperMansion series and also touch on his past work. END_OF_DOCUMENT_TOKEN_TO_BE_REPLACED

In this interview, we talk to Gaayatri Kaundinya about her work as a composer and singer on The Hundred Foot Journey, Jungle Book and Million Dollar Arm. END_OF_DOCUMENT_TOKEN_TO_BE_REPLACED