Today we will be reviewing the new vocal sample library from Eduardo Tarilonte and Best Service called Mystica. There are a lot of similarities (GUI wise) between Mystica and previous libraries (Cantus, Altus, Shavannai) Tarilonte released so I am going to focus more on strong points in this library.

Mystica is not that big (cca. 3GB) and it only features chamber female choir which if you already bought Cantus, will be a nice addition as they complement each other really well. Along with the main patch you will also receive phrases, some sound effect and again a nice collection of pads. The structure of Mystica is similar to other libraries Tarilonte has done which is not bad at all. Why fix something that isn’t broken, right?

Having said that, I would perhaps like to see more content wise but I have to admit that this is strictly nit picking as this sample library is outstanding. Eduardo wasn’t voted “Sample developer of the Year” for nothing.

The sound of Mystica is phenomenal. The voice could warm you during the cold winter night and the scary sound effects would make big bad wolf run away before you could release the key on your keyboard. Just how I was amazed with the sound of Cantus, I am even more amazed with Mystica. The sound is authentic and you won’t have any issue with adding it to your mix. There are no extended notes which again is fine. In other words at no point in time will Mystica sound like a fake. 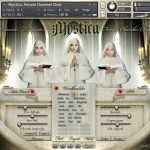 There is one new addition to the whole graphic interface and since I have done detailed review of Cantus, I would like to point you to that review as you will find all of the information there.

The new feature of Mystica is the ability to import and export phrases to Cantus and vice versa. The current version of Cantus still doesn`t support the import/export option, but I have checked with Eduardo and he explained that the update was soon to be expected. This addition is nice if you want phrases and words to be sung by both vocal libraries.

I much prefer using standard legato vowels (A, E, I, O, U and Mmm`s) and again in Mystica, they don’t disappoint in terms of playability. Also you the keys are split into sections. The upper part of the keyboard will play the sound while the mid-lower part will act as a key switch and switch between the various phrases and vowels.

Word builder makes it return and as you would expect it works pretty nicely. With the help of word builder you can construct various phrases you’ll probably have hard time saying yourself. It is a nice addition to any vocal library and another plus as it gets the job done right. Overall the GUI seems familiar and if you already bought any of the vocal libraries from Eduardo Tarilonte then you should feel like at home. New users also won`t suffer from disorientation as Mystica is a pretty straight forward with its knobs and sliders.

At 199 Euros, Mystica justifies its price. There is just the right amount of content here but in reality you are paying for quality and not quantity. The vocals are nicely recorded, the female choir did a great performance and the graphical interface has enough options to play with.

Mystica is another winner from Eduardo Tarilonte and Best Service. The sound is full, rich and warm and you hardly get the feeling that you are listening to a recording. Eduardo seemed to have found his niche in these type of libraries and to be honest it really shows. Mystica simply is a must have.

Read our interview with Eduardo Tarilonte. Don`t forget to rate the product yourself if you bought it in the “Reader rating” tab below!

Alternatives
Here are some alternatives for you to explore

Mystica review (Eduardo Tarilonte and Best Service)
Mystica is another winner from Eduardo Tarilonte and Best Service. The sound is full, rich and warm and you hardly get the feeling that you are listening to a recording. Eduardo seemed to have found his niche in these type of libraries and to be honest it really shows. Mystica simply is a must have.