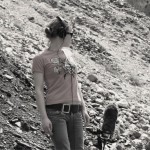 Hi! My name is Melissa Pons. I am a sound person. The kind that ruins weekend vacations with other people because I want to stop dozens of times to grab the Zoom in my bag and record something. But for many years I thought I was a music person, so I took a degree on Music Production and Technology. However, it was there that I started to be more attentive to the sound itself then to the music – I guess I was learning how to listen.

I recorded for a small independent short-film in the second year and went addicted, even with little understanding. When I finish that graduation, I spent a year at home studying and practicing, and that was when I learned more in short time. Then I went to a Master Program on Multimedia with Sound Design specialization, and had another extremely productive year, thanks to my Sound Design teacher.

This year, I did sound design for a couple of animations, featured-films and mobile games. Occasionally I do audio restoration that I find pretty cool as well and I’m currently in the pre-production of a documentary, which is new territory for me.

Well, it’s not to say at all that my peers are not like that, but I usually have a lot of attention to detail on the projects I’m working and I am very very patient, particularly in post. There I am always thinking in perspectives and points of view, finding relations between elements and how to enhance the narrative, but I guess this is just my job. I believe that even in the most poor productions sound can always make it better, with no exception. I guess I am an enthusiast.

I’ve been extremely lucky to use Sound Devices in the latest recordings I’ve done, and the mics depend on the project I’m in. I usually work with Cubase or ProTools for DAW, and since I have no personal studio base, I usually go to this studio where we have an Apogee Rosetta 200 and Aurora 16, and custom made speakers by Reflexion Arts. From the bunch of microphones, I often use the Neumann TL 103 and also did a couple of juicy recordings with an ATM 250de and a Mke-13.

For audio processing I use a lot of Waves, particularly for EQ and dynamics and I’m also a big fan of Wave’s Enigma and Doppler. When it comes to virtual instruments, I use Reaktor a lot, iZotope Iris and Absynth sometimes. When I need something more simple and very specific, I often use MaxMSP, although I tend to get lost in there, playing around. For audio restoration, iZotope RX absolutely.

Certainly when I am playing games, but most of all, I feel creative whenever I am working. If I’m just sitting around being lazy there’s no way to be inventive. And it doesn’t matter if I’m in a good or bad mood. I also feel more inspiration during the night time, maybe because there is more silence around.

Having a solid understanding of the narrative and a deep sense of the environment are key points for me. Then, I usually treat a lot of elements / objects like characters with a responsiveness from what is happening around or with them. For example, when I worked in the animation film for Soundtrack Cologne competition in 2012 (which, by the way, was nominated for sound design and music) I always had a particular sound for the little rocket even when it looked like an inanimate object. I guess that Looney Tunes had its influence! The other thing I always have in mind is to figure out the balance between the information the spectators or players are given and the film / game character’s perspective. For games, in particular, I always want to make sure that the player receives the correct message and feedback from everything he / she does, and this applies more for the interface sounds. That is why I often say that creating the sound for a button it’s not as simple as it looks like.

If they were secrets I couldn’t share them. :) I guess that the “secret” is to experiment and think outside the box. A couple of years ago I attended a webinar with Ric Viers where he said something like the key to originality is to avoid doing the five top things that come to your mind when you’re sound designing for something. We are constantly linking the information we perceive to our memories, so it is important to gather new insights in order to create new references: watch different things, be with different people, get out of our comfort or “taste” zone once in a while. I was once watching an animation I want to sound design for while the washing machine was working. The film itself had absolutely none of that stuff but, believe it or not, it gave me some ideas on dynamics and ambiances. It’s not that one will copy exactly but it’s like looking at things through a new filter.

From time to time, I have surprises from regular work. But what I find awesome is the kind of sounds one can create from audio repair. For example, when you are reducing noise so heavily from a voice recording that the outputted noise is often a sci-fi thing. Spectral repair or other softwares that enable you to pick harmonics by hand are a golden pot of resources for robotic sound-like creatures and things, insects and wherever your mind takes you.

There are always lessons learned and I think they have more to do with people and finding yourself as an artist then with particular techniques or tricks (besides never forgetting to bring adapters for your headphones and batteries). I am an apologist of always doing the best possible – either if you are working for free or if you hate the person who hired you: if you made a compromise with someone, that should be respected, no matter what. The next thing is if that someone doesn’t respect your work or your person, wave a polite goodbye and leave. A stress-free mind is essential. Seen from the other positive side, doing a great job will make the client want to work with you for life.

Don’t let limitations stop you. For months, the only equipment I had available at all was a laptop and headphones. That didn’t stopped me from researching, creating sound effects with several techniques and uploading them to my soundcloud. That was essentially how I got my first mobile game gig! Creating a network of possible work-buddies and more experienced peers is extremely important for professional growth. And… always remember: as sound designers, we are much more than library SFX – they don’t think or listen.