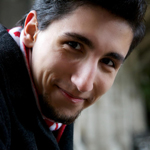 I work as a composer for media, primarily writing for games. For example, I’ve just been able to release the score for the #1 best-selling iOS/Android title, Star Command, and I’m very proud of how well the game has been doing.

Canada has been my home since I was a child, but I was born in Romania and am the only person in my extended family with any ounce of creative inclinations. Coming from a family of engineers and doctors has, I think, been beneficial to me as it’s kept my work grounded and reminded me not to get too stressed. After all, I get paid to make noise!

When I’m not writing music, I’m likely working on an article for one of various online publications, or thinking, traveling, reading, gaming…

I’m not sure I like the idea of standing out by way of serving a specific niche. That seems a bit backwards to me — how do you broaden your horizons by narrowing your scope?

The reality is that today’s media scoring landscape is quite crowded, but I welcome the crowds with open arms because it reminds me that I don’t want to compete with people on price (no one wins the under-bidding war) nor by resigning myself to a particular “specialty”.

I strive to stand out by offering the best possible quality of service. And I don’t just mean musical quality, because one of my favourite parts of this job is the opportunity to interact with the wildly creative and talented people I am proud to call my clients. That interaction is crucial to developing a good score.

Both parties learn from the experience and the end result is invariably better. In other words, my focus is more on being an excellent contributor to the team and less on being different. Remember that meme picture with the bent fork? It says “Just because you’re different, doesn’t mean you’re useful.”

My studio’s heart is a 2008 Mac Pro that’s been gradually upgraded to include more RAM, more hard drives, an SSD system drive, and all sorts of other goodies. Attached to it is an Apogee Duet 2 audio interface and a pair of Audio-Technica M50 headphones that I’ve temporarily had to resort to mixing on while I replace my old monitors.

Software-wise I’m primarily a Logic guy, though I own and use copies of Reason, Ableton Live, and Reaper sometimes when I feel their personalities may be more suited to the track I’m working on. Sibelius handles any notation duties.

Whenever I need to record some live audio myself, I do so using a Yeti Pro mic in the studio and a Zoom recorder while on the go.

My collection of sample libraries and synths has grown steadily to the point where I rarely buy new tools these days. As for what’s in the collection, it includes almost everything from EWQL (except the new Hollywood series and the pianos), most of 8dio/Tonehammer/Soundiron’s catalogues, LASS 2, Cinematic Strings 2, Sample Modeling’s brass collection, plenty of VSL, everything that Eduardo Tarilonte has ever produced, Pianoteq 4, most Native Instruments libraries and products, MachFive 3, Omnisphere, and a ridiculous variety of software synthesizers.

For processing, the most consistent presence across my tracks is without a doubt the FabFilter plugins. They remain the most flexible, intuitive, and convenient options for the majority of my bread & butter mixing work. Alongside them, I’ll bring in some more colourful processing plugins from the likes of Slate Digital, Softube, PSP Audioware, and any number of creative mangling plugins.

Ultimately I’m not a very big brand loyalty person — I follow the quality wherever it is served from, but Gear Acquisition Syndrome can be crippling, and I’d prefer to spend my time learning to get the best out of what I have.

It’s difficult to say actually. I tend to stay up too late and I hate mornings, but I’m still up early during the week getting a head start on the day’s cues.

Creativity can be harnessed by routine, but ultimately it’s a fickle thing, which is why I frequently wake up in the middle of the night with an idea that must be recorded, or I’ll find the perfect theme while eating dinner, or a clever modulation will occur to me while I’m outside wandering in the woods.

As necessary as it is to cultivate a productive work ethic, there’s also value in serendipity, and I continue to seek the perfect balance between the two.

In a word: immersion. The deeper I can get into the game’s world, mythology, imagery, and general headspace, the better I can work.

This is why I love working with developers who are willing to bring me on board early on in the process, because it allows me to be a participant rather than a random outsider who gets called in at the last moment to fill some gaps.

On a more technical level, I usually start working out thematic scores at my piano and I do similar work for ambient scores using a synth (looking forward to my first hardware synth exactly for this purpose!) Either way, the material very quickly makes its way to Logic where I create customized templates for each project.

The rest is basically just transcribing things from my brain into the sequencer and tweaking everything with the client until it fits the game like a glove.

Honestly, there are no secrets — only hard work and perseverance. If anything, I’d say balance has been a valuable ideal that’s helped me thrive. Sometimes it’s important to let go and step back a bit. Even on tight deadlines, giving your brain some space does wonders for keeping the material flowing and the quality high.

I also watch a lot of smart people talking about interesting things. I supplement my diet of Nutella with healthy doses of TED Talks, debates, nature documentaries, tutorials, and whatever else ensures the brain wheels are always turning and learning. Keeps things in perspective.

Not specifically. I hope that any audio technique I make use of is interesting…otherwise why use it, after all.

I will say that some of the most interesting sonic seeds that I’ve planted have come from simplicity rather than complexity. Sometimes it doesn’t take much to transform a mundane sound into something extraordinary, and ultimately that’s a more rewarding process than beginning with something wild and exotic and trying to make it more so.

Every project is a new learning experience. Rather than zero in on a specific lesson though, I’d like to mention a broader lesson that I’ve learned. The world has moved on from the time when each person had a single career and one job for their entire lives.

Freelancing is hard, and it’s also unstable, so don’t make things harder by erecting artificial boundaries around yourself. I learned early on in my work that alongside music I could also do sound effect work, and I discovered that I could supplement my audio income very well by writing articles for various publications. Later, I began to develop websites and sell photography as well; simple hobbies that I refined my skills for to the point where they became valuable to others.

Many people have a “day job” and then their music work while they start out (which is good, because it takes time to become self-sufficient in this industry), but what I’m getting at is that the “other” jobs don’t have to be a chore — build them off of something else that you love besides music!

By cultivating several paths, you can shift the burden of supporting yourself off of one single pillar and inject a measure of diversity in your work week. The flip-side is that you need to be careful not to fragment your attention, but if you can manage several avenues then the rewards are bountiful.

There are many obvious answers to this question, so I’ll skip those and focus on one that I have found to be a huge benefit to my work. When I was choosing a university path, I was confronted with the possibility of pursuing music or something else…and chose the latter.

It wasn’t because I thought a musical education wouldn’t be valuable to me; rather, it was because I recognized that in order to be a compelling asset to future collaborators, I would need to have an understanding of subjects outside my chosen field. If I acted like the aloof auteur hiding in his cave making music, I would be perceived as such and would have trouble with the networking that’s so important in our industry.

My education therefore covered a lot of facets of the media world, from digital/new media to broadcast to film and web. This equipped me to understand what everyone else’s job is too, and how my work fits into the bigger picture.

Being able to carry on an intelligent conversation with a client about their work is a tremendous asset.

For me, learning is an ongoing process, and I make sure I’m always absorbing and experimenting so that my horizons and skillset continue to expand. Being able to be self-directed in one’s education is crucial, because if you rely on academia as a crutch for forcing you to learn things, then you risk failing to cultivate the kind of attitude that will allow you to push boundaries and explore new territory once you leave school. Nothing will kill your music career faster than stagnation.
It’s also worth mentioning that your education gets 80% of its value from you: the diploma isn’t going to get you any jobs. Get involved, make connections, and participate deeply in your education or you’ll walk out of school with nothing but a poster and debt.

Final thought: have fun! If you can make it, you’ll be living a rare and wonderful dream.

In this interview, we talk to composer Brandon Roberts about his work on Unbroken: Path to Redemption - An unbelievable true story of Olympian and World War II hero Louis Zamperini. END_OF_DOCUMENT_TOKEN_TO_BE_REPLACED

In this interview, we talk to composer Kurt Oldman about his work on a SuperMansion series and also touch on his past work. END_OF_DOCUMENT_TOKEN_TO_BE_REPLACED

In this interview, we talk to Gaayatri Kaundinya about her work as a composer and singer on The Hundred Foot Journey, Jungle Book and Million Dollar Arm. END_OF_DOCUMENT_TOKEN_TO_BE_REPLACED