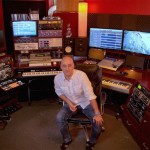 Tell us a little about yourself and what you do for a living? Why you chose this profession?

I am a composer for films, television series, movie trailers and radio themes. At first I played Top 40 hits at nightclubs, I loved to twist them around and make fresh new arrangements. From there I developed a passion for arranging music in multiple styles and eventually became a technician/helper for my brother who was musician and also composer. After a few years, I decided to branch out on my own and pitched a friend who needed music for his first cartoon gig. I then did a short for free, which opened many doors, and everything started from there. Honestly, I didn’t choose this profession. I mean yes I wanted to be a successful musician, but I never thought I’d do this for a living!

What is your niche or specialty, that makes you stand out from rest of the audio professionals?

Hard question since I did so many different projects. First, I think that my versatility and the fact that I developed a system to deliver real fast made my name in the business. Also the fact that I play five instruments makes me look good! I recall doing a few teen movies a dance movie and I must say that I love the different genres. Could be a big rock track or a hip-hop one or it can be a sentimental piano with strings… I have fun with them all. I also love to compose orchestral adventure music, so energetic!

I work with logic pro 10 and all the native instruments and software. I use Maschine studio for my drum tracks And Komplete Control (an amazing Native instruments controller). Additionally, I have a drum set with all the microphones “on” whenever I need to lay down a track. I love hardware compressors and real guitar amps. All my guitars are recorded with my old Fender Blues deluxe or my Bogner for more modern sound. Since I play every instrument, I have switch boxes and extra screens so I can go in the booth and control the computer and mix while I’m recording or singing tracks. It’s a fast way to deliver!

I use Kontakt 5 Everyday. Native instruments have a bunch of amazing sounds but there’s also 3rd party that makes incredible soundbanks that Kontakt can read. I also Love Spectrasonics Omnisphere for ambiance synth sounds. I mostly mix with the Universal audio’s UAD Plugins.

Through all the steps that a modern composer has to go trough, I’d say my most creative time is when I’m in the act of composing and playing with the sounds; that gets my creative flow going. We have to be technicians, engineers, troubleshoot all the equipment and software… that’s definitely not my favorite part.

What is your usual process for creating audio content for TV, films etc.?

A big part of the job is to do research for sounds, I usually take a week or two and just scroll through my library of sounds to find what I need for the project. Then, then as the images come in the rest happens! I need to focus and be very receptive of what the scene is about. For example, I need to know exactly when and where to start and when/where to stop. You need to have instinct and taste. I then record tracks one by one like if it was painting, I put some colors and develop every idea as it comes. Then I take out some stuff and tweak everything so it fits perfect for the scene. After that there’s the mixing…

Can you tell us about your latest project?

I am working on the new Crackle series “The Art of More” starring Dennis Quaid and Kate Bosworth. It’s a very interesting gig for a composer because the action is in a high-end auction house. The main Character (Christian Cooke) has a double life. So it’s challenging to find the character a theme that fits in both sides of his persona; one second he’s living a respectable lifestyle and another he’s stealing some art at 4 a.m.! There are a lot of action scenes and that’s fun to work with! I did a mix of electro and classical stuff with dirty drums and bass mixed with classy strings. It’s an amazing project!

I really work instinctively. I lay down as much ideas as I can and then I work with what’s there. Sometimes it gives me other ideas so I take a different road… It’s always a work in progress.

I remember a song that I had to do for a dance movie. The director wanted a blues song and the producer wanted hip-hop one. To make them both happy I recorded a slide guitar and a harmonica in my blues guitar amp, then switched to a big hip-hop beat with a rapper on the top! It was interesting to blend organic stuff played through an amp and then make a huge beat with Maschine studio!

Yes I learned that when you have a “B” plan to suggest to the producers, they feel in good hands with you. You need to be creative and have ideas in the drawer in case! Like the blues/hip hop track I explained earlier. That was a great lesson! They were almost fighting about this while I was at my studio creating the perfect blend of both styles. They were dazzled to see that I took both comments and made a messy situation become a great compromise and ultimately a success.

I would say to never turn down a project, research all your options and reason to do so first. At the beginning of my career, a filmmaker called me to compose music on his short film that had no budget. Literally zero money. Everybody around me told me to decline and tell the guy to forget it. So I did exactly the opposite, I did it and I used the work I did to make myself a demo and have something to show future. From that short, my whole career started! So when you begin in this business, take everything that comes your way! You may not earn money, but you’ll earn experience and develop your skills.

In this interview, we talk to composer Brandon Roberts about his work on Unbroken: Path to Redemption - An unbelievable true story of Olympian and World War II hero Louis Zamperini. END_OF_DOCUMENT_TOKEN_TO_BE_REPLACED

In this interview, we talk to composer Kurt Oldman about his work on a SuperMansion series and also touch on his past work. END_OF_DOCUMENT_TOKEN_TO_BE_REPLACED

In this interview, we talk to Gaayatri Kaundinya about her work as a composer and singer on The Hundred Foot Journey, Jungle Book and Million Dollar Arm. END_OF_DOCUMENT_TOKEN_TO_BE_REPLACED