Today we will be looking at a new instrument from Strezov Sampling called Macabre solo strings. Is it worth your time and money or is it something you should pass? Let us have a look.

Macabre solo strings is a relatively small sample library weighing in approximately 3,7 GB and features three solo legato instruments (Cello, Viola and Violin). Although I would prefer that all three have a bit more articulations, Macabre only offers a legato patch (long form legato and portamento) which works pretty well. Cello offers only one legato patch.

All three instruments have a very specific sound (Macabre feeling) and they shouldn’t be mistaken for a regular solo string library. I will talk more about the sound later on. Let us focus first on the graphic interface instead.

The graphic interface is minimalistic which means you dive straight into playing the instrument rather than tweaking the sound. This of course presents an issue for someone who likes to tweak the sound.

There are basically two sliders which control the two mic positions (close and far), a panning slider and few buttons which basically turn the sounds on or off. You can choose between the legato or ensemble sound by simply ticking the “legato” button or you can activate or deactivate the release sounds. You also have the option to solo, mute or purge the sound which is quite handy if you own a low specification PC.

A nice dark background keeps reminding you that you should be sad at all times while playing this instrument. Overall the graphic interface is nice and minimalistic which I generally prefer. 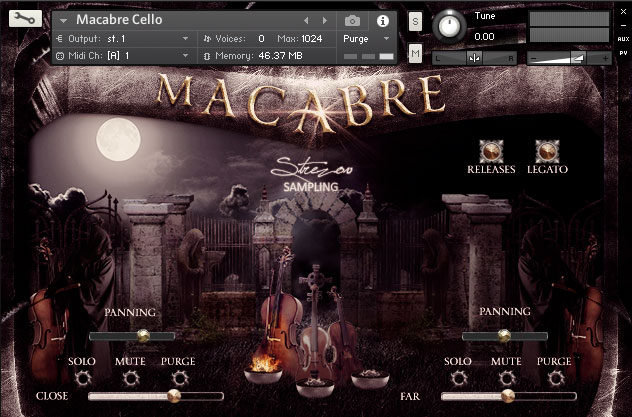 The sound of Macabre is different from what you are used to. It has this ominous, sad tone to it which at some point will alter your mood. The mood you will be in will most likely affect your playing style which I can only give props to Strezov Sampling for achieving that (even if unintentional). Of course the playing style will only depend if you are seeking to create that dark and sad feeling.

The legato patches sound fairly realistic but you do not have any more control other than on or off button for the legato so you cannot control the “slide” between the notes. At some point, especially when you solo the far mic, you will hear some background noise but it is somewhat minimalistic. When you set the max gain on the “close” mic you also hear some bow and string ticks (fingers touching the string) which can be annoying at times but can add certain sense of realism.

All three instruments are also recorded in their idiomatic instrument ranges (Concert G3-G5 on Violin, Concert C3-C5 on Viola, & Concert G2-G4 on Cello) which is quite cool.

Macabre like most libraries is plug and play but you will have to practice a bit in order to get out the desired sound. By that I mean that the samples give an impression of a loop sample. That impression is caused by the fast bow changes on a single note that Strezov Sampling decided to record. As such you will have to time when to move to the next note. All of the samples are also recorded for a more slow play rather than making fast arpeggios or movements (although possible but the sound won’t have any bite to it) so you should keep that in mind when purchasing this library.

A cool thing about Macabre is that the library is very light weight so you shouldn’t have any problems running it on a low specification machine. 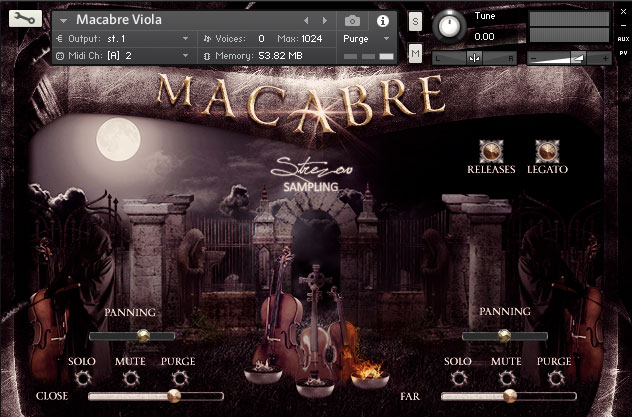 Macabre solo strings is valued at 179 US dollars which is quite high for a double articulation (long form legato and portamento) library but on the other hand you do get three instruments which work well together (being that those were recorded in the same setting). The final decision will of course be yours.

Macabre solo strings is a good library with a fairly realistic sound and great graphic interface with minimal room to get lost tweaking the sound. The sound is very particular to the genre (Macabre that is) and as such you should know what you are getting.

I cannot say that the price is a no brainer but I can say that you surely do get a lot from it (3 instruments). There are also what I consider issues with Macabre that cannot go ignored like some room noise and fingers touching the strings. Yes, I know some feel that is natural with which I agree but those don’t happen on every note and when you put all of the instruments together you end up with a lot of room noise which you will have to clean afterwards.

Overall, like I said, the Macabre solo strings is a good library and if you are on a hunt for a such a library then this should fit right into your template. 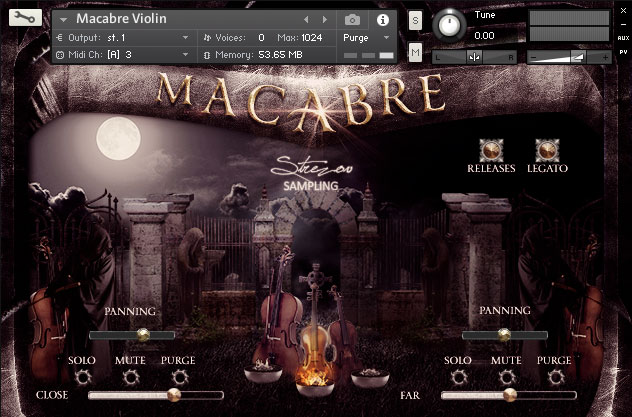 Read our interview with Strezov Sampling. Don`t forget to rate the product yourself if you bought it in the “Reader rating” tab below!
Check out our sample library database for more alternatives
Click here for more news regarding Strezov Sampling.
Macabre solo strings review